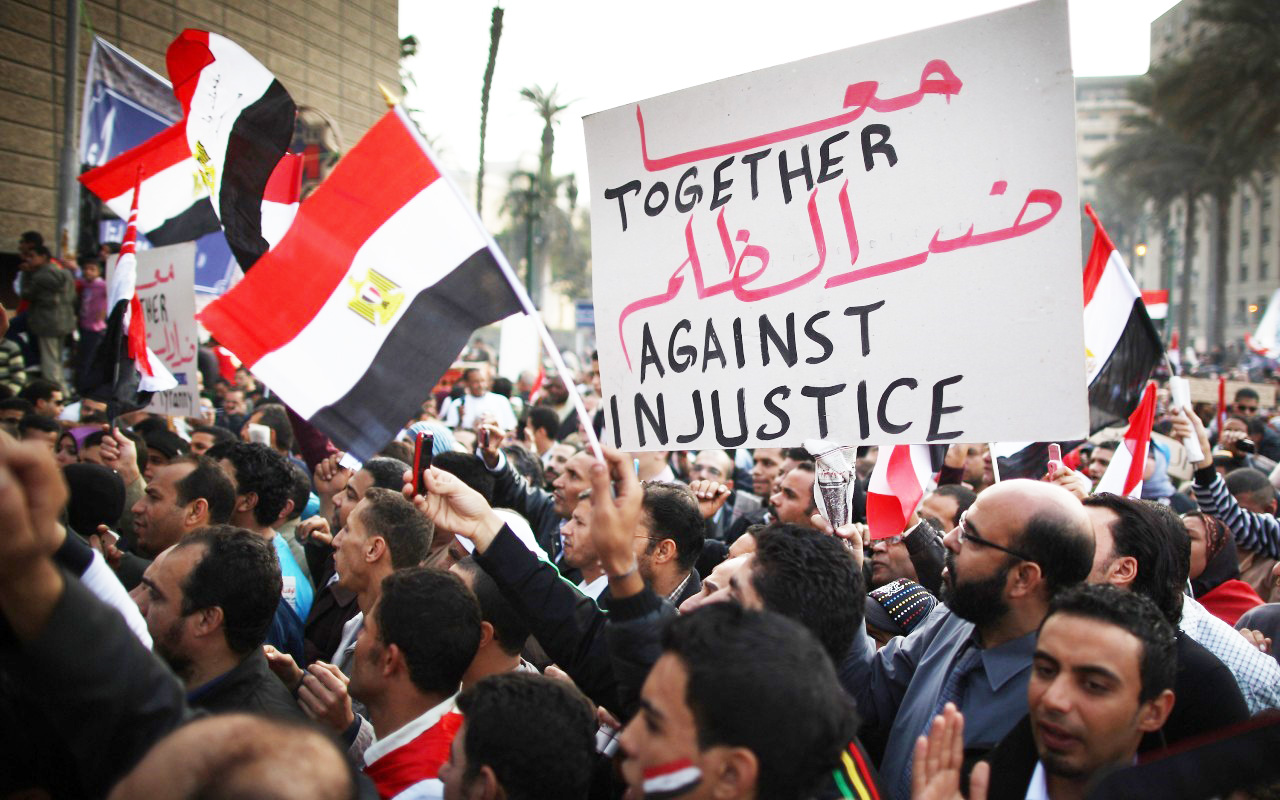 CALLING THE OCCUPATION of Tahrir and other urban squares in Egypt and the January-February 2011 ouster of former president Hosni Mubarak a “revolution” — as is common — is not a helpful characterization of the events. The terms Arab Spring and Arab Winter are even less helpful because they obscure the social struggles of the decade preceding Mubarak’s ouster, which continue today.

According to the Arab Network for Human Rights Information, in the last quarter of 2020 there were 73 labor (33) and social (40) protests, including 11 strikes.(1) This is considerably fewer than the pace of collective action from 2004 to 2016, and many protests suffered severe repression. But it’s a much higher level of social struggle than during the Nasser, Sadat or the first two decades of the Mubarak eras.

The popular uprising of January 25, 2011 was partly, although not necessarily consciously, directed against neoliberal Washington Consensus economic policies. In that sense it is comparable to and continuous with the “Bread Intifada” of January 1977, one of the earliest of the roughly 150 anti-IMF food riots from the late 1970s to the early 1990s.

The clearest expression of this political economy-driven element in the uprising was the nearly 3500 collective actions, including 570 strikes involving some 2.5 million workers, from 1998 to 2010.

Nonetheless, as labor lawyer, former presidential candidate and former director of the Egyptian Center for Economic and Social Rights, Khaled Ali perceptively observed, “The workers did not start the January 25 movement because they have no organizing structure…. [But] one of the important steps of this revolution was taken when they began to protest, giving the revolution an economic and social slant besides the political demands.”(2)

Most Western observers ignored or minimized this aspect of the uprisings in Egypt and Tunisia, where it was particularly pronounced.

The January 25 uprising was also linked to the more overtly political protest movements of the 2000s, animated primarily by the young urban intelligentsia: solidarity with the Second Palestinian Intifada; opposition to the 2003 Iraq War; Kefaya — the Egyptian Movement for Change, whose peak of activity was 2004-06; support for the Judges Club’s criticism of the 2005 elections; Mohamed ElBaradei’s National Association for Change; the 2010 “We are all Khaled Sa’id campaign,” etc.

This genealogy of social protest encompasses demands for democracy and government respect for the dignity of citizens, especially curbing routine police brutality and torture, and an anti-imperialist foreign policy.

The mass demonstrations that erupted on January 25 could not have become a revolution, because the great majority of the movement’s supporters had no common organizational framework or political program beyond the ouster of Mubarak.

Under the best of circumstances, Mubarak’s ouster alone could not have resulted in a regime change. Most participants in the uprising — both workers and the urban intelligentsia — did not understand the character of “the regime” whose demise they sought. This was exemplified by the deeply misguided slogan: “The army and the people are one hand.” That slogan blocked people from understanding that Mubarak’s removal was as much a coup as due to popular pressure.

Another reason why the popular uprising of January 25 could not become a revolution is that the social movements of the urban intelligentsia and the workers were largely detached from each other.

In the 2000s there were brave, even heroic, efforts to support and spread the ongoing strike movement by poorly resourced NGOs like the Center for Trade Union and Workers Services, the Coordinating Committee for Trade Union and Workers Rights and Liberties, and the Egyptian Center for Economic and Social Rights, a small number of individuals like Kamal Abbas, Kamal Abu Eita, Khaled Ali and Fatma Ramadan, and journalists aligned with the left like Hossam el-Hamalawy, Mostafa Bassiouny, Jano Charbel, Faiza Rady, and Adel Zakariyya, among others.

There was an increasing degree of coordination and collaboration between the workers’ movement and the left and democratic forces after the formation of the Egyptian Federation of Independent Trade Unions (EFITU) on January 30 and the ouster of Mubarak on February 11. In addition to the organizations and individuals mentioned above, the Egyptian Initiative for Personal Rights actively supported the workers movement.

Collaboration strengthened as the number of strikes and collective actions soared from February, 2011 until the July 2013 military coup that overthrew the elected president Mohamed Morsi. But this was insufficient to link the two streams of social protest in a way that resembled the coalition of workers and intellectuals in Poland’s Solidarity movement that was forged over the course of a decade or more.

Moreover, as had been the case since the legal left party Tagammu’s decision to back Mubarak against the Islamists in the early 1990s, most liberal, left and feminist forces at first supported the July 2013 coup and aligned with autocracy against Islamism.

The inability of these forces to break out of the devil’s choice between Islamism and nominally secular autocracy has weakened opposition to autocracy for over 30 years and continues to do so. The “officers’ republic,” as Yezid Sayigh dubbed it, is now more firmly entrenched and more tyrannical than in the Mubarak era.

The government installed by the July 2013 coup appointed Kamal Abu Eita, then president of EFITU, as Minister of Manpower and Migration. Most of the left mistakenly considered Abu Eita’s appointment a victory. Only a minority — most vocally, Fatma Ramadan — were critical of Abu Eita because after becoming a minister, he spoke out against striking.

Abu Eita’s dismissal in March 2014 made it clear that the coup leader and now president Abdel Fattah el-Sisi was not interested in substantially accommodating the needs of working people. In fact, given the economic situation and the demands of the Saudis and Emiratis who had showered some $12 billion on Egypt, that would have been very difficult even for a government inclined to do so.

The strikes of the 2000s — and the escalating workers’ movement after Mubarak’s ouster — could not play a leading role in the popular uprising or turn it in a more radical direction, as many on the left imagined they could.

This was in part because until the formation of EFITU on January 30, 2011 there was no organization that could credibly claim to represent a large number of anti-regime trade unionists. EFITU was too new, inexperienced, and largely unfamiliar to workers beyond greater metropolitan Cairo, and a few other working class centers like Sadat City and Mahalla al-Kubra, to fulfill this task.

Even more importantly, the demands of public sector workers (the main force in the strike movement, though it was much broader than that) were backward looking. They wanted a restoration of the Nasserist social contract.

Rather than raise demands for democracy or other critiques of the Mubarak regime (with some exceptions), protesting workers often called for the government, and even specific ministers like Minister of Investment Mahmoud Mohieldin, to intervene.

Sometimes they achieved their demands in this way. So they did not learn anything about the character of “the regime.”

Nonetheless, there were sharp upsurges in workers’ collective action in the first quarter of 2014. Even though far fewer than in 2011 and 2012, strikes and other collective actions remained well above historic levels throughout 2015 and 2016. These actions were locally led with no national leadership or strategy.

Ten years on from the start of the Middle East and North Africa (MENA) uprisings, both neoliberalism and autocracy remain in place throughout the region. Even in Tunisia, conventional wisdom notwithstanding, a weak procedural democracy provides a screen behind which many figures from the Ben Ali regime have restored their power.

Therefore, the issues that prompted the 2011 uprisings are still on the table. Since then, struggles have continued to erupt over the prevailing failed mode of capital accumulation and governance.

The 2017 hirak rif mass protest movement of Imazighen (Berbers) in Morocco, the 2019-20 uprisings in Algeria, Sudan, Iraq and Lebanon — and in January 2021 the third (or perhaps fourth) wave of popular mobilization against neoliberal policies in Tunisia since 2011 — illustrate the unfinished character of the Arab uprisings.

It will take many years before their final outcome is determined.

France began its trajectory towards a republic in 1789, but that republic was not securely established until after 1870, and resistance to it persisted until the mid-20th century. There is no reason to expect the Arab region to transform itself more quickly, whatever the end result may be.

One thing that appears to have changed is that whereas in 2011 Egypt was a leading factor in the spread of the popular movement to other Arab countries, it is no longer playing that role. In part this is because the Sisi regime has repressed all forms of political debate, and in part because the United Arab Emirates and Saudi Arabia have consolidated their grip as the leading forces of reaction in the region, with the full backing of the United States.