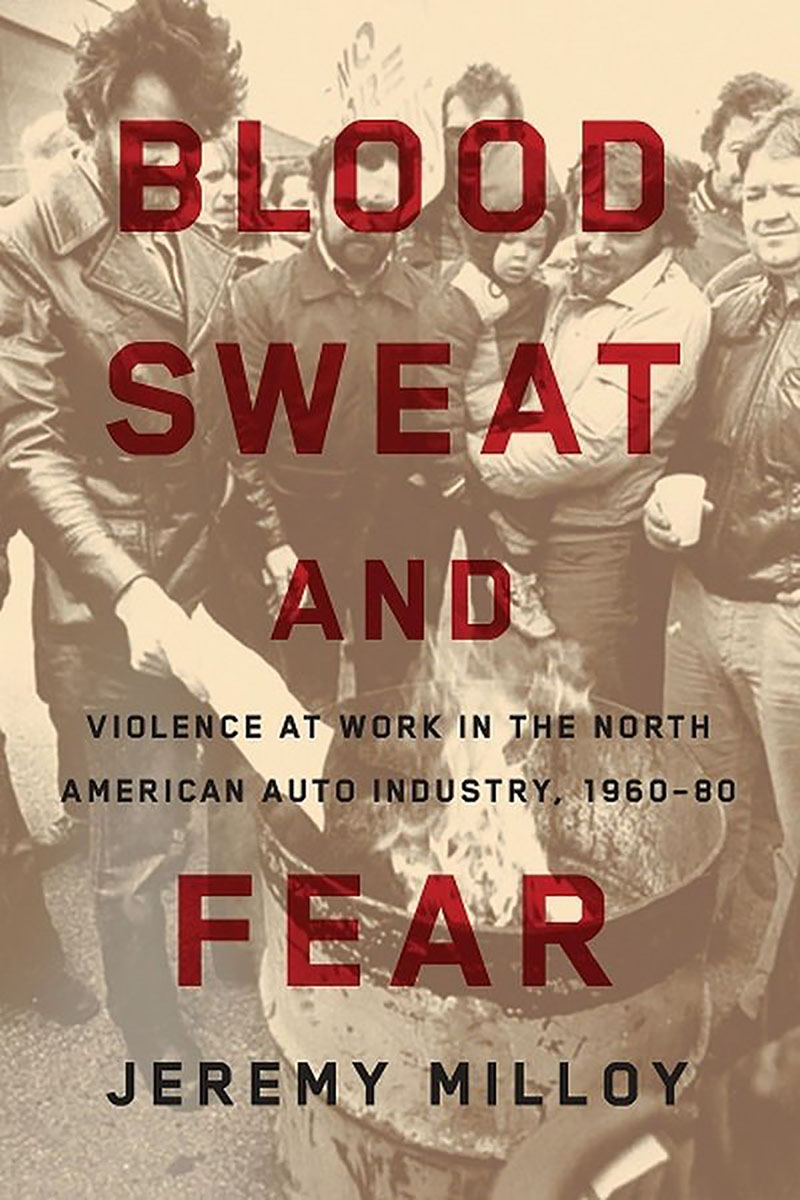 “THIS JOB IS killing me.” That’s a phrase many workers have uttered, though what prompts such a dismal sentiment can vary: perhaps the numbness engendered by tedious, repetitive labor; or a grueling commute combined with an irregular schedule; or bigoted bosses who harass and belittle. Yet for some workers the danger is even more literal and immediate, as their jobs present a daily, imminent threat to life and limb.

At the outset of the pandemic in 2020, the particular hazards of COVID exposure faced by frontline workers received a brief flurry of public attention. But as that focus has receded, so has the recognition that for many workers, their jobs are literally life-threatening, and not only when there is a deadly virus afoot.

That’s why Jeremy Milloy’s historical study Blood, Sweat and Fear: Violence at Work in the North American Auto Industry, 1960-80 has special resonance at this moment. “Confronting the history of workplace violence under capitalism,” Milloy, a postdoctoral research fellow at Mount Allison University in New Brunswick, seeks to reframe our understanding of the dangers that workers are obliged to endure, and urges us to reconsider just who bears responsibility for them.

To do so he zeroes in on a period when the production of automobiles in Chrysler plants was an especially hazardous endeavor, and employees dreaded clocking in each day.

In part this was because already onerous working conditions imposed by management were deteriorating even further. But it was also that auto workers in the 1960s and ’70s often feared each other, as the incidence of physical confrontations between workers, or between workers and supervisors, ratcheted sharply upward.

Milloy argues that these were not coincidental developments, for increased exploitation was a root cause of heightened workforce volatility. For workers under capitalism, Milloy insists, violence, in a multitude of forms, simply comes with the job.

But just exactly what does Milloy mean by “violence at work”? Violence, Milloy indicates, is “a culturally constructed phenomenon” which has changed over time and depends on who is defining the term. At the beginning of his book, Milloy delineates three forms of violence that might affect workers.

“Structural violence” refers to the many forms of hazardous on-the-job conditions workers must endure; workplace culture and power relations can be understood as “rhetorical violence;” while the fights, assaults and murders that constitute violence as it is most commonly understood are labeled “physical violence.”

Milloy insists that all three forms of violence are inherently intertwined, and to make his case he provides a comparative examination of Chrysler’s Dodge Main plant in Detroit (or more correctly, Hamtramck) and Chrysler’s manufacturing complex in Windsor, Ontario in the 1960s and ’70s.

Though these facilities were located in different countries, there were nonetheless obvious similarities: same employer, same union — the United Auto Workers — and same general territory, as the two facilities were separated by a mere 20 minute drive across the Detroit River. Nonetheless, Milloy argues, in Detroit and Windsor “there were significant differences in violence’s prevalence, uses, expressions and impacts.”

By all three measures in Milloy’s categories of violence — structural, rhetorical, and physical — Chrysler’s Windsor complex was a safer place.

Those factors traditionally offered up to account for such a variance — like the ways in which violence figures into popular culture or national mythologies, or the differing labor and political histories that characterize Canada and the United States — Milloy deems to be “relatively unimportant.”

Rather, the crucial distinctions, he argues, were “the greater in-plant impact of racial inequality” and “Chrysler’s greater power to dictate working conditions” in Detroit.

The Windsor Chrysler complex was not violence-free. In those plants, where the workforce was almost exclusively male into the latter 1970s, the “rough culture” that defined much industrial production was on full display. But while physical confrontations to resolve disputes between workers — or sometimes, to intimidate management — occurred in Windsor, they happened infrequently and were most often fist fights; weapons were rarely involved.

There were few Black employees in Windsor, so racism, either within the workforce or as might be manifested by management, was not a divisive force there. Moreover, Milloy indicates, working conditions in Windsor were far better for auto workers than was the case in “Detroit’s decrepit, dysfunctional Chrysler plants.”

In large part this was due to the Auto Pact, negotiated between the United States and Canada in 1965, which obliged Canadian plants to maintain production and workforce levels during the same period that the U.S. economy was heading toward widespread deindustrialization. Consequently UAW Local 444, which represented Chrysler workers in Windsor, was empowered to contend with management to enforce “a safer, saner work environment,” thus reducing the amount of structural violence Canadian auto workers experienced.

Things were far different at teeming Dodge Main, which is the central focus of Milloy’s study. By the late 1960s, serious physical violence — of the sort often involving knives and guns, and might well result with workers sent to hospitals — had become so commonplace at the plant that it became the subject of national media attention.

Much of the reporting then presumed that the trouble within Dodge Main was largely reflective of the larger crime problem plaguing Detroit, but Milloy insists that the root cause was the plant itself.

Chrysler management responded to the increase in foreign competition that began in the 1960s by making its production employees work harder and faster, and thus an already unsafe factory became even more hazardous and stressful.

Milloy makes especially good use of grievance records to paint a grim picture of brutal conditions in the shop; “I guess you must work until you drop dead,” Milloy quotes one UAW steward in a grievance report. “It is like working in a concentration camp.”

But Milloy notes that Chrysler also instigated changes in its hiring processes that escalated tensions in the plant. More recently hired African American employees — who would make up nearly half the Dodge Main workforce by 1968 — were relegated to the second shift, and compensation for this newer group of workers was less than that enjoyed by first-shift workers, who were older and mostly white.

The resentment and division fostered by Chrysler’s employment practices turned an already edgy workplace into a tinderbox. UAW Local 3, the union at Dodge Main, as Milloy details, proved utterly incapable of responding either to the deterioration of working conditions or the rise in racial conflict.

The only response the bureaucratic UAW offered to punishing working conditions was a ponderous grievance procedure, and Blacks attempting to confront racism — within both the company and the white workforce — met with indifference, or worse, from most union officials.

UAW leaders viewed physical violence on an individual level, rather than as symptomatic of class and racial oppression, and searched vainly for ways to impose order on the membership. The Dodge Revolutionary Union Movement (DRUM) was born as a result, and this radical Black workers’ organization provided the sort of structural analysis that the UAW did not.

To DRUM, as Milloy describes, the pervasive violence in the plant “was a product of the dangerous, degrading work environment at Dodge Main and the larger structures of capitalism and white supremacy.” Sharper analysis, however, didn’t prove enough to quiet the violence within Dodge Main; only the shutdown of the plant in 1979 did that.

Milloy’s rich and detailed study properly reminds us that the workplace is the primary source of capitalist exploitation, and thus we need to pay close attention, as he has, to what workers actually experience on the job to understand the mechanisms that enable that exploitation.
There are some weaknesses in Milloy’s analysis: at times the distinctions between the categories of violence he utilizes becomes hazy or confusing, or “violence” comes to be such an all-inclusive term (layoffs and poverty in general sometimes seem to fall under that umbrella as well) that the concept threatens to lose its meaning.

And while Milloy emphasizes racism as a principal explanation for the violence at Dodge Main, and is sensitive to the anger and frustration voiced by Black workers, he does not center women’s experiences and sexism in the same way. That there were almost no women at the Windsor complex, and only a small cohort confined to particular jobs at the Dodge Main plant, is of course a reflection of patriarchal hiring practices that also contributed to the “rough culture” of the shops and the violence within them.

Milloy does provide some examples of the harassment and sexual violence faced by women at Dodge Main, and indicates how the UAW, and even DRUM, not only failed to respond but often perpetuated the problem. But foregrounding sexism as much as racism might have enhanced Milloy’s study.

Of course through the 1960s and ’70s the most violent actor of all was the federal government, as was made increasingly manifest by the escalating carnage of the Vietnam War during those turbulent decades. Yet how this martial zeitgeist contributed to the overall atmosphere within Dodge Main (and how the different political situation in Canada, conversely, might have lessened tensions in Windsor) is not a subject Milloy touches on, nor does he consider if Vietnam veterans working at Dodge Main may have been especially prone to hostile behavior.

Milloy rightly wants to focus on the structural underpinnings that contribute to individual acts of violence, but surely our blood-soaked foreign policy, and the aggression inculcated by the military within the (disproportionately minority) population of young men who served in Vietnam, is part of this larger picture.

But Jeremy Milloy has contributed something quite valuable with his book, refocusing attention on a subject — violence — that has become so commonplace that it may have seemed as if there was nothing new to be said about it. Those explosive moments when workers have “gone postal” and wreaked havoc at their workplaces, Milloy argues, should not be attributed to isolated moments of individual crisis, or written off as some inherent tendency of Americans to solve their problems with gunfire.

Milloy’s examination of auto manufacturing makes clear how the work process under capitalism — the jobs that people hold, and the ways they are obliged to do them — is in itself steeped in violence, leaving workers injured, exhausted and bitter. It should thus not come as a shock that some workers respond to the violence they are subject to on the job with more violence.

Maybe the only surprise is that more of them don’t react that way. “My job is killing me:” when workers say that — whether they’re in factories, or hospitals, or Amazon warehouses — they really mean it.