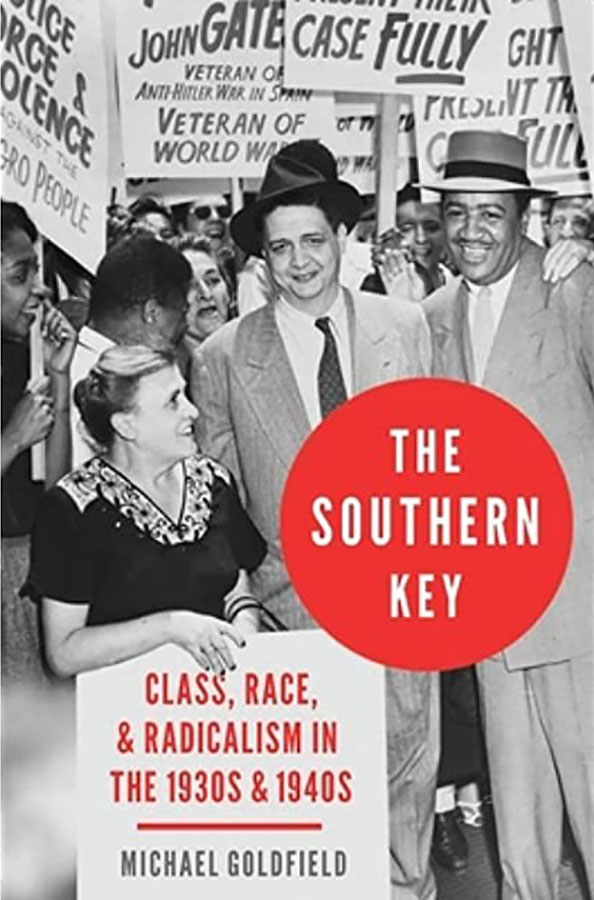 Just look at a recent COVID map, which traces directly onto maps charting slavery, sharecropping, segregation, disfranchisement, incarceration rates, 1948 votes for Strom Thurmond, 1964 votes for Barry Goldwater, and much else besides.

This isn’t exactly a novel interpretation, as a very long list of sociologists, political scientists and historians, many acknowledged in this book, have made this point sufficiently. It is fair to say that this has become the reigning orthodoxy in the historiography of the southern labor movement during its heroic CIO moment (1936-1955).

Contested Role of the State

While recapitulating this well-established framework, Goldfield’s book still has something to offer. Most previous studies rest this conclusion on the study of a single industry, state or locality. Goldfield’s account, drawing on years of research and synthesizing a huge swath of existing scholarship, covers coal, steel, textiles and the paper industry, all sites of protracted struggles to build interracial unions in the segregated south. If the broad conclusions he draws about the long-term consequences of the failure of these organizing drives mirror that of other scholars, the author offers some important reinterpretations of the reasons for this failure.

Where Goldfield claims to depart most dramatically from existing scholarship is in his account of the role of the state. In his view, the importance of the National Industrial Recovery Act in 1933-1934 (particularly section 7a, making joining a union a federally sanctioned right) in prompting southern workers to overcome their fears and seek union membership has been vastly overstated in the literature.

He extends this skepticism to the 1935 Wagner Act, which ostensibly enshrined this right in federal labor law.

Looking closely at pre-NIRA organizing drives in the coalfields, for example, Goldfield concludes that whether sparked by Communist Party (CP) militants or long-time local stalwarts on the ground, miners seemed primed to build unions before the Roosevelt Administration opened the door, but he is hardly the first scholar to point this out. Indeed, at times it can be hard to reconcile Goldfield’s assertion that established scholarship ignores this dynamic with his heavy reliance on that same scholarship, much of it quite old-fashioned.

When it comes to the Textile Workers Organizing Campaign of 1937-38, he argues that a CIO leadership prone to put its faith in the National Labor Relations Board missed a golden opportunity to tap into organic militancy in the southern mill towns.

Secondly, Goldfield wrestles with the role of the Communist Party and the related anticommunism that proved a major obstacle to left-wing leadership in nascent CIO unions. He recognizes, for instance, that the story of the unionization of the steel industry requires not only acknowledging the activism of CP organizers in the early phase, but also consideration of the Party’s errors which left its militants vulnerable to a subsequent purge of the USWA (United Steel Workers of America) by more conservative forces once the steel magnates were forced to the bargaining table.

In particular, Goldfield argues, during the mid-to-late 1930s Popular Front the Party’s “acquiescence without a struggle” to the hegemony of liberals like Steelworkers President Philip Murray “paved the way for the dominance of right-wing, racially insensitive” leadership.” (179) Similarly, Goldfield maintains, in the fight to organize woodworkers the CP’s “surrender to the CIO rightists” and “the maintenance of the Popular front” (240) sabotaged the potential for organizing Black workers in the South.

Although he does not shy away from detailing the “self-destructive sectarian behavior” (350) of the CP, Goldfield nevertheless endorses the notion that the Party’s true role as a spark to labor militancy peaked during its ultra-sectarian phases — i.e. the Third Period (1929-1933) — and was then squandered when the Party followed Soviet dictates to make nice with those to its right, like Roosevelt liberals or moderate CIO leaders.

After 1935 the Party “often abandoned its members in order to preserve harmonious relations with national CIO leaders,” Goldfield complains. (358) Such subordination, Goldfield insists, not the CP’s political adventurism, sectarian zigzags and constant injection of political causes of little interest to the rank and file, facilitated the purge of the left from the CIO.

This critique of the Party’s Popular Front labor politics from the ultra-left is, to put it bluntly, perverse. And yet, during the Third Period, Goldfield avers “a less sectarian Communist Party…would have had far more influence and support.” (351) Yes, but then it wouldn’t have been the Communist Party.

Whatever the causes of the Party’s vulnerability, the consequences of the anticommunist purges were significant. In steel, Goldfield insists, despite the crucial role Black workers had played in building the union, by the postwar period, USWA leadership at best ignored them and at worst perpetuated racism within the union.

Oddly, Goldfield suggests that the USWA has been held up by many scholars as a “democratic” union, and claims to offer a bold revision by demonstrating otherwise. Yet it has always been widely recognized that because of the way SWOC (Steel Workers Organizing Campaign) was organized and consolidated the union structure was top-down and autocratic — as the many accounts of the USWA which he draws from indicate.

In organizing his analysis by industry, Goldfield eschews cultural explanations for the behavior of southern white workers  — e.g. individualism or religiosity — and focuses instead on the structural factors that encouraged or impeded organizing at the regional, local and even plant level. This allows him to avoid the deus ex machina of an ill-defined “culture” as the explanation for (white) southerners’ alleged hesitancy to join unions.

Protestantism, for example, could cut either way, depending on circumstances, as could resistance to being told what to do by outsiders (who could be owners of capital as well as labor militants), depending on the time and place.
One week a fire-and-brimstone sermon might be devoted to the CIO as antichrist; but the following Sunday, workers might find a local or itinerant churchman happy to preach the union gospel to an eager audience. Which one represents southern ” culture”? As Goldfield insists, southern workers “when they had sufficient structural and associative power, were often as ready and able to unionize as their compatriots in the North.” (289)

Global comparative analysis by industrial sector also helps steer The Southern Key away from the shoals of foggy cultural explanations. For example, as Goldfield points out, textile workers from Gastonia to Guatemala worked in a labor-intensive industry that could only seek profits in a highly competitive sector by ruthlessly reducing per-unit labor costs.

Some of this astute analysis is diluted by Goldfield’s all-too frequent meanderings away from southern history, so that readers may lose this main thread of the story. In a lengthy chapter on SWOC, for example, Goldfield spends far more time on the well-told story of the steel towns from Chicago to Western Pennsylvania than he does on Alabama, the heart of the industry in the South.

If Goldfield’s book has the potential to reconfigure our understanding of the “southern key,” it lies in a shift in periodization. Whereas most scholars still see the defeat of the postwar southern organizing drive, popularly known as “Operation Dixie,” as the turning point in the fortunes of mass industrial unions in the South, Goldfield now argues that this was more a feeble culmination of previous trends than the crucial do-or-die moment many have assumed it  to be.

He correctly regards as crucial the “associative power” — what others might call “social unionism” — lent to the labor movement by the wide array of militant organizations during the Depression, including in the South. The CIO’s unwillingness to work with the left and civil rights activists during its postwar southern organizing drive, especially in textiles, Goldfield argues, hamstrung its operations while doing nothing to shield it from red- or race-baiting by employers, the press, or its AFL rivals.

The futile accommodation to racist whites, and the failure to reach out to Black workers, also weakened the union drive.

This is all true, as far is it goes, and much of it has been said before. However, Goldfield remains mute about the impact of the culmination of all this ferment, the Progressive Party’s 1948 doomed southern campaign, during which some left-wing organizers sought to swing the political weight of the new southern unions in the direction of Henry Wallace (Wallace, George, appears in the index; Wallace, Henry does not).

The national CIO backed Truman, but CP unionists and their waning allies demanded that their locals endorse Henry Wallace; the segregationist Strom Thurmond won the Deep South states. More attention to the Wallace campaign, and the divisions it occasioned on the left wing of the CIO, would demonstrate the left’s political adventurism at this moment.

One problem Goldfield does not grapple with sufficiently is the widespread assumption that the defeat of the southern unions expunged any economic orientation from the civil rights movement that arose in the 1950s and 1960s. In his desire to demonstrate that the driving of militants — CP or otherwise — from the labor movement ended all left-labor civil rights activism, he simply asserts its disappearance.

Of course, significant union density and more powerful interracial unions in the South would have added an important dimension to the so-called “King years” of the movement. In fact, however, the civil rights struggle remained consistently about “more than just a hamburger,” and even with the relative absence of left-wing militants or trade unionists in its front ranks (and they were by no means eliminated entirely), continued to emphasize economic rights.

E.D. Nixon’s persistent activism in Montgomery in the 1950s is but one example; Dr. King’s call for a general strike in Memphis during the 1968 sanitation workers’ strike is another. In between came the 1963 March on Washington for Jobs and Freedom.

Despite the enormous amount of material brought between the covers of The Southern Key, ultimately the book confirms an existing interpretation, one that remains badly in need of revision.

In this account the early CIO unions in the South, led by the left, bore the promise of interracial democracy. If permitted to flourish, they would have transformed the South, breaking the hold of the Dixiecrats on the Democratic Party as early as 1948. But anticommunism got in the way, as liberals purged the left from the new unions, thus sapping their interracial promise.

The result was a delayed civil rights movement, and one that remained aloof from questions of class and political economy. Elements of this narrative are certainly accurate; I have made a variation of this argument myself.

But by now we need a more sophisticated version of this history, one that pays sufficient attention to the left’s postwar miscalculations, acknowledges the quixotic nature of the Henry Wallace campaign in the South, and recognizes the persistence of the impulse for racial democracy inside the trade union movement and its allies, even in the absence of the Communists, who may at times have done more harm than good.