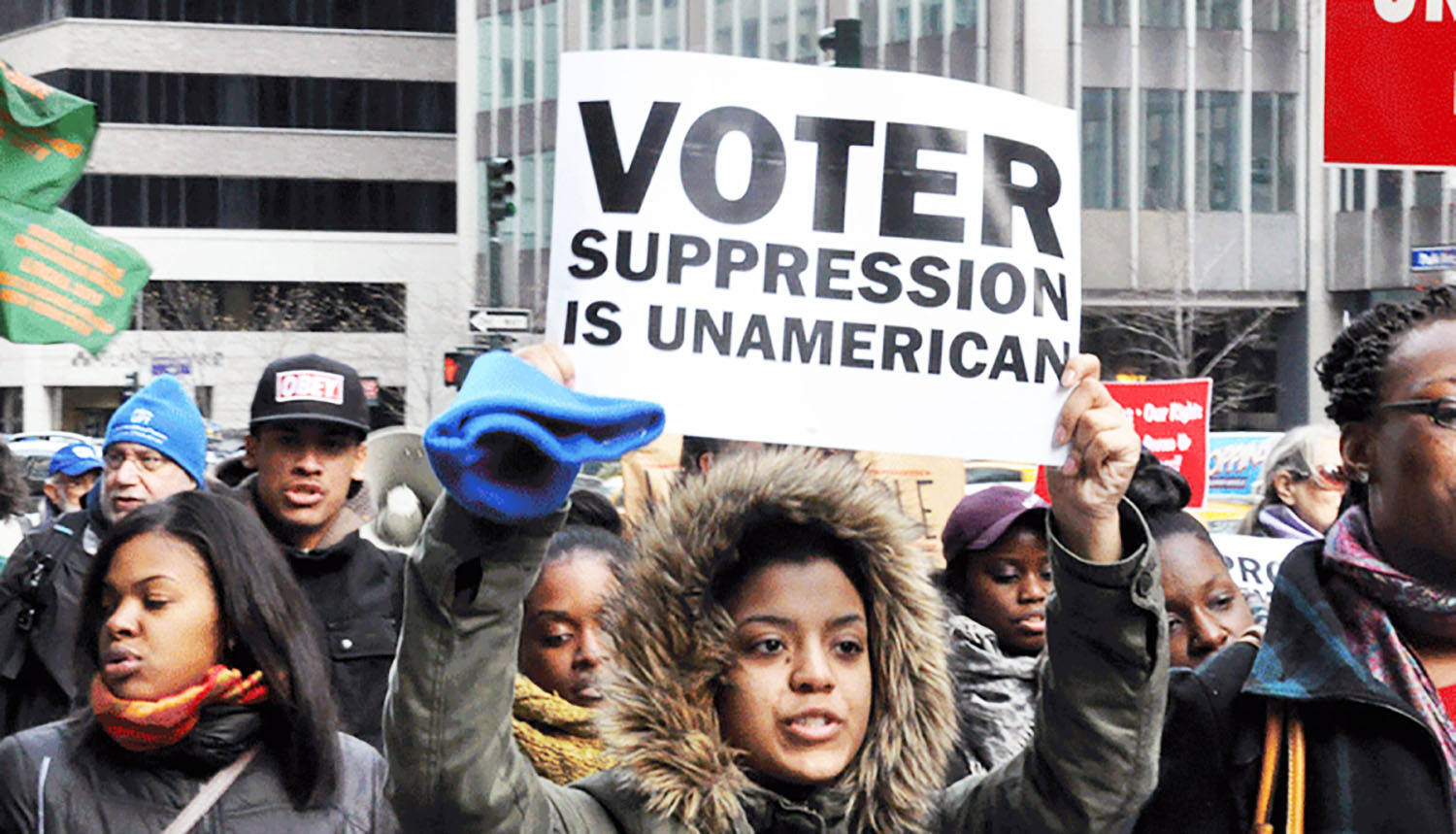 BY THE TIME this editorial statement reaches the readers of Against the Current in print, there may or may not be a result of the 2020 presidential election. There may — or may not — be wildly chaotic legislative and court battles in multiple contested states. There may — or may not — be street battles involving white-nationalist armed mobs, fueled by conspiracy theories, mobilized to preserve a defeated presidency.

In this Trumpster fire of a political year, the difficulty of prediction is partly that much of the Republican Party has morphed into something close to the French National Front or German Alternativ für Deutschland — parties of the racist far right which, by establishment consensus, are excluded from national government although they may be regionally or locally powerful. In the U.S. context, the human and political damage of the past four years is severe enough — but the full extent of the menace remains to be tested.

The “September Surprise,” Trump’s rush to fill the Supreme Court seat after the death of Ruth Bader Ginsburg, raised the explicit possibility of his using the Court to halt the vote count and steal the election. At the same time, Barton Gellman’s extensive piece in The Atlantic (September 23, 2020), “The Election that Could Break America,” shows how much of the post-election struggle could become a knife fight with few clear rules and no ultimate deciding authority.

Many scenarios were already contemplated and game-played in various locations, in the greatest detail by the Transition Integrity Project (“Preventing a Disrupted Presidential Election and Transition,” August 3, 2020). TIP’s authors warn: “The closest analogy may be the election of 1876 (leading to) a grand political bargain days before Inauguration — one that traded an end to Reconstruction for electoral peace and resulted in a century of Jim Crow, leaving deep wounds that are far from healed today.”

That’s a salient warning of what a “bipartisan” bargain today might look like — and at whose expense. Yet such are the crazy times we live in that the United States in November-December might face a full-scale existential crisis of its constitutional system — or alternatively, that these concerns might vanish like waking up from a bad dream. At this writing there’s simply no way to know, or to predict whether the U.S. capitalist class is prepared to risk the shattering of the legitimacy of its political institutions.

It might well be, especially if Biden’s margin is wide, that the Republican leadership might decline to follow Trump down the path to an extreme crisis. Since he’s already given the ruling class a stacked right-wing federal judiciary and Supreme Court, massive destruction of consumer and environmental protections, and giant tax cuts — but also cost the Republicans their Congressional and possibly their Senate majority — their craven loyalty to Trump may have reached a point of diminishing returns. Instead, he could be forced to exit along with some rotten agreement with Biden not to pursue his past and continuing criminal operations.

If it should come to a post-election confrontation with a defeated Trump seeking to negate the result, it will be the clear responsibility of the left to fully participate in mass mobilizations to defend the vote. Beyond that crucial point of principle, we won’t try here to add to the analyses proliferating online and in print on how the election and its aftermath might unfold.

We’ll focus here first on what we do know, and second on what seems to be the most likely — although far from guaranteed — outcome, a relatively orderly transition to a Joe Biden presidency. Indeed, if the neoliberal corporate leadership that controls the Democratic Party can’t defeat an organism like Donald Trump, it becomes difficult to see the point of their continued existence — except as a receptacle for the massive funds from the mega-donors who set the party’s agenda.

If anyone from either end of the two-party political spectrum believes that the election of their candidate will resolve the multiple calamities confronting this society, we’d like to offer them a reserve stock of hydroxychloroquine for sale cheap.

Wildfires turning Western forests and towns to ash and the skies a toxic orange, sequential hurricanes smashing the Gulf and East coasts, and the less-publicized windstorm (derecho) that blew down Cedar Rapids, Iowa are not freak occurrences. They mark the no-longer-deniable arrival on these shores of the climate change disaster that will become only worse in the coming years and decades.

The coronavirus crisis, even with potential vaccines coming on stream in a few months if we’re lucky, will persist through 2021 — according to relatively optimistic public health and epidemiology experts. By the end of October 2020, official (probably undercounted) U.S. deaths from COVID-19 passed 225,000 and might double by year’s end. The virus death toll falls heaviest on the front-line workers, their families, and on communities of color that also bear the worst impact of a deep economic recession which cannot end until the coronavirus pandemic is contained.

Even before Trump himself contracted a bout of COVID-19, the fact revealed by Bob Woodward that Trump actually knew from the outset that the virus was a serious crisis, which he deliberately hid from the public, is “surprising” mainly in the sense that it isn’t really surprising at all in view of his record. It may also have enabled his pal Jair Bolsonaro, the semi-fascist president of Brazil, to dismiss the virus there as “a little flu,” with devastating consequences for that country and especially its Indigenous peoples.

But even aside from Trump’s criminal indolence and super-spreader campaign rallies, the United States has a health care system that remains the worst-prepared among all the rich countries to handle an infectious disease emergency. The most important lesson of the pandemic and the associated collapse of employment is the desperate public health necessity of universal health care, Medicare for All.

That’s a demand supported by something like two-thirds of the U.S. population, overwhelmingly popular among the Democrats’ base and activists — and zealously opposed by both capitalist parties, including Biden who promises to veto any such legislation that improbably passes through Congress.

There are collateral crises that we’ve discussed in previous and the present issues of Against the Current, including the intractable dilemma of K-12 public education as well as colleges.

Opening up the schools is a deadly menace to teachers and communities, while reliance on “remote learning” deepens already disastrous race, class and geographic inequalities of access to the necessary technology.

Still not fully charted are the enormous fiscal deficits facing state and local governments, for which the Republican-controlled Senate has vowed to provide absolutely nothing.

On top of all this, despite the enormous upsurge of #Black Lives Matter activity and popular support for the struggle, police forces seem enabled to continue and escalate brutal tactics of control and arrest up to and including murder of civilians. The failure to indict the police who killed Breonna Taylor highlights the fact that they were not “rogue cops” — they were acting on the basis of the system’s rules. That illustrates how the system actually works, with all its potential for explosive consequences.

Against this backdrop, what would be the prospects of a Joe Biden presidency, should it emerge from the dust and grime of the November election?

To begin with the obvious: The Republican campaign mantra that “Biden is the captive of the radical left” — standard Republican absurdity in every election, recited with more vicious bile in the Trump era — is the exact reverse of the truth. The Democratic convention established the decisive hegemony of the neoliberal Biden-Obama-Clinton party leadership and marginalization of the “progressive” wing. There was more speech and face time for moderate-Republican-for-Biden figures than for the AOC and Bernie Sanders forces, and that’s not only a cynical electoral calculation — it’s what Biden is comfortable with, as his whole political record shows.

The party platform, for whatever attention anyone pays to it, deleted a 2016 plank for ending subsidies to fossil fuels industries, and maintained unconditional support for Israel despite the increasing alienation of the party’s base, including young Jews, from Israel’s brutal occupation policies and open ethno-nationalist Jewish supremacy. Even worse, the Biden campaign didn’t wait a single day before launching a gratuitous smear against leading Palestinian-American activist Linda Sarsour who spoke at a Muslim-American side event during convention week.

If all that weren’t enough to signal where a Biden administration is likely to go, there’s another factor: An anti-Trump blitz began, as sectors of the U.S. elites (belatedly) responded to the full menace of where Trump might be leading them. The barrage of rushed-into-print books by Mary Trump, Michael Cohen, then Bob Woodward and Peter Szrok was hardly accidental.

To what extent their revelations move the final electoral needle is an unknown, but they indicate the establishment hope that Biden will be the “unity and healing” candidate for a polarized country. Just what he’s supposed to unify it around is a giant vacuum.

In brief, Donald Trump fires up both his own base and the Democratic opposition, while Joe Biden puts much of the Democratic base to sleep. As some figures like Cornel West and Michael Moore have put it, they feel compelled to vote for Biden, “but we won’t lie for him.”

True to form, state Democrats engaged in sleazy power plays to keep the Howie Hawkins/Angela Walker Green Party ticket off the ballot in the crucial states of Wisconsin and Pennsylvania. This demonstrates a characteristic contempt for democracy that’s a big part of why the Democrats have lost so much ground. (A collection of perspectives on the election appears on the Solidarity website, the organization that sponsors this magazine, including results of a poll of its membership posted August 22, 2020.)

Going a bit deeper, we can ask three partly overlapping questions about what a Biden/Harris administration might do in a post-2020 far-from-normal United States.

First, how would a Biden presidency respond to pressures from the party’s “progressive” left wing in Congress? As already suggested, we suspect the answer is “very little if at all.” The question isn’t about nice campaign speeches about “build back and better” or climate change or racial justice, but what a president once in office is prepared to fight for. Nothing we’ve seen indicates that progressive Democrats can make Biden a fighter for anything his “moderate” friends in both parties won’t approve.

Second, how would it respond to the activist movements of these times? Our answer here is “possibly a bit more, because they’ll have little choice.” Of course Biden and Harris will try to force #BLM and the fighters for environmental justice and immigrant rights to cool out and act “responsibly,” but we expect that these movements will remain in the streets, especially in the face of police and right-wing racist violence that won’t be going away.

Third is the great unknown — how might a Biden administration, despite its neoliberal politics and conservative instincts, be compelled to respond to the objective emergencies of the economy, the pandemic and political and racial polarization? If for example the reactionary Supreme Court majority overturns the Affordable Care Act, would Biden have the guts to declare a national health emergency and take the necessary measures?

The situation we face demands, to begin with, massive economic stimulus and relief, protection from evictions, and very serious health infrastructure reform, if only to head off a threat of descent into chaos. Could the force of circumstance compel a Democratic administration to abandon its stagnant neoliberalism and move toward something like a New Deal?

The odds of that, and the possibility of it becoming some version of a Green New Deal, are even less easily predictable than what might unfold in the days and weeks following the November 3 election. In the face of the sheer enormity of the crisis, popular mobilization can make a difference.