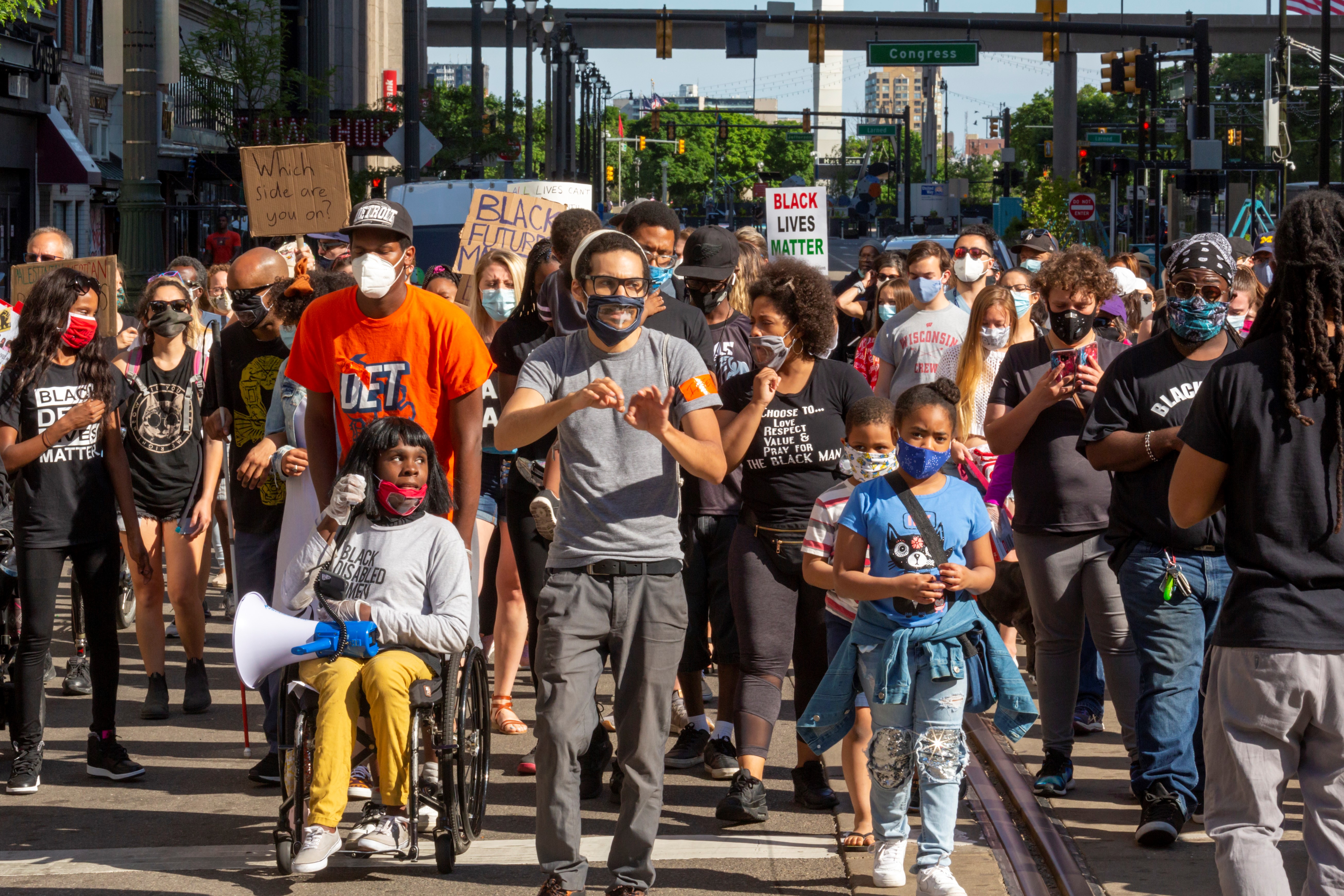 THE DECISION OF a Kentucky grand jury, a secret body, not to file murder charges against the two white cops who killed Breonna Taylor in Louisville shows that the United States criminal legal system is unjust and needs to be abolished and replaced.

The case of Breonna Taylor, an essential Emergency Medical Technician (EMT) during the current pandemic, shows this. She was a heroic figure. It did not matter to the police, or the criminal legal system as now constructed.

Breonna Taylor’s boyfriend Kenneth Walker had fired a single warning shot at the intruders, and the cops killed Taylor with massive gunfire.

There are two de facto criminal legal systems in the United States — one for African Americans and people of color, the other for whites.

While Black and white liberals, in office and out, focus on voting for Joe Biden on November 3, Black Lives Matter activists and leaders are mapping out a long-range plan to defend Black lives, defeat systemic racism and press for a new police and legal system.

The stakes in this battle are high. The corruption and unreformable criminal legal system extends to other parts of bourgeois democracy, including the Supreme Court — nine unelected lifetime appointments — a court that for most of its history has been a conservative wall to prevent fundamental changes.

It ruled in favor of slaveholders and slavery (the Dred Scott case), Jim Crow segregation (Plessy v. Ferguson, 1896) and against equality for Blacks and other oppressed peoples, approved the internment of Japanese Americans (World War II) and held back women’s equality and gay rights. Only in recent decades, sometimes, the courts have registered gains won in the streets.

Keeanga-Yahamtta Taylor, assistant professor of African American Studies at Princeton University, writing in the September 26 The New Yorker in her article, “The Case for Ending the Supreme Court as We Know It,” explained:

“The insistence that the Supreme Court is not a political body is a principle of high folly in American politics…. Moreover, as the branch of government that is least accountable to the American public, the Supreme Court has tended, for most of its history, toward a fundamental conservatism, siding with tradition over more expansive visions of human rights. Indeed, at the most significant moments in African American history, the Court reflected the most reactionary elements of the culture in its efforts to abridge, degrade, or simply eliminate the rights of African-Americans.”

The Senate also is an unrepresentative body where a state like Wyoming with less than 600,000 people gets the same number of Senators as California with 40 million.

Both these institutions need to be abolished and replaced by bodies directly accountable to the people.

The issue of “violence” in the context of injustice reflects the racial and class issues in the criminal system.

It is crucial to understand where violence originates and reject the false equivalency argument that biased media, many liberals and most conservatives say. In fact, all violence is not the same.

Peaceful protesters are attacked by military style police forces and Federal government police as seen in Portland, Oregon. Whatever response to police violence by those attacked is self-defense. That’s what the right and Trump falsely call “radical left” violence.

Another violence is committed by right wing white vigilantes who infiltrate peaceful demonstrations, as occurred in Minneapolis as the George Floyd protests began.

Black-clad or armed vigilantes as seen in Kenosha, Wisconsin are “friends” of the police. They are not targeted by the cops. Their violence is blamed on protesters who are labelled “anarchists” and “terrorists” (or antifascists) and the leaders of the Black Lives Matter movement.

There are police agent provocateurs violence who initiate anti-Black terror.

The BLM movement is decentralized, with local organizations and leaders. The web site M4BL.org lays out general positions and principles. There is no call for violence. It is Trump and his cohorts who invoke violence in the name of “law and order” by the state and its extralegal supporters, including the Proud Boys in Oregon.

Violence against property is not supported by the movement. However, the media disproportionately target these activities in its coverage to smear the demonstrators.

The BLM seeks to isolate those who commit violence. Traditionally in mass demonstrations, organizers use volunteer marshals to help protect the marchers from the cops if possible.

The role of the “progressive prosecutor” is debated among Black activists and liberals. Like some liberal Democratic mayors who try to accommodate the demands of Black Lives protesters and some reform of the system, liberal prosecutors seek to make the system a little less unjust for Blacks and working-class people without undermining the police and criminal legal system.

While the “progressive” label was rarely used at the time she was elected as District Attorney of San Francisco (2004) and Attorney General of California (2011), Kamala Harris, the Democratic Party vice presential nominee, was seen as a liberal prosecutor.

Yet she did little to resolve the issue of police racism and brutality in San Francisco. She supported more resources to the police department as other social programs were reduced. Harris once said, “I’ll be first to raise up my hand” to do so.

As state Attorney General she repeatedly sided with prosecutors accused of misconduct, challenging judges who ruled against them.

It is a contradiction to be called “progressive” as a criminal prosecutor who is aligned with the police. It is why Harris was seen by most San Francisco liberals and leftists as not pushing back on the cops and a corrupt criminal legal system.

Kamala Harris thought she could change the legal system from within. It did not happen. Modest changes, yes, but those didn’t stop killing of Black and Brown people by cops.

There are a few liberal prosecutors in other cities — San Francisco, Philadelphia and Portland. They support bail reform and other issues, but not radical restructuring of the criminal legal system.

In Portland, Oregon, the new “progressive” district attorney, came into office in the midst of daily Black Lives Matter protests. He came out for modest reforms that angered the police and Trump. But he did not call for a radical change to the legal system.

An article in the September 16 The Intercept shows both the significance and limitation of those jobs of prosecutors:

“When Mike Schmidt took office as Multnomah County’s new prosecutor, Portland was two months into a wave of protests that continues to this day. Schmidt, a progressive who won a landslide victory in the county that includes Portland, Oregon, was scheduled to take office next January, but his predecessor announced early retirement days into the protests. By the time Schmidt took over, some 550 people, including journalists, legal observers, and many peaceful protesters, had been arrested during nightly standoffs with police — the vast majority over low-level, nonviolent charges.”

Schmidt declined to prosecute protesters over the majority of misdemeanor charges, including criminal trespass, disorderly conduct, and interference with a police officer, or felony riot. “Instead, the office would focus on more serious protest-related crimes, like property damage, theft, and the use or threat of force.”

While an improvement from what most prosecutors do against protesters, this didn’t weaken or rein in the police. Focusing on reforms of a system that must be abolished and re-created in a new way cannot succeed.

New System Must Be Created

The focus must be mass protests to hold the states and federal governments and the criminal legal system accountable.

To give Breonna Taylor and other victims of murderous police and state-sanctioned violence a chance for justice, the cops responsible must be fired, prosecuted and removed permanently. It requires abolishing and replacing the current legal system period.

A new legal system must be created from the ground up. The old system, including its criminal procedures, must go. So-called police “unions” must be limited in their powers to undermine oversight. Police “qualified immunity” must be eliminated.

It will require a revolutionary struggle to bring this change. But anything less will lead to more Breonna Taylor killings and freedom for killer cops.

Most liberals reject these solutions. In fact, they believe there are only a few bad cops, bad prosecutors and a system that’s fine but needs some tinkering. They support Public Defenders for the poor, but little pressure is mounted to fund them.

Leaders of the BLM demand much more.

In a deepening crisis, Donald Trump repeatedly says the November 3 presidential election will be rigged and a scam if he is not reelected. He says there will be no transition of power, only a continuation of his rule. He has never had a majority of popular support.
In the first presidential debate on September 29, Trump told his white supremacist and armed militia supporters to “stand back and stand by” to act. He urged his supporters to go to polling places, with obvious intimidating intent.

Trump cites the Constitution where if there is no Electoral College victory by December 14 certification because of state conflicts, the decider is the House of Representative where each state delegation gets a single vote.

Republicans currently control 26 state legislatures and the Democrats 22, with two states tied. Trump also expects the Supreme Court to intervene, as it did in 2000, to keep him as president.

The ruling class must fear rebellion  — mass actions that could overthrow the current system and win radical reforms.

Malcolm X in a 1964 speech, “The Ballot or the Bullet,” explained why revolution (the bullet) is the answer to national oppression and to win full equality for Black people:”

“This government has failed us; the government itself has failed us, and the white liberals who have been posing as our friends have failed us. And once we see that all these other sources to which we’ve turned have failed, we stop turning to them and turn to ourselves. …

“America today finds herself in a unique situation. Historically, revolutions are bloody. Oh, yes, they are…but America is in a unique position. She’s the only country in history in a position actually to become involved in a blood-less revolution…All she’s got to do is give the black man in this country everything that’s due him. Everything.

The end of legal segregation and expansion of voting rights 50 years ago occurred after decades of Blacks fighting to be recognized as equal citizens. The right to vote came as mass marches demanded that the ruling party, the Democratic Party, act. Blacks being elected to office and other positions in business and academia happened because of that mass pressure.

Malcolm X was assassinated in 1965. A new Black middle class emerged in the 1970s. But the inequality for the vast majority of African Americans remains the same. The wealth gap between Black and white families has widened — from 10 percent of white wealth then to seven percent today.

The Black Lives Matter movement is a decentralized movement of local leaders and groups. It brings that vision together. It includes a multi-year year plan for “Black Power Rising” (see M4BL.org/black-power-rising/). Its focus is organizing on the ground while also supporting voting in elections. It stresses community organizing to gain influence and power.

The central lesson from seven months of mass protests is that the criminal legal system must be radically transformed from the bottom up.

The end of legal segregation and expansion of voting rights 50 years ago occurred after decades of Blacks fighting to be recognized as equal citizens.

Today “Black Power Rising” is a mass upsurge needed to roll back white supremacy and bring radical change. While many may think Black Power belonged to a bygone era, history in truth is repeating itself.

The white militias, the far right and Trump’s threatened use of the state to stay in power means that a clear revolutionary vision is needed to move the fight for Black lives to the next level.