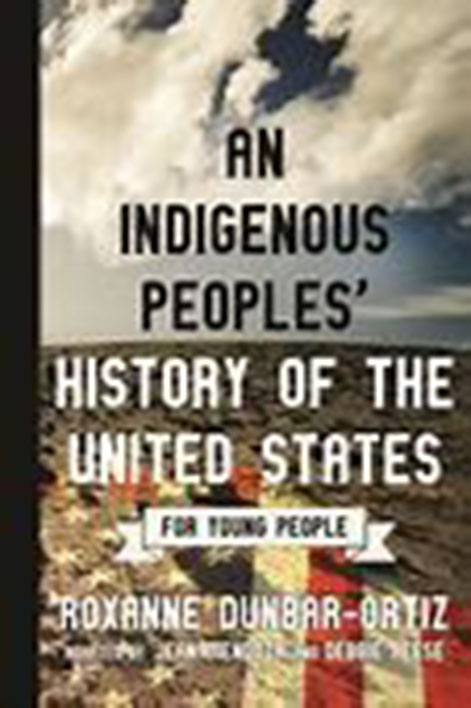 IN ROXANNE DUNBAR-ORTIZ’s wildly popular An Indigenous People’s History of the United States (Beacon Press, 2014), she builds a historical narrative that challenges the one commonly taught to U.S. students. The book sheds light on the major doctrines that shaped modern United States policy and how the architecture of oppression was built by white supremist values during its formative years. It particularly focuses on how modern Indigenous nations and communities are societies shaped by their resistance to colonialism.

This work, which has been adapted for young people, uses sidebars and exercises to ask the reader to reflect on conventional historical narratives. Dunbar-Ortiz’s exercises are not simply filler; they challenge the reader to rethink what they may have read in a traditional school textbook. One even gives the reader helpful strategies for interpreting the media.

The book begins with a brief overview of current U.S. history and an outline of how modern textbooks mask the country’s white supremacist roots. Dunbar-Ortiz then identifies some of the basic tenants of American settler colonialism:

“White supremacy. The idea that European American civilization is superior to those of the American Indians and of the Africans who were enslaved for economic gain” and “A policy of genocide and land theft.” (12)

This ominous start foreshadows the many painful incidents that would shape Indigenous resistance.

We are then given a snapshot of Native cultures through one of their most valued staples: corn. Dunbar-Ortiz challenges the traditional colonial settler narrative by illustrating that Native cultures were based on advanced agrarian practices and well developed systems of governance.

These innovations led to a population explosion and the creation of city-states toward the 1500s.*

During this time the Western Hemisphere had approximately one hundred million people, while the population of Europe was about seventy million. “Scientists attribute the significantly larger population in the Americas,” Dunbar-Ortiz notes, “to a relatively disease-free society whose use of herbal medicine, surgery, and ritual bathing kept disease at bay.” (19)

The author also describes the financial motivations of European colonizers and emphasizes how they imposed their religion.  When the colonizers first made contact with Indigenous peoples, they justified their actions by dehumanizing them and characterizing them as spiritually and biologically inferior.

Even when Natives reluctantly converted to Christianity, Europeans still deemed them lower: “This idea that bloodline is more important than wealth or social status laid the groundwork for what we call, today, white supremacy,” Dunbar-Ortiz comments. (37)

The arrival of these colonial settlers and their world view was at complete odds with the Native populations. The colonizers viewed everything they saw (land and resources) as theirs to own and exploit.

Previously people of England had used common land for their crops and livestock. However, during the Crusades era nobles took over those commons. Dunbar-Ortiz noted “Land went from being accessible to all to being private property where no one could go without permission from the owners.” (35) These brutal privatizations in turn created an entire class of people who were doomed to poverty and set the stage for colonial conquest.

The colonists’ strong desire to accumulate wealth at all costs and to do so by spreading religious dogma and therefore stamp out Indigenous cultures resulted in genocide.

Once the author defines the motivation and framework of the colonial settlers, she then analyzes some of the significant conflicts. The violent systems that the colonists created are described at some length:

“By the mid-1670s, scalp hunting had become part of an organized system through-out the colonies…. The settlers gave a name to the mutilated and bloody corpses they left in the wake of scalp hunts: redskins.” (67)

(Remember this next time someone normalizes the name of that football team!) This cycle of violence would repeat itself in battle after battle.

Land grabs and violence were amplified under Andrew Jackson. It is when describing the larger than life “heroes’’ like Jackson that this book shines. Dunbar-Ortiz argues that “there is danger in romanticizing any person, but especially ones who, like Thomas Jefferson and Andrew Jackson, acquired wealth and status by taking actions that directly or indirectly harmed others.” (109) The author makes it clear that both men were wealthy plantation owners who exploited enslaved laborers and developed one of the largest wealth-robbing genocidal systems ever seen.

Jefferson built the system by empowering settlers to continue to take Indigenous lands and crafting policies that normalized violence against them. Jackson contributed to this system with his militias and the U.S. military through brutal campaigns. One particular example was the subjugation of the Muscogee nation that resulted in a commission from President James Madison to become major general in the U.S. army.

Systemic ethnic cleansing went hand in hand with the passage of the Indian Removal Act of 1830. This enabled the government to create tracts of land west of the Mississippi. New treaties ceded Indigenous homelands to the United States in exchange for a new land base.

Following the Act’s passage, Washington made 86 treaties with 26 Indigenous nations located between New York and the Mississippi. These were signed under false pretenses or through intimidation. In the case of the Cherokees, when the leadership refused to sign they were jailed. They would then proceed to force any remaining council member to sign the treaty. The legacy of the Removal Act resulted in death marches in the middle of winter:

“Half of the sixteen thousand Cherokee men, women, and children who were rounded up and forced marched in the dead of winter perished on the journey.” (120)

These consolidated Native spaces set the stage for continued extermination as the land grab served to embolden the United States in its violent expansion west.

White supremacy also birthed the institutions meant to “reeducate” the Native populations. For instance, the Indian Civilization Act provided thousands of dollars for missionaries to “civilize” and “Christianize” Native children.

“These boarding schools,” Dunbar-Ortiz tells us, “were modeled on treatment of Native prisoners held at Fort Marion.” (159) Indigenous children were taken from their homes, sometimes with ther parent’s “consent,” sometimes by force. Schools were built far away from the children’s homelands in order to remove them from their cultural surroundings.

These violent, systemic actions illustrate that the United States, under the guise of diplomacy and law, ethnically cleansed and pillaged Native nations. They undermined Native nations’ abilities to self-determine, to organize, even to exist. They sought to strip a Native person of their identity from the minute they were born until they died.

As Dunbar-Ortiz puts it:

“The Termination and Relocation acts of the 1950s were part of the centuries-long efforts to dispose of indigenous peoples…The new termination policies attempted to deprive entire nations of their right to exist, and the Relocation act was an attempt to entice entire families to abandon their homelands and their communities.” (175)

Despite these continuous efforts to eradicate them, Dunbar-Ortiz reminds us that Native nations found ways to resist.

In Chapter 10, Dunbar-Ortiz focuses on key uprisings in Indigenous history from 1960 to 2013. One of the most notable incidents is the occupation of Alcatraz. This uprising was fed by the large Native population in the Bay Area (due to the relocation program) in 1964 and again in 1969. The idea was to reclaim Alcatraz, which served as a prison until 1963, because legal treaties stated that abandoned federal lands would revert to tribal ownership.

Although the first occupation was short lived, the second group garnered worldwide attention. The second wave, which occupied the island for as much as a year, included families. Groups organized and created demands for new institutions to serve Indigenous interests. This action radicalized a generation of indigenous youth.

It was under Nixon’s administration that some of the demands from Alcatraz were met, such as establishing a Native college (Deganawidah-Quetzalcoatl University) and a Native cultural center. However the reclaiming of the site was not granted.

The years after this important action led to a wave of successes in the courtroom, policies that acknowledged Native peoples’ rights to cultural preservation and tribal sovereignty.

• In 1975, the Indian Self-Determination and Education Assistance Act passed, which empowered Native communities to determine their needs and decide how to best use federal monies.

• In 1978, the Indian Child Welfare Act (ICWA) was passed. Before ICWA, there was little effort to keep Native children in their communities or with Native families.

• In 1990, after decades of pressure, Congress passed the Native American Graves Protection and Repatriation Act. Before this, cultural artifacts were stolen and hoarded in museums and private collections. Some even displayed their ancestors for tourists to gawk at! The Act required museums to return human remains and burial items. Indigenous communities held ceremonies and buried their ancestors.

• In 2013, Congress took a first step to address violence against Native women by implementing the Violence Against Women Act. Before this policy, tribes could not prosecute non-Native people who committed domestic or dating violence. (The Act was only for five years and has not yet been reauthorized.)

Dunbar-Ortiz concludes by highlighting scenes from the current struggle for Indigenous sovereignty and self-determination. The Dakota Access Pipeline (DAPL) illustrates the same reoccurring and systemic failures on the part of the U.S. government to honor treaties made with Native peoples.

Before construction on the DAPL project was to begin, the energy companies were required by the federal government to carry out environmental impact studies. These studies were to include consulting those affected by the pipeline’s construction.

Failure to perform these consultations has been used as the basis for legal action from Indigenous nations because consultations clearly showed that building this pipeline would result in a violation of the Fort Laramie Treaty and, more importantly, put their local water supply at risk.

Despite the objections of Native people, whose sovereignty was once again undermined, construction began. As these capitalist interests sought to extract resources, the Native population began a campaign that garnered worldwide attention.

“Many people around the world were shocked to see a September 3rd video of dogs attacking water protectors who tried to stand in front of machinery that was digging to lay more pipeline” (214).

The high visibility campaign against DAPL produced both wins and setbacks. During the Obama administration enough pressure was put on the president that his administration denied the pipeline company the easement it needed. However, the Trump administration reversed the order and authorized a go-ahead. As of March 2020, a federal court denied permits for the pipeline, the rationale being that the environmental impact statement left out vital worst case scenarios. The court ordered that a full environmental impact report be conducted. It remains to be seen what the outcome of this battle will ultimately be.

As more educational institutions become aware of the importance of Native Studies/Ethnic Studies, literature such as this book will grow in importance. An Indigenous People’s History of the United States for Young People is an excellent introduction that centers Native experience. Here in California the State Senate passed a bill that would require high school students to take a semester of an Ethnic Studies course starting in 2029. I can envision this book being the required text for a unit on Native history.

*The reader who wants to study in more depth about the groundbreaking innovations from indigenous peoples might want to read American Indian Contributions to the World or Daily Life of the Aztec on the Eve of the Spanish Conquest.