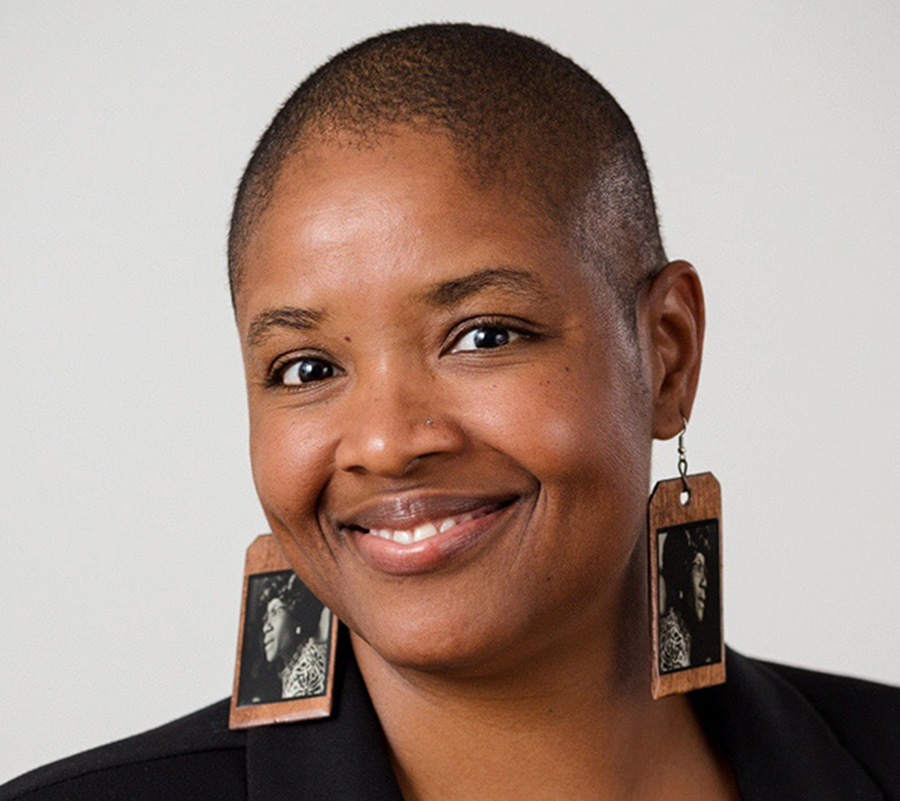 IN THE SPRING of 2020 I received the phone call from Howie Hawkins, who was seeking the Green Party nomination for president and had already received the Socialist Party’s nomination. While I was expecting only to be asked to support his candidacy, Howie asked me to be his running mate.

I thought of my grandkids, and I asked myself what kind of world they are inheriting and what can I do to change it. I was shocked by Howie’s request, but I knew I could not say no.

“I’ve known Angela since 2014,” said Hawkins, “She speaks with a clarity and conviction that people understand and believe. She was my first choice and I’m so glad she accepted,” Hawkins said.

Both the Green and Socialist parties are in a position to amplify the people’s power. If not now, when? We can deliver our message to millions of Americans, and I am honored to be running with Howie to bring about necessary change.

I was born and raised in Milwaukee, Wisconsin to a working-class Black family. Early in life, I quickly learned that cooperation, dignity and integrity were more important than financial wealth. Attending Bay View High School in Milwaukee, I and a group of Black students petitioned for and received an African American history class.

I graduated in 1992 and joined the Army Reserve in August. Following the birth of my daughter Epiphany, I began classes at the Milwaukee Area Technical College in 1993. We shortly relocated to Jacksonville, Florida, where I attended the University of North Florida.

In 2000, I was part of the mass mobilization in the demand for the recount of ballots in the recent election. I traveled to Tallahassee, Florida to protest widespread discrepancies with the ballots in the election. This was the beginning of my involvement in protests. I became a believer in the power of people coming together to stand up for their rights.

In need of extra income, I took a job driving a school bus, and left college in 2001 to drive full time. I loved being a bus driver. I engaged in peaceful actions against the war in Iraq in New York and Washington, DC when I was a driver for Greyhound Lines.

I returned to Milwaukee in 2009 and got a job with the county transit system. Two years later, Wisconsin’s new Governor Scott Walker began his assault on unions from the state capitol. As a member of the Amalgamated Transit Union Local 998, I joined thousands of union workers and our allies, as we occupied the Capitol in protest.

My actions led to my appointment as Legislative Director for Local 998, a capacity in which I served for two years. I helped organize efforts to inform transit riders about proposed cuts to service and transit access, and assist in securing the necessary funding for the transit system.

I fought for basic funding for the Milwaukee County Transit System and advocated for working families. Whether it was educators, healthcare workers, machinists, postal workers, or the Fight for 15, our union stood in solidarity. Our union was involved in the Occupy Wisconsin and Occupy the Hood movements.

In 2014 I was approached by Rick Kissell, a lifelong socialist and friend, to run as an independent socialist against conservative democrat David Clarke, the incumbent Sheriff of Milwaukee County. Our campaign discussed Milwaukee’s root causes of crime: poverty and systemic racism. We got the attention of the Left across the country, after receiving 20% of the vote as a socialist in an election for Sheriff.

I went to work for Wisconsin Jobs Now in 2015, as Community Campaigns Coordinator for the organization. I was part of the resistance to the privatization of public schools in Milwaukee.

In 2016, Emidio “Mimi” Soltysik of the Socialist Party asked me to be his running mate for Vice President of the United States. I accepted, and despite our limited ballot access on the continental United States, we garnered four percent of the vote in Guam’s preferential poll.

Needing to regroup and reconsider my relationship in activism and politics, I moved to South Carolina. At first, I worked as a substitute teacher at the secondary education level. However, in the summer of 2017 I returned to my work as a driver, this time driving a dump truck. I continue this job to this day.

I am a mother of one, and grandmother of five. I am a fierce advocate for the rights of Black, Brown and Indigenous people, the LGBTQIA community, Labor and the Earth itself. I found a home in the Hawkins/Walker campaign, a place that values the people I’ve dedicated my life to advocating for.