BY ALL POLITICAL leading indicators, Donald Trump is taking down the Republican Party to its most shattering electoral debacle in decades. “Presiding,” if that’s a word for anything Trump does, over the entirely preventable health and economic COVID-19 calamity, he’s proving himself willing to sacrifice anything for his own interests. 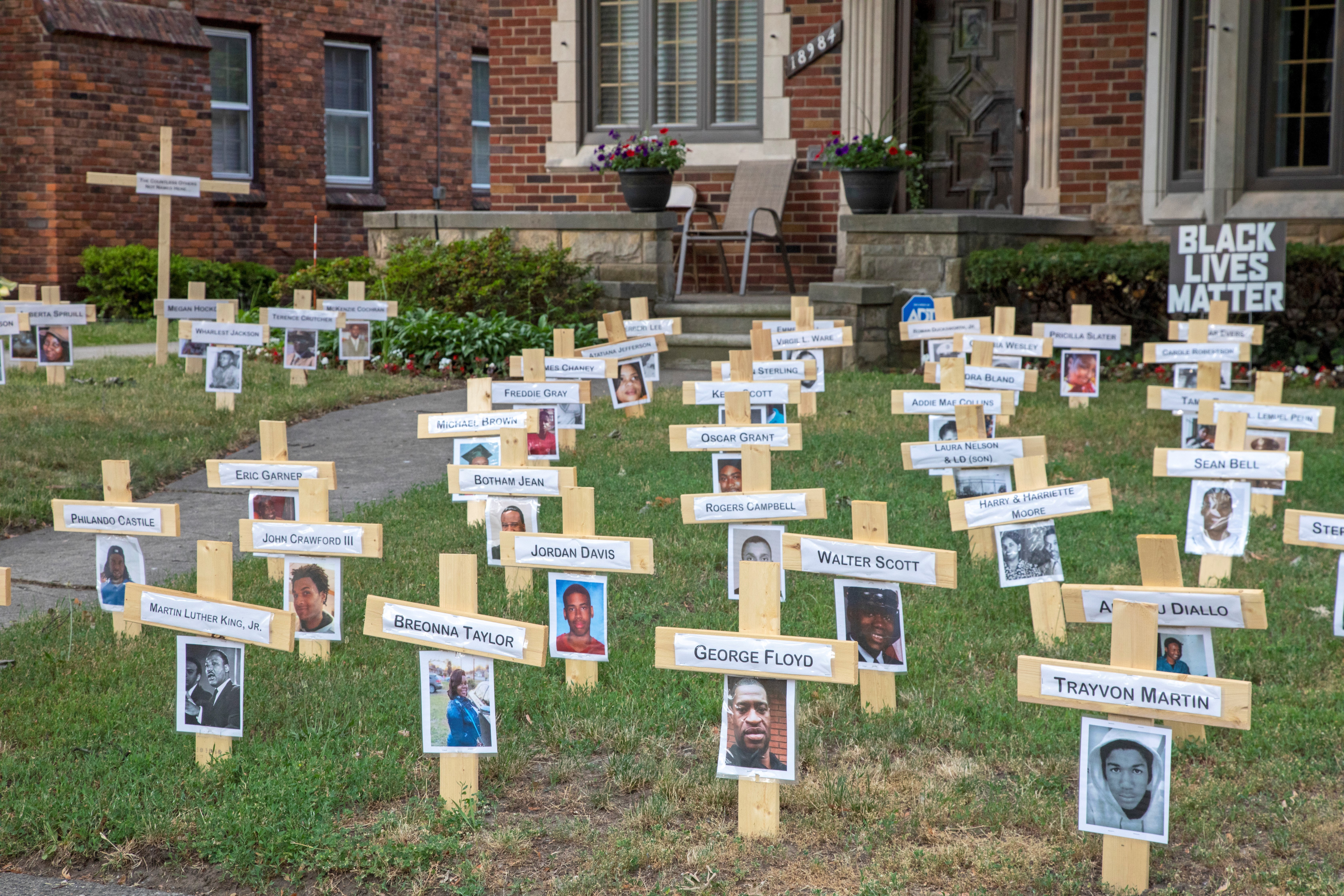 The Black Lives Matter Memorial in Detroit. John Thorn placed the crosses on the lawn of his home to represent the many African Americans who have died at the hands of police or in other violent incidents. Photo: Jim West

As Dr. Anthony Fauci warned of 100,000 new daily coronavirus infections by November, Trump’s dispatching federal marshals and border patrol thugs to face off against Black Lives Matter marches, was deliberately calculated to inflame chaos in American cities on the pretext of “restoring law and order.” When that didn’t work he turned to another chaos-inducing ploy, announcing that the November election is “rigged” by mail-in voting. In anything like normal political times, a poll-slumping president’s call to “postpone” a looming election would be an occasion for his party to save itself from oblivion by dumping him.

That same day, we learned that the Census Bureau was ordered to cut short household visits in order to deliberately undercount communities of color. This happened immediately after the White House instructed hospitals to report COVID statistics to Health and Human Services instead of the Centers for Disease Control — where the HHS bureaucracy can bury and falsify them. Mercifully, after Trump’s super-spreader campaign rallies from Tulsa, to Phoenix, to the Black Hills of South Dakota left more virus outbreaks in their wake, the GOP convention in Jacksonville, the Florida epicenter of the pandemic, finally had to be cancelled.

This administration — tragicomic in its incompetence, vicious and sadistic in its treatment of immigrants and asylum seekers, grasping dangerously although ineptly for authoritarian presidentialist rule — presents the most repellent picture to an increasingly desperate domestic population and a disbelieving world.

At present, the likely margin of Trump’s defeat looks to be too great to allow the election to be stolen either by rightwing voter suppression or, as several widely circulated articles have warned, post-election manipulation by Republican-controlled state legislatures. In the present climate, however, no outcome can be taken as certain. Polls have been wrong before; voter intimidation and suppression are escalating; dirty tricks close to the election are inevitable; and we know too well that the anachronistic Electoral College can produce fluky and disastrous results.

At the outer improbable extreme, a Trump/GOP Grand Theft Election could create not just a contested outcome but an existential crisis for the constitutional system that has served U.S. ruling elites so well through more than two centuries. That’s another whole scenario. But here’s what we know for sure: Following the November vote, the United States will remain a country bitterly polarized — between insurgent anti-racist and social justice movements, and vicious reaction spearheaded by white nationalism.

The United States will still face a coronavirus calamity and severe economic shocks, neither of which are ending soon — with tens of millions of people facing eviction, long-term unemployment, loss of health care, the destruction of public education and whole communities, with the prospect of mass misery on a scale not seen since the 1930s Great Depression.

The unfolding climate catastrophe, and a global pandemic with huge loss of life in the global South, are layered on top of numerous looming international conflicts, particularly the U.S.-China confrontation. The cancer of rising authoritarian regimes is spreading.  And we know that win or lose, some 40%+ of the U.S. electorate will cast its votes for the candidate, and what has become the Trump party, of open white supremacy.

Is this really new? No, and yes. Certainly we’ve seen blatant racial presidential campaign appeals before —  Richard Nixon’s 1968 Southern strategy, Ronald Reagan’s 1980 “welfare queens,” George H.W. Bush’s 1988 Willie Horton ad, and plenty other repulsive spectacles. Yet not in living memory has a sitting president actively embraced the Confederate flag, the symbol of human slavery in America — not since Woodrow Wilson proudly screened “Birth of a Nation” in the White House.

The Trump reelection campaign is reduced to its essentials: open promotion of white racism, pandering to corporate greed, and Trump’s incomprehensible denial of the scale of the COVID-19 nightmare that exposes even his own support base to the risk of mass death. With the economy cratering, he has nothing else left to run on.

What’s New, and Not

There is indeed something new here — both in the magnificent rise of the Black-led, multiracial insurgency against murderous police brutality and the systemic racism and obscene social inequality at the roots of this society, and in the virulence of the entrenched opposition. The tectonic conflict of these forces will define the coming decade.

If the gulf on social issues between the two U.S. capitalist parties has grown to historic levels, what’s not new in any fundamental sense is the Democratic Party. Much attention focuses on the growth of a “progressive” and sometimes oppositional wing of the party, which has energized the voting base. But the levers of policy-making and power remain firmly in the hands of the Pelosi-Schumer leadership, which answers to the party’s corporate donors.

The Democratic candidate Joe Biden offers a hardly inspiring option — continuation of the stagnant neoliberalism of the Clinton, and with some variations the Obama, administrations. Despite its verbal gestures toward the progressive wing and (much more) toward the movements in the streets, the Biden campaign is a consistent message of No: No to Medicare for All, No to the Green New Deal, No to defunding and demilitarizing police. Yes to platitudes, no to meaningful concrete change.

Some of Biden’s announcements, on the environment for example, look half-decent on paper, and so does the Democratic platform — that meaningless document, influenced as usual by the liberal and progressive wing. What counts aren’t words, but what a president and potential governing party will be prepared to seriously fight for. Remember for example how president Obama in 2009 put forward a “public option” for health care but withdrew it without a struggle. As for Biden, behind shopworn phrases about “healing America“ that mean nothing substantive, his honest campaign theme might be: I’ll fight for nothing, and that’s what I’ll deliver.

It should hardly be necessary to detail the fact that nothing in Biden’s political record deserves progressive, let alone socialist, support. His Senate career runs from presiding over the Senate character assassination of Anita Hill in the Clarence Thomas Supreme Court confirmation hearings, to enthusiastic advocacy of “tough on crime” legislation leading to mass incarceration in America, to supporting the disastrous and criminal Iraq war, from “ending welfare as we know it” to sweetheart sponsorship of the interests of the credit card industry headquartered in Delaware.

All this establishes Biden’s credentials as a 100% corporate Democrat. Like the Clintons, Biden has performed the formidable political trick of winning the support of blue-collar working class and especially Black voters, while spearheading the awful neoliberal programs that have brought pain and destruction to so many in those communities. Those very policies ultimately brought us the Donald Trump presidency, from whose disintegration Biden now stands to benefit.

Dozens if not hundreds of Trump executive orders need to be immediately cancelled — the Muslim travel ban, mass immigrant detention and family separation, massive assaults on the environment and women’s rights. It’s entirely unclear whether Biden would repeal these peremptorily, or even if he’s been asked about them. Beyond that, it should be clear by now that facing the economic carnage caused by COVID-19 requires a massive economic stimulus, to bail out people not banks and corporations — by some estimates amounting to 40% of the annual U.S. GDP (as estimated for example by leftwing economist Jack Rasmus).

That’s vastly beyond the inadequate post-2008 program of the Obama administration. Nothing suggests that Biden is interested in fighting for anything on that scale, without which the likelihood of a prolonged and deep Depression looms.

The horrific implications of a second Trump term can’t be overstated, however unlikely it may presently appear. An irresistible imperative — the removal of Trump and the white-supremacist Republican administration, by the largest possible vote — confronts an immovable object, the corporate neoliberalism of the real Democratic Party led by Pelosi, Schumer, Biden, the Clintons, and, yes, Obama.

We don’t think that many folks on the left have illusions that Joe Biden himself represents anything positive beyond being not-Trump. There are, and will be, differing views about how much the Democratic progressive wing could influence his administration (more than verbally). In any case, the difficult choice facing serious progressive folks in this presidential election, we believe, needs to be posed this way: What electoral choice can both oust Trump and  advance the prospects for the movements that are challenging the brutal racial capitalism of this society and spearheading the struggles for social justice, for human rights, for labor, for a future without climate and environmental collapse?

The argument to “vote for the Democratic lesser evil to defeat the rightwing menace,” repeated on an endless feedback loop ever electoral cycle, has no attraction for us — but that doesn’t automatically tell us what’s appropriate this time.

There are two basic options (in addition to work on local races and ballot initiatives). One is summed up in the formula “Dump Trump, Fight Biden,” seeing a vote for Biden and Kamala Harris as an unavoidable necessity — at least in states where the outcome is not certain while the struggle against what he represents must also begin immediately.

This argument holds that the imperative to defeat Trump in 2020 outweighs whatever openings might exist for an independent progressive, third-party alternative — and that no such alternative is presently strong enough to be meaningful.

The alternative argument contends that precisely now,  the importance of supporting independent, anti-capitalist politics is paramount, and that in the 2020 election that option is embodied in the Green Party campaign of Howie Hawkins and Angela Walker, on an unabashed ecosocialist program. (See Howie Hawkins’ “Which Green New Deal?” and his statement on running for president published in ATC 203, November-December 2019.)

Throughout his campaign for the Green Party nomination, Hawkins has stressed not only its program but also the importance of building the party as a meaningful political force and voice of the movements. Due to restrictive and oppressive ballot access laws backed by both capitalist parties, the Green Party is on the ballot in between 27-32 states. [See Angela Walker’s statement in this issue.]

Hawkins has stated that “for the Greens, every state is a battleground,” and we have no doubt that the consciousness of many dedicated activists is a battleground as well. Among members of the socialist-feminist organization Solidarity that sponsors this magazine, opinion is divided — as we expect it is in other currents on the left. (While making no formal endorsement, Solidarity held a poll of the membership to establish the balance of views. See Solidarity Election Poll.)

In any case, we don’t see “sitting it out” as a viable option. Whatever choice any of our readers make, the crisis and the struggles ahead will last long past the nasty, brutish and long U.S. electoral slog. The changes we most desperately need will come, as they always do, through mass action from below. The mass movements have won the significant gains in recent years for LGBT rights, progress toward decent wages, and a modicum of protection, however fragile it remains, for immigrant youth.

Most dramatically, #Black Lives Matter has put racial justice, police violence and mass incarceration on the political agenda and in cultural expression, from street paintings to sports uniforms and even corporate promos. To be sure, all that’s both a signifier of changing consciousness and the system’s effort to safely contain it. What’s been achieved remains a very long way from the deep changes we need, but the discussion in society has changed, and the task is to sustain and accelerate it.