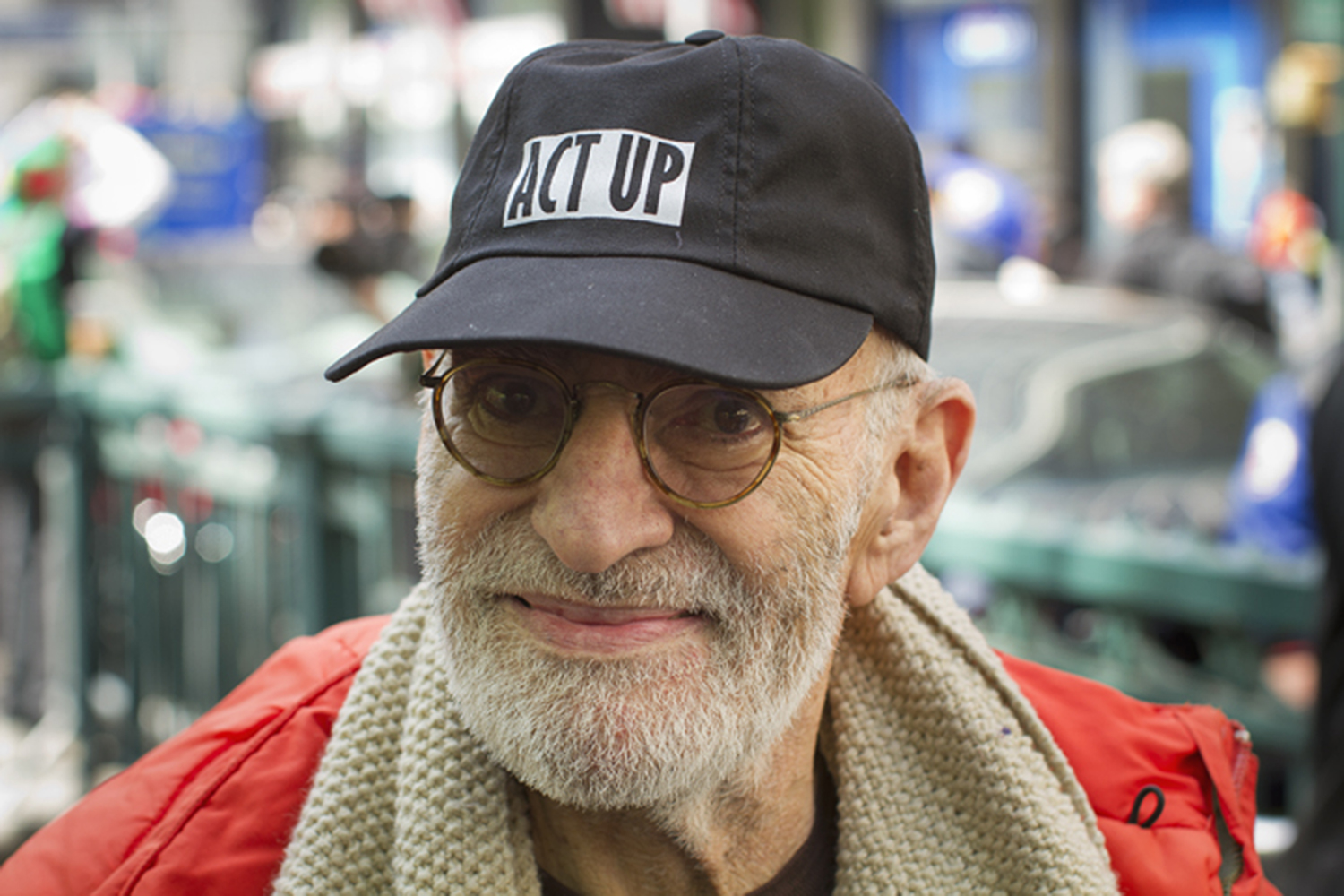 IN DYING ON May 27, 2020, Larry Kramer showed one last time his keen sense of timing. After many years when AIDS had rarely generated big headlines in the United States, there are now lively discussions of the lessons of the struggle against AIDS for the current struggle against COVID-19.(1)

As a key founder of Gay Men’s Health Crisis and, even more importantly, of the AIDS Coalition to Unleash Power (ACT UP), Kramer was an icon of the earlier battle. His death was and is an occasion to reflect on it.

Kramer’s obituaries often combined admiration with exasperation, unavoidably focusing on the man’s personality, which dovetailed with and left its mark on ACT UP’s militant style. In truth, he embraced and redeemed the stereotype, beloved of anti-gay bigots, of the loud, quarrelsome queen – joined in Kramer’s case to the stereotype of the loud, quarrelsome New York Jew.

Many gay men of Kramer’s generation, active in 1950s “homophile” groups like the Mattachine Society, had adopted personas that almost ostentatiously departed from that stereotype: they were discreet, quiet, calm, endlessly patient, slow to anger, virtually impervious to insult. Not Kramer.

This was, in a sense, surprising. From a middle-class family and a graduate of Yale, he could have squeezed himself into a mold of WASP reserve. Instead he became a champion of trumpeting inconvenient truths and picking fights that often needed to be picked.

Yet obituaries noted with wonder how people he picked fights with sometimes ended up as devoted friends. This was the case for example with Dr. Anthony Fauci, key in the 1980s in managing the federal bureaucracy’s response to AIDS, and even more prominent today as the sane face (alongside Trump’s lunatic visage) of the U.S. government’s response to COVID-19.

Kramer began by calling Fauci “a murderer and an incompetent idiot.” Today Fauci says, “We loved each other.”(2) He credits Kramer and ACT UP with teaching him an enormous amount about fighting epidemics, not from a lofty scientific and bureaucratic eminence, but in a way that enlists and joins with infected people themselves.

“I had to change,” Fauci says, “from a conventional bench scientist into a public-health activist who happened to work for the federal government.”(3)

Another unlikely sometime friend was Tony Kushner, like Kramer a gay playwright, unlike Kramer a stalwart defender of left-wing causes. Kushner was often frustrated at Kramer’s lack of a broad progressive vision. He thought Kramer “was relentless but not revolutionary.” But he credited Kramer with holding to “a terrible, galvanizing truth: Liberation from oppression is, in the most concrete sense, a matter of life and death.”(4)

What made both Fauci and Kushner (at times reluctant) fans of Kramer was the militancy that uniquely characterized ACT UP. At a time when the thousands of deaths from AIDS in the United States were widely and easily ignored, ACT UP shouted down the powerful, disrupted their press moments, and blocked the entrances to their headquarters.

The left in those days was caught in a routine of holding demonstrations that adopted radical rhetoric but were orderly and even boring. ACT UP was boundlessly creative, both in the bold, colorful images it plastered cities with and in the rowdy diversity of its actions.

As the unacknowledged godfather of a later generation of activism,(5) its example can still inspire people today who face the challenges of mobilizing against injustice while (at least sometimes, where possible) respecting distancing.

It began building anti-racist, anti-sexist, class-based alliances that prefigured a later generation of queer intersectionality. And it initiated a shift from gay male identity to queer fluidity. In these three respects, Kramer played a more problematic role, and makes a more unlikely icon.

Today, even among people too young to have personally experienced them, the 1970s are remembered as a lost golden age of gay sex: the bars, the baths, the discos, the tearooms, the piers along the Hudson and more.

ACT UP could not restore that lost time, but it resolutely refused to renounce it. Even before ACT UP came along, AIDS activists like Michael Callen had developed and disseminated safe sex practices that health officials were often initially too timid to even mention.(6)

Today, when many health departments routinely give non-moralistic advice about sex during COVID-19, it is hard to imagine how radical safe sex education was in the 1980s. This was after all a time when “homosexual propaganda” was illegal, not just in Russia but in Thatcher’s Britain and in many U.S. states.

This was not a cause that Larry Kramer particularly embraced. The famous 1983 article that made his name, “1,112 and Counting,” was not only an indictment of government inaction but also a complaint:

The article did not mention safe sex as an option. This was in keeping with the publication that at that point was Kramer’s main claim to fame in gay circles: the 1978 novel Faggots. The book was part of a genre that tried to square the circle by courting readers with prurient descriptions of emotionless male-male sex, yet ending with moralistic condemnations.

“I think the concealed meaning in Kramer’s emotionalism is the triumph of guilt: that gay men deserve to die for their promiscuity. In his novel Faggots, Kramer told us that sex is dirty and that we ought not to be doing what we’re doing…. Read anything by Kramer closely. I think you’ll find that the subtext is always: the wages of gay sin are death.”(8)

This was not a message for which Kramer found much an audience in ACT UP. Yet he never entirely gave it up. In a 2004 speech, he said, “Does it occur to you that we brought this plague of AIDS upon ourselves?… And you are still doing it. You are still murdering each other.”(9)

What lives on from ACT UP today, and rightly, is not this spirit of blaming the victims, but Michael Callen and Robert Chesley’s insistence on a sex-positive response to the epidemic.

ACT UP began as a group of overwhelmingly gay white men. Yet it emerged at a time when national lesbian/gay organizing, like the first lesbian/gay march on Washington in 1979, was strenuously trying to address issues of racism and sexism and represent the full range of the community, although it did not yet explicitly include trans or intersex people and was just beginning to include bisexuals.

ACT UP adopted that spirit early on. A group of experienced, left-oriented lesbians played a disproportionately important role from the start. Caucuses of people of color quickly formed and won space, time and representation.

Within a few years ACT UP had broadened its demands around AIDS to try to mobilize allies for a radical, transformational agenda. Reaching out to the union movement and the National Organization for Women, for instance, it tried to join forces in a national coalition for universal health care.

Unfortunately, even while ACT UP gained strength, other social movements were going on the defensive and retreating as neoliberalism prevailed under Ronald Reagan, George H.W. Bush and Bill Clinton. But as the documentary United in Anger shows, a leading group in ACT UP fought hard for transformational politics, even as others, becoming impressive self-taught experts, began pursuing careers in the nascent world of AIDS NGOs.(10)

By the mid-1990s, even as AIDS spread as a devastating pandemic over much of the world, the increasing efficacy of anti-retroviral drugs increased HIV-positive gay men’s odds of survival in the United States, which (along with so many deaths) cut into ACT UP’s base of support.

This facilitated the growing strength of a gay conservative wing, visible by the century’s end in the domination of the fourth national march by the Human Rights Campaign Fund and Fellowship of Metropolitan Community Churches.

Still, the radical vision developed in ACT UP remains as a legacy. In recent decades it has been stronger in movements in other countries, like South Africa’s Treatment Action Campaign.

“Larry … was an unapologetic tribalist. I often told him that I felt this amounted to a willed limitation of empathy, fatal to the necessity of building solidarity with other communities fighting for justice, enfranchisement, emancipation. He told me that I was too easily distracted and insufficiently loyal to ‘our people.’”(11)

Kramer’s “tribalism” cut him off from new developments in the 1990s, particularly the rise of Queer Nation groups and of queer theory. With contradictions and at varied tempos, the LGBTIQ left gradually moved away from the defense of any one clearly defined and sharply demarcated community, toward a greater appreciation of the diversity of different crosscutting sexual communities.

Awareness also grew of the importance of understanding how sexual identities interact with others: racial, ethnic, gender, disability-related and more.

In the explosion today of anti-racist mobilizations, the hashtag #BlackLivesMatter — championed from 2013 by a group of radical queer women of color — coexists openly with #BlackQueerLivesMatter and #BlackTransLivesMatter.

Here too the legacy that ACT UP eventually began to develop lives on — even if Larry Kramer might have trouble recognizing what has become of his crusade. Even as many statues are being knocked off their pedestals, we should not be too quick to consign Larry Kramer to the ignominy to which the likes of Andrew Jackson are rightly being consigned.

With thousands, even millions of people beginning to take action for the first time, mobilizations will inevitably be full of confused and contradictory ideas. Change is born of contradictions; built on contradictions. It would be a fatal error to limit movements to the ranks of the already woke — as if anyone ever is entirely woke.

In the fights being waged now, there should still be room for a scrappy ancestor who recognized, in Kushner’s words, the “terrible, galvanizing truth: Liberation from oppression is, in the most concrete sense, a matter of life and death.”