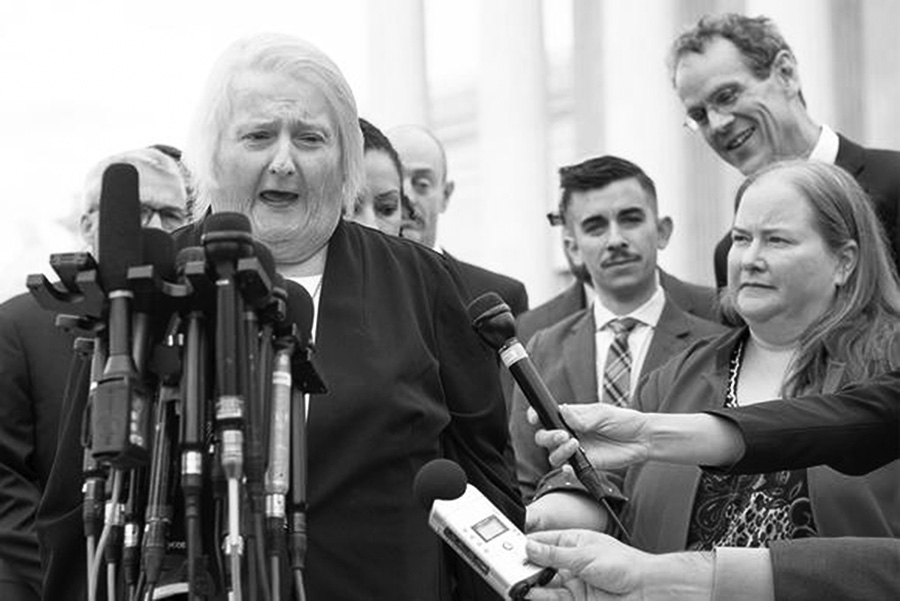 Aimee Stephens was a funeral director but fired when she transitioned. Although she won her case, she died before the decision was handed down.

The employment discrimination decision came five years after the Court’s ruling that denial of the right to marry to LGBT people was unconstitutional. Many queer people and their allies saw the 2020 decision as long overdue, since state and lower federal courts had made similar decisions decades ago.

In fact, the battle for LGBT inclusion was won through protracted struggle on the ground over the last several decades. The strength and courage of queer people in winning mainstream public support for our rights lit the way for the courts to follow. The self-organization and militance of previously marginalized people made all the difference.

When David Cole of the ACLU was asked during oral arguments by Justice Gorsuch whether prohibiting employment discrimination against queer people would lead to a “massive social upheaval,” he pointed out that in effect, that social upheaval had already occurred. It happened because oppressed people organized and fought for their rights.

What’s Next on the Agenda?

As important as the court’s action was, much remains to be done before we see anything like a truly equal playing field for queer people. The June decision was limited to Title VII, which covers employment discrimination; it does not cover education, jury service, health care and housing, although cases relating to those areas may soon follow.

And in view of the relatively weak social support [the “social wage’’] provided by the U.S. federal, state and local governments, much more is needed for traditionally disadvantaged and excluded segments of the population, such as people of color, women, people with disabilities, etc.

The social disruption brought about by the COVID-19 pandemic is a case in point, for both LGBT people and others. Marginalized people are often the worst hit by social disasters, and this year’s outbreak is no exception.

People who are unemployed or only sporadically employed have less access to health insurance, and therefore, to health care. The pathological system of employer-based health insurance that predominates in the United States ensures that the most vulnerable will be the most poorly served.

And insurance isn’t the only obstacle. According to the National Center for Transgender Equality, 23% of trans people who needed a medical provider didn’t seek one because of concern about discrimination or disrespect. Another 33% decided to forgo treatment because they couldn’t afford it.

Just a week before the Supreme Court decision on LGBT employment rights, the Trump administration finalized a regulation that removed protection for transgender people against sex discrimination in health care. While this action seems to fly in the face of the Supreme Court’s reasoning, it will still have to be undone.

Marginalized people, both LGBT and straight, are being pushed into the underground economy. Sex workers, both trans and non-trans, face grave danger from contagion, and those who are incarcerated are often put in shared cells that don’t respect their gender identity. Precarious living arrangements increase the danger of domestic violence, from families as well as partners.

Meanwhile, right-wing anti-LGBT politicians, who tried over the last few years to pass state laws preventing trans people from using public restrooms, only to see their most prominent efforts fail, have shifted their focus to preventing young trans people from obtaining life-affirming and sustaining treatment that could give them a much better start in life. At least nine such bills have been introduced or are planned this year.

LGBT people and their allies need to remain vigilant and mobilized to resist and overcome both anti-trans prejudice and the more pervasive inequality that dominates our society.