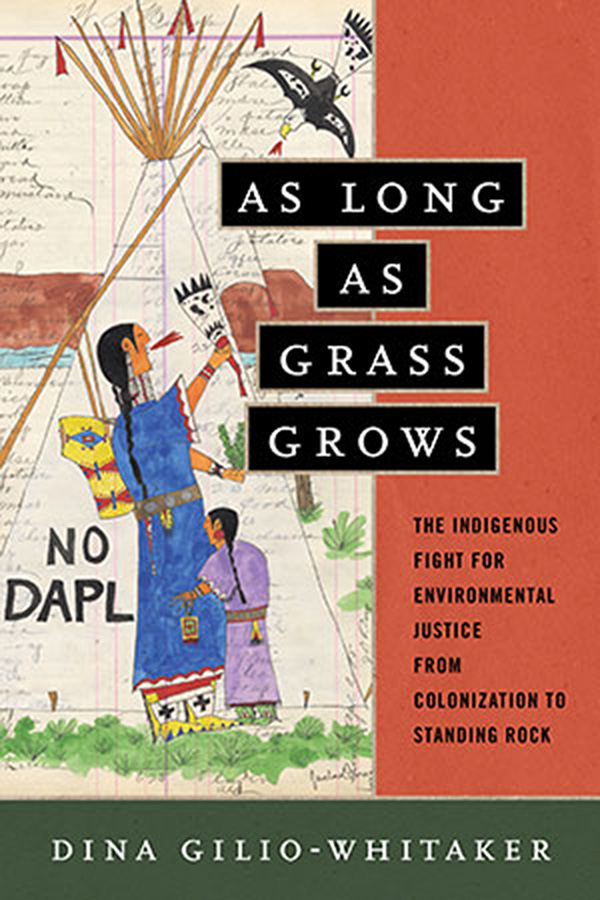 As Long as Grass Grows:
The Indigenous Struggle for Environmental Justice,
from Colonization to Standing Rock
By Dina Gilio-Whitaker
Beacon Press, 2019, 222 pages.

Mt. Rushmore is in the Black Hills known as He Sapa to the Oceti Sakowin, the seven council fires or Lakota, Dakota and Nakota (the Sioux), which is sacred to the Oceti Sakowin. He Sapa was stolen by the United States and in 1980 the Supreme Court confirmed that they were stolen.(2)

The Oceti Sakowin have refused the money, instead demanding the land back. Outside the Trump event, Indigenous activists blocked the road and many were arrested.(3) Trump’s speech was vile; to Indigenous people, however, a nationalistic and racist speech on stolen land is nothing new.

On the flip side, a court decided that the Dakota Access Pipeline must be stalled and all oil removed following the 2016 standoff at Standing Rock led by the Hunkpapa Lakota.

The resistance in 2016 successfully stopped the pipeline for a limited amount of time until Trump reignited the process.(4)

The decision comes on the heels of a nationwide uprising against systemic racism following the murder of George Floyd, forcing many Americans to reflect on the racist past and present of United States.

The movement has also included the toppling of statues of racists and colonizers including Confederate Generals and Christopher Columbus. Many have even started to question union generals who fought Indigenous people during and after the Civil War — including President Lincoln, who ordered the largest mass execution in U.S. history with 38 Dakota men hanged in 1862 following an uprising against settlers in what is known as Minnesota today.(5)

The movement has also forced the notorious Washington football team to change its racist name, following decades of pressure against Indigenous mascots.(6) Finally, the Supreme Court ruled that half of Oklahoma is still “Indian Country” in a legal sense, marking an important victory for Tribal Sovereignty.(7)

Idle No More, the struggle against the Keystone XL pipeline, and the struggle at Standing Rock mark only the most recent wave of mass Indigenous action. Indigenous resistance has happened for centuries. This time, more non-Indigenous people are pulling back the curtains to see the brutality of the American state.

In this context, there has been a renaissance of Indigenous writers who are gaining mass appeal. The U.S. left has had a history of overlooking or downplaying the role of settler colonialism while not seeing Indigenous liberation as a central fight for a future revolution on Turtle Island (North America).

These writers are forcing people to radicalize and grapple with its history and ongoing process. These writers include some of the authors of the books reviewed here. They include As Long as Grass Grows by Dina Gilio-Whitaker (Colville Confederated Tribes), Standing with Standing Rock edited by Nick Estes (Lower Brule Sioux Tribe) and Jaskiran Dhillon and Speaking of Indigenous Politics edited by J. Kéhaulani Kauanui (Kanaka Maoli [Native Hawaiian]). All three are valuable resources for the movement to take a closer look at settler colonialism today.

Gilio-Whitaker is a lecturer of Amer­ican Indian studies at California State Uni­versity, San Marcos and also co-author of the book All the Real Indians Died Off with Roxanne Dunbar-Ortiz. Her title is a reference to language that was often in treaties between the U.S. government and Indigenous nations promising them land “as long as grass grows.”

She is the first author to do a comprehensive look at the role of settler colonialism and the resistance connected to the environmental justice movement.

Covering a wide range of material from the removal policy to environmental justice theory to the Indigenous perspective of land as medicine, this book is must-read for every activist interested in fighting for a habitable planet and centering Indigenous liberation and the struggle against settler colonialism in that effort.

The subtitle, “The Indigenous Fight for Environmental Justice, from Colonization to Standing Rock,” is a clear recognition that the mobilization we saw at Standing Rock is connected to a long tradition of struggle for environmental justice. The book is situated with the framework of settler colonialism (and capitalism) and the ideology of white supremacy being a system that is destroying our planet.

The author’s introduction lays out her argument looking at the principles of nationhood and self-determination which are tools Indigenous people have always used to “defend and remain on their land and the life those lands give them.” She continues:

“From the intrusions of the earliest colonists into Native gardens, to the havoc wreaked by railroads and the imposition of reservations boundaries, to today’s pipeline and fracking conflicts, Indigenous peoples have been forced into never-ending battles of resistance.”(8)

She goes on to say that “the implicit question this book asks is what does environmental justice look like when Indigenous peoples are at the center?” This has been the key question for the movement, and many non-Indigenous people are starting to understand that treaty rights are a way to stop some of these fossil fuel companies.

The slogan at Standing Rock was “Mni Wiconi,” which is the Lakota word for “Water is Life,” recognizing that we all need water to live.

Today we have started to see a multi-racial fightback against pipelines, such as the Black Hills Alliance in the 1980s, Cowboy-Indian Alliance against Keystone XL and the struggle at Standing Rock.(9)

All brought non-Indigenous and Indige­nous people together, while centering the Indigenous struggle. The history that Gilio-Whitaker examines is key to understanding how the current environmental movement is becoming more and more diverse with people of color, specifically Indigenous people, leading the way.

Chief Phil Lane, who is Dakota and Chicksaw, reflected on some of the recent outrage of settler ranchers’ land being taken for pipeline construction. Gilio-Whitaker quotes Lane at length on a meeting between Natives and non-native farmers.

“Those ranchers came in and spoke to that council, and they shared their heart…. So finally we came back after the treaty signing…we had about ten or fifteen ranchers there, they all got up to speak…and one after another they got up and said they’re infuriated. ‘They said…How could this happen? How can people take our land? How can they do this to us?’ And of course…we didn’t see a smile but everybody knew what we was thinking about from our side…. So finally this last sister got up to speak and she just said, ‘I just am so infuriated, they’re coming and taking our land…they just can’t do it without our consent…. This is our land that our families have lived in since…you know, how long they have been there.’ And said, ‘They’re treating us just like…just like…,’ and then one of the relatives said, ‘Just like the Indians.’ And all of the [sic] sudden there was this beautiful pause and every’s like, ‘Yes!’ And one of my relatives walked over to her and says, ‘Welcome to the tribe, welcome to the tribe.’”(10)

Nick Estes, assistant professor of American Studies at the University of New Mexico and co-founder of The Red Nation,(11) wrote his debut book, Our History is the Future in 2019.(12) The book has been an important guide for so many on the left who have started to deconstruct their ideas on settler colonialism.

In the spirit of celebrating what might be a temporary victory stopping the Dakota Access Pipeline, Estes has followed up Our History is the Future with Standing with Standing Rock, co-edited with Jaskiran Dhillon, associate professor of global studies and anthropology at The New School. The book brings to life the voices of those who stood up at Standing Rock and enables the reader to experience the beauty, brutality and vision of a different future.

The book features over 30 authors ranging from well-known Kim TallBear and Roxanne Dunbar-Ortiz to Standing Rock Sioux Tribal chairman David Archambault, II to journalists and activists on the ground. It is organized in six sections ranging from the resistance to political landscape to environmental colonization, centering the struggle for the environment as an anti-colonial struggle.

This book will help you think through the movement and get you started down a path of digging deeper into the struggle against settler colonialism.

The Dakota Access Pipeline struggle may have gotten the most attention but Indigenous people have been fighting for centuries and their voices need to be amplified. J. Kéhaulani Kauanui edited the book Speaking of Indigenous Politics, a compilation of interviews based on the radio show called “From Native New England and Beyond.”(13)

Kauanui is a professor of American studies and anthropology at Wesleyan University.

The book features 27 interviews as the subtitle of the books says “with activists, scholars and tribal leaders.” Kaunanui picked these specific interviews from her radio show because of their important work in the movement against settler colonialism.

Like As Long as Grass Grows and Standing with Standing Rock, this is an excellent book for readers sick of the same old narratives of old white historians telling the story of Indigenous people. These are the voices of those fighting.

During this time of struggle against racism, white supremacy and colonialism we must engage with the United States’ brutal past. This country and capitalism came “dripping from head to toe, from every pore, with blood and dirt,” as Karl Marx put it.(14)

Settler colonialism is not just from the past but is an ongoing process in the United States. Many are starting to question this systematic oppression from the streets of Minneapolis to Albuquerque to Columbus, Ohio.

Books like As Long as Grass Grows, Stand­ing with Standing Rock and Speaking of Indigenous Politics provide a framework for readers to explore and learn as they are immersed in the movement.