“Do not get lost in a sea of despair. Be hopeful, be optimistic. Our struggle is not the struggle of a day, a week, a month, or a year, it is the struggle of a lifetime. Never, ever be afraid to make some noise and get in good trouble, necessary trouble.” — A tweet from June 2019 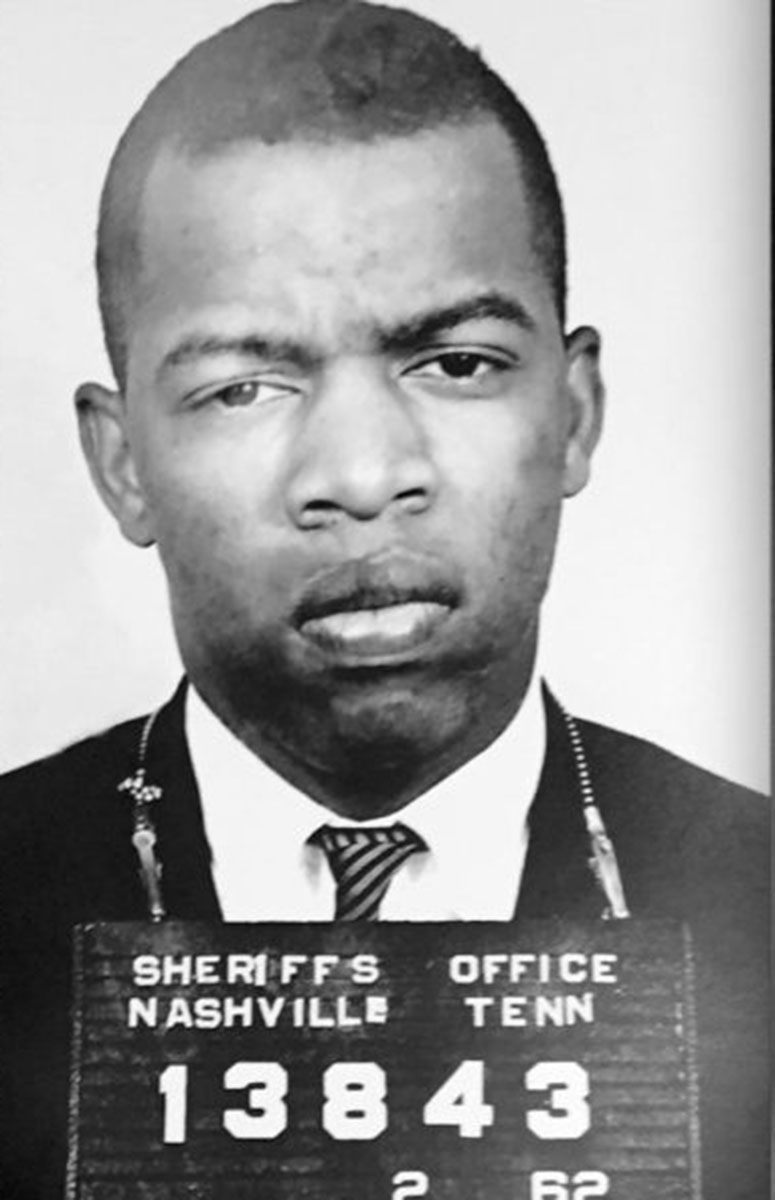 JOHN ROBERT LEWIS died July 17 in Atlanta, Georgia, at the age of 80. He was born on February 21, 1940, in the segregated town of Troy, Alabama. His parents were sharecroppers. He was the last living member of the civil rights leadership known as the “Big Six.”

In 1960, as a seminary student in Nashville, Lewis participated in the sit-ins to desegregate lunch counters. The following year he was one of 13 who joined the “Freedom Rides” to desegregate public transportation across the South.

Lewis was arrested 45 times in his life — some 40 times when battling Jim Crow segregation. He was beaten bloody by cops, state troopers and white supremacists.

Today’s Black Lives uprising leaders stand on the shoulders of the civil rights movement of the 1960s. Lewis’ life reflects the power of that revolutionary leadership and its inspiration to today’s new leaders.

Although Lewis became a part of the Democratic Party establishment as an elected member of Congress beginning in 1986, he lived for over 20 years as a community leader in the Jim Crow South — where whites saw African Americans as less than human.

In 1968 Lewis married Lillian Miles, a former Peace Corps volunteer to Nigeria and librarian. Until her death in 2012 she was his closest political advisor. In 1976 they adopted a son, John Miles-Lewis.

Lewis lived an extraordinary life. He fought legal segregation in the South in his youth and joined the Black Lives protests this year in the Capital. A living continuity of the two popular struggles, he knew racism when he saw it.

John Lewis refused to attend the inauguration of Donald Trump and criticized Trump as a racist president and white nationalist.

On Saturdays they practiced by going into the segregated areas of the downtown department stores, then coming back to class to evaluate their action. Lewis was one of the most disciplined Gandhians.

As the sit-ins spread, the Student Nonviolent Coordinating Committee (SNCC) was born. From its beginning in 1960, SNCC was seen by the leaders of the movement as the “shock troops of the revolution.”

Although the Southern Christian Leadership Conference (SCLC) seeded the meeting that spawned SNCC, it remained independent, partially on the advice of Ella Baker, SCLC’s executive director.

Lewis responded to an ad placed in SNCC’s The Student Voice for volunteers for “Freedom Ride, 1961,” to desegregate public transportation across the South. The freedom riders were assaulted by vigilantes; one of their buses burned and they endured an all-night siege, only leaving under a heavy martial escort.

Lewis joined the SNCC staff the following year and became its chair in 1963, the same year he spoke at the March on Washington. At 23 he was the youngest on the platform. He gave a militant speech demanding the government act now for freedom, yet it was weakened by the leadership’s desire to appease President Kennedy.

The night before the march, the speech was mistakenly leaked to the press, and as word of its contents began to spread, Lewis was summoned to a meeting with the march’s leaders and urged to tone down certain elements.

Lewis edited his harsh criticism of the Kennedy administration’s civil rights bill, which he’d originally called “too little and too late,” and changed his call for a march “through the heart of Dixie, the way Sherman did” to a march “with the spirit of love and with the spirit of dignity that we have shown here today.”

In his unedited speech, he said:

“I want to know, which side is the federal government on?

“The revolution is at hand, and we must free ourselves of the chains of political and economic slavery. The nonviolent revolution is saying, ‘We will not wait for the courts to act, for we have been waiting for hundreds of years. We will not wait for the President, the Justice Department, nor Congress, but we will take matters into our own hands and create a source of power, outside of any national structure, that could and would assure us a victory.’

“To those who have said, ‘Be patient and wait,’ we must say that ‘patience’ is a dirty and nasty word. We cannot be patient; we do not want to be free gradually. We want our freedom, and we want it now. We cannot depend on any political party, for both the Democrats and the Republicans have betrayed the basic principles of the Declaration of Independence.”

“All of us must get in the revolution. Get in and stay in the streets of every city, every village and every hamlet of this nation until true freedom comes, until the revolution is complete.

“In the Delta of Mississippi, in southwest Georgia, in Alabama, Harlem, Chicago, Detroit, Philadelphia and all over this nation, the black masses are on the march!

“We won’t stop now. All of the forces of Eastland, Bamett, Wallace and Thurmond [segregationist officials in the South] won’t stop this revolution.

“The time will come when we will not confine our marching to Washington. We will march through the South, through the heart of Dixie, the way Sherman did. We shall pursue our own scorched earth policy and burn Jim Crow to the ground — nonviolently.

“We shall fragment the South into a thousand pieces and put them back together in the image of democracy. We will make the action of the past few months look petty. And I say to you, WAKE UP AMERICA!”

The young revolutionary Lewis believed that Freedom Now could not wait for those who said take it slow.

The Democratic Party at the time was an alliance of Northern liberals and Southern white supremacist racists in the Jim Crow South. That unholy alliance gave John F. Kennedy the 1960 presidential election. The Southern Democrats were okay so long as the Democratic Party did not demand it allow Blacks the right to vote and other freedoms.

Student youth rejected that alliance. The traditional leaders, however, were conscious of support from white liberals.

SNCC leaders, including Lewis, represented the militant uncompromising wing of the movement and did not back down in its criticism of the Kennedy administration. Yet SNCC leaders so deeply resented the Black establishment’s restrictive rules and prescribed picket signs that they underestimated the impact of the march.

The same ambivalence occurred when Martin Luther King announced a voting rights campaign in Selma, Alabama in 1965. SNCC workers anticipated that this leadership-centered approach would undermine their attempt to develop local Black leadership.

Officially SNCC was uncommitted to the infamous March 7, 1965 “Bloody Sunday” march when some 600 demonstrators peacefully walked across Edmund Pettus Bridge, named after a Confederate general and former head of the Alabama Ku Klux Klan. SNCC workers, however, were free to participate as individuals and in fact John Lewis was one of the three march leaders.

As marchers were ordered back, the troops mounted a brutal assault. Lewis was knocked down, beaten and ended up in the hospital with a fractured skull. “I gave a little blood on that bridge,” he said years later. “I thought I was going to die. I thought I saw death.”

In response to the broad public outrage, the Democrats in Washington decided they had to act. Within weeks President Johnson pushed through the Voting Rights Act.

The Act’s significance was revolutionary. It restored rights that Blacks had gained after the ratification of the 13th Amendment that ended slavery (1865), the 14th Amendment that guaranteed civil rights (1868) and the 15th Amendment that outlawed the suppression of citizens’ right to vote on the basis of race, color or previous condition of servitude (1870).*

Those rights lasted 12 years, until the Union army left the South and white nationalists organized a counterrevolution. They used extralegal terror and the legal institutions to deny Blacks the positive steps they had made during the period of Radical Reconstruction.

In 1966 Lewis lost his chairmanship of SNCC to Stokely Carmichael, representing the left-wing of the organization, who demanded “Black Power.” Soon afterwards, Lewis resigned from the organization but remained on SCLC’s board.

Groups like the Black Panther Party later connected the fight for equality to the struggle of Black workers against their superexploitation by the employing class.

Legal Equality, but Not Enough

Interestingly enough, Lewis met the great revolutionary nationalist Malcolm X — the day before the 1963 march, and again in a trip to Africa in 1964 — and concluded that more than any other individual Malcolm had been able “to articulate the aspirations, bitterness, and frustrations of the Negro people.”

In another interview Lewis pointed out that while Blacks in the South were focused on the battle to overturn legal segregation and win basic rights, northern Blacks suffered from a different racism — de facto discrimination.

It took the civil rights revolution to win the main legal demands of the movement. Three historic laws — 1964 Civil Rights Act, 1965 Voting Rights Act and 1968 Housing Act — opened society to a new reality where African Americans could finally live anywhere in the country and even vote.

Those three laws ended the bond between southern Dixiecrats and the Democratic Party. President Nixon and the Republican Party embraced the white segregationists in the 1970s.

Overnight a majority of southern whites switched their allegiance from the Democratic Party to the Republican Party. The party of Lincoln that crushed the Confederacy became the party of racism.

Lewis and others who fought for legal equality in a nonviolent revolution shifted their focus to joining the institutions like the two-party system from which Blacks had been excluded.

King, on the other hand, decided to keep the movement for change in the streets arguing that formal legality meant little without economic power. He began organizing a Poor People’s Campaign and, against the advice of allies, began opposing the U.S. war in Vietnam.

While supporting a strike of sanitation workers in Memphis, King was assassinated on April 4, 1968.

Afterwards the divisions between the more moderate wing of the movement and militant nationalists hardened. Eventually the civil rights establishment shifted from the streets to winning hundreds of elected positions to city, state and even nationally.

It is not unusual that leading activists in a democratic revolutionary struggle become more moderate when the main legal demands are won, even though fundamental change to the economic system has not occurred.

The Black Nationalist and Black Power wing rejected the objective of integration into the capitalist system. They had been influenced by the ideas of Malcolm X and African independence leaders, and Cuban revolutionaries, particularly Fidel Castro and Che Guevara.

The BLM movement today, led by Blacks but multiracial in composition, is at the head of the democratic struggle to end policing and systemic racism. There is more understanding that to end policing (abolish, defund and redirect the money for social programs) requires mass struggle. It cannot wait for a new president in November.

Too often progress is made, then derailed, reversed, or overwhelmed by powerful reactionary forces. “Bloody Sunday” in Selma led directly to the passage of the Voting Rights Act –– yet suppressing the Black vote is a pillar of today’s Republican Party strategy.

The election of the first African Amer­ican President was followed by a bigot running for election, and now reelection, on a platform of racism and resentment.

John Lewis understood that gains won in the past had been eroded and could only be defended by more agitation and popular struggle. That is why democratic revolutionaries of today can salute his life, and his vision that being a good troublemaker and breaking immoral laws is the first step toward full equality.

Many also see that much more is needed to end systemic racism. This will require an anti-capitalist revolution.

*Indigenous people were excluded from the 14th Amendment and wmen from the 15th.