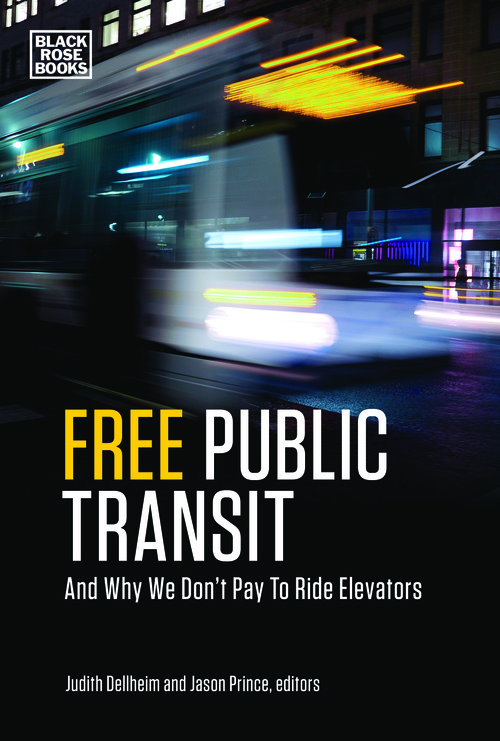 AMONG THE FEW positive aspects of the COVID-19 pandemic, some localities have taken the impressive step of implementing free transit. Several cities in Ohio, including Akron, Canton, Toledo and Youngstown announced free fares as of March 16. Towns in Vermont and Nevada have done so as well.

Unfortunately, local officials are quite clear that these are only temporary for health purposes and will be reversed once it is “safe.”

Over the last several decades, though, many cities around the world have experimented with free transit. Free Public Transit editors Judith Delheim and Jason Prince collect a dozen-and-half essays of these stories written by activists, academics and journalists involved in the issue.

Many cities have reduced or even given free fares for specific groups, generally the elderly or students. Delheim and Prince compile pieces on more political efforts.

The main part of the book consists of 15 articles of implementation and struggles around free transit in 14 cities or regions. (Two chapters are about Bologna, Italy.) Half of these are in Western Europe, three in Canada and the United States but the editors also include chapters on Brazil, Mexico and China.

The local chapters are bookended by four broader essays, two by the editors and two by a city development researcher. These provide some theoretical overviews and concrete proposals.

As is to be expected in a collection like this, some are more inspiring and well written than others. On the whole, it’s well worth reading for transit activists or any class-conscious activist considering projects that confront capital’s control of our lives, and are winnable on a local level.

Perhaps the most inspiring example is Bologna, Italy in the 1970s. Long run by the Communists, “Red Bologna” also had a tradition of public participation and a strong democratic spirit in the citizenry.

In a chapter taken from the English translation of his section of Red Bologna, Swiss journalist Max Jäggi details the amazing changes brought about in a city that “had more cars in proportion to population than any city in Italy except Turin,” where “pedestrians were relegated to second class road users,” buses had “used up most of their petrol in standing still” and “200,000 cars a day poured into the Centro Storico and created an almost permanent haze over the area, causing the leaves in parks to turn grey.”

The reasons for the successes of the project are myriad, but among the most important were a coherent and specific vision of the changes, public involvement and a visionary administration. The Communists recognized that while they had not “developed a concept of socialism in one city,” still “they have provided norms of conduct and public management different from those” which had prevailed in Italy.

The beauty of the plan was that it drew a picture of a Bologna where humans, not cars, were the center of planning. Pedestrian zones were created in the city center and nearby neighborhoods. Large investments were made in transit; fares were done away with during rush hour and very cheap at other times; private automobiles were rendered uneconomic for daily work commutes and buses were given preference.

Motorists retained unrestricted access to a mere one fourth of city streets. Other were open only to local residents or business deliveries, to buses or cabs, at certain times of day, or in some cases, only to pedestrians.

There was strong opposition from predictable quarters, but by involving residents in discussions and public debates, city leaders built strong support.

Within two years, car trips into the city dropped 25% and transit use rose 50%. According to Jäggi in 1974, “Now Bologna’s street scene has changed. Children play basketball and old people rest on benches in the Piazza del Unitá — in the workers’ district of Bologna — where before endless queues of cars idled at traffic lights.”

Michael Brie, a professor with the Rosa Luxemburg Foundation in Berlin and policy committee member of the party Die Linke, describes another success, this one in the Flemish Belgian city of Hasselt, capitol of the province of Limburg.

A mid-sized city of less than 80,000, the medieval town was being destroyed by increasing traffic. Surprising most, Steve Stevaert of the Flemish Socialist Party (social democrats) was elected mayor in 1994, partially on a platform opposing “new infrastructure for automobiles and proposing instead a city for people.”

Each day 150,000 people from the surrounding area, twice as many as live in Hasselt, come into town to shop, and 40,000 students as well. Some 22% more people work in Hasselt than live there. Most of these traveled by car.

Mayor Stevaert ended transit fares, but as in Bologna, that was only part of the program. The brakes were applied to a proposed third ring road, and the inner ring reduced from four to two lanes.

Bicycle and pedestrian spaces were increased. Two-thirds of city center parking spaces were repurposed and rates for those remaining substantially increased. Commercial delivery times were restricted and speed limits lowered.

The result was a 13-times increase in transit passenger trips between 1996 and 2006 while the population increased by just 5%. This obviously required a significant increase in spending on public transit. They added new buses, a dense network of stations, a coordinated link to regional transport and headways (times between buses) on lines were decreased to just five minutes in many cases.

There were costs associated, but less than $30 per resident per year. Even this only counts the transit budget and ignores savings in medical expenses from decreased pollution and increased exercise, not to mention personal gas costs.

It wasn’t an unmitigated success. Most people still have cars and still use them, but on a qualitative level, they improved the livability of the city center.

In 2012, the social democrats had to form a local coalition with the Greens and the Christian Democrats, a party supporting austerity measures. This led to an end to universal free fares, although retirees, those under 20 and those with low incomes could still ride free. Fares for others were raised to just 60 euro cents. The culture had shifted, though, and traffic jams did not return.

Brazil: From Dream to Nightmare

In ones of the few chapters that ventured outside the developed world, Paula Aftimus and Daniel Santini covered Brazil. Aftimus is a Brazilian journalist and Santini is a project coordinator for the Brazilian office of the Rosa Luxemburg Foundation.

In June 2013 in response to another transit fare increase, the Free Pass Movement (MPL in Portuguese) led demonstrations as thousands took to the streets in cities across Brazil. Cops with “black Robocop suits, big shields and a vast armory … used tear gas and rubber bullets to disperse the crowds,”  shooting out the eye of a reporter covering the actions in São Paolo.

Intended to spook the populace, the brutality of the government instead made people angrier and “protests grew larger after each act of repression.”

Workers and families joined crowds of students. Demands for free transit grew to include education and public health policies. Nervous about the support the public showed for the demonstrators, the fare increases were scrapped and the federal government promised new programs addressing the other issues.

Plans and demands for free transit went back to the end of Brazil’s two-decade military dictatorship in 1985. The closest came in São Paulo, Brazil’s largest city. The city’s first woman mayor, Luiza Erundina, was elected in 1988. Her transportation sectary, Lucio Gregori, was a supporter of free transit and drew up plans for the public and private sector to finance it. The private sector and their corporate media led a campaign and defeated it.

Gregori argued for separating the cost of running a transit system from fares, noting that private business is the greatest beneficiary of transit and therefore should pay for it. Erundina was later elected five times as a federal representative, presented and eventually won the addition of transport as a social right in the Brazilian constitution.

Sadly, as with most constitutional guarantees, not only in Brazil, this one remains unfulfilled.

In a compilation written by a variety of authors, the success of free transit movements, the quality of writing and the coherence of politics vary widely from chapter to chapter, but on the whole, it’s a valuable addition to the library of those thinking about mobility as a right.

Some of the chapters with the least success do present analyses of the losses. The most valuable theoretical and strategic insights are in the local examples. In the most successful and inspiring examples, we can pick out some important lessons.

It helps to have both base involvement and a radical or at least supportive city administration. Maintaining substantial changes requires a broad focus beyond just free fares. These factors may seem obvious, but the specific lessons from the case studies are essential for activists.

Unfortunately, the chapters explicitly approaching theory and vision do not offer as much.

Jan Sheurer, a research fellow at Curtin University in Perth, Australia, studying social and cultural aspects of mobility and disruptive transport technologies, presents opening and closing chapters for the book.

He makes some dubious claims, including an argument that car “sharing” (i.e. private taxis with a website) outfits like Uber and Lyft “blur the boundaries between public and private transport,” ignoring the dominance of the industry by such private profit-driven companies.

He puts forth, seeming as a positive effect, that Uber, Lyft and autonomous vehicles “may enable transit operators do away with a sizable portion of their staff.” This glosses over transit unions, the most organized force pushing for greater transit. Many of his suggestions are apolitical and technocratic, assuming that political change can be made with just a good idea rather than through organization and power.

Despite that, in his second chapter Sheurer presents what looks like a useful tool he and colleagues developed to chart a multi-variate, quantitative map of effects of access to transit on property values. He proposes additional property taxes to nab windfall profits that currently accrue to real estate owners.

There are issues with the property tax model (why not use an aggressively graduated income and wealth tax?)  – but it does present an interesting use of data which he points out could lead to greater utilization of land held by speculators near transit.

Regardless of any issues with the attempts at theory, the local examples easily outweigh any criticism. They demonstrate the value of blending base struggles with government leadership.

The modern left has a tendency to crane its head back, always looking at the highest elected bodies. Without explicitly addressing it, the victories presented here demonstrate the value of lowly transit authorities and city councils as well as the necessity of wide-scale involvement.

The examples in the book that were the most successful tended to be both broad and specific. As the Bolognese said, “Free fares were just the beginning.” In addition to a variety of methods of pulling people into transit: free fares, frequent service, dense networks, there are also forces to push people out of private cars: reduced road access, fewer and more expensive parking spaces, lower speed limits.

To win support, change can’t simply come from on high, but whether it comes from a popular movement or elected officials, in order to succeed it must be broadly consultative.

Transportation costs in money and time can be substantial for those who have no option other than a mediocre or poor city bus. Recent events in two generally right-wing states offer the possibility of an issue that could be used to organize and to win.

Places like Luxembourg or Estonia (save this chapter for dessert) with the plausibility of nationwide free transport may seem a world away from our political experiences in the USA, but if it can happen in Texas and Missouri, it can happen anywhere.