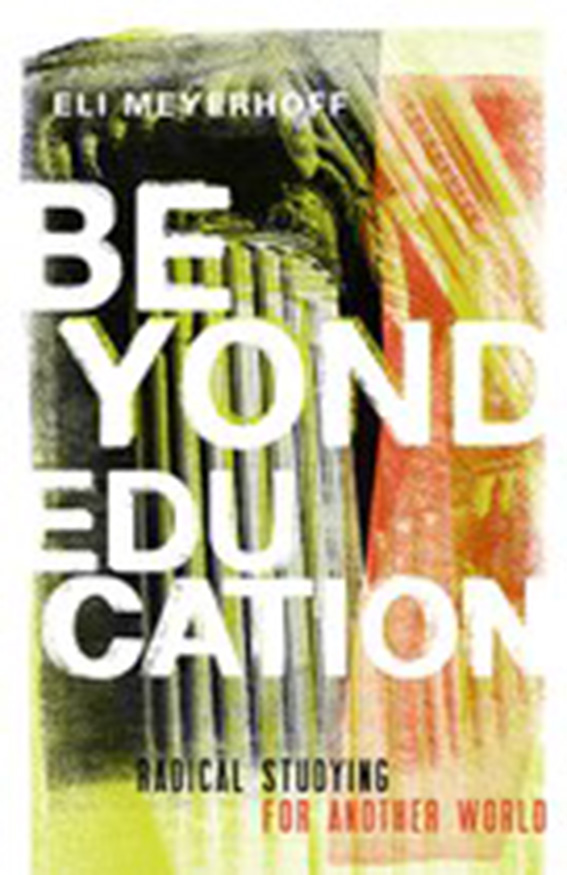 Beyond Education:
Radical Studying for Another World
By Eli Meyerhoff
University of Minnesota Press, 2019, 277 pages,
$24.95 paperback.

THEORY WITHOUT PRAXIS is empty; praxis without theory is blind. That Leninist twist on the old Kantian formula is perhaps never more necessary to remember than in times of crisis.

Though written before COVID-19 and the police murder of George Floyd, Eli Meyerhoff’s book Beyond Education: Radical Studying for Another World represents one of those theoretical interventions without which our praxis can end up wandering around in the dark.

Nowhere is our present crisis felt more acutely than in public education. COVID-19 and the government’s non-response to the pandemic has left teachers such as myself in limbo for much of the spring and summer.

We have no good options. Many of us will be forced to risk our lives returning to in-person instruction; many of us will be expected to be effective using online instruction tools we have not been trained in; still more, undoubtedly, will face the possibility of layoffs as a result of austerity measures as districts claim a loss of tax revenue.

Just as important, the murder of George Floyd has pushed many of our students into activist roles, demanding the removal of School Resource Officers (SROs), or police officers stationed at schools, from school buildings. The international uprisings have also further intensified focus on the built-in class and racial inequalities of the public education system.

The beginning of Meyerhoff’s book is a critique of the cottage industry of the “education crisis.” Our education system, both K-12 and post-secondary, is perceived as somehow failing in its mission, as less effective than it used to be. Innumerable grifters/innovators have written enough books to fill a library on various solutions to this crisis of education.

Propping Up the System

Meyerhoff’s book is a reminder of the crucial role that education as a mode of study has played in providing institutional and philosophical support for capitalist accumulation. For teachers, this confirms what we’ve always known: the crises we experience in our classrooms are concentrated reflections of crises within the capitalist mode of production.

Meyerhoff’s historical-critical analysis exposes ways in which the education system reinforces and props up capitalist modes of accumulation. On the other hand, persistent attacks on public education from the right expose how capital is invested in dismantling one of the last truly universal social programs left in this country.

Many teachers’ unions are recognizing this contradiction. In our union local, we say we want to defend and transform public education — we must defend it from privatization while understanding that it must be transformed if it is to shed the oppressive practices it carries over from the mode of production it supports.

This position of playing both defense and offense is difficult during normal times. In the present crisis, the stakes of the outcome of this struggle have never been higher. So what are teachers to do?

The following are lessons drawn both from the analysis in Meyerhoff’s book and the current struggle.

Issues for Fighting Back

Support student demands for the removal of SROs. Every year, in an effort to address racist practices in schools, school districts all over the country put on anti-racist training and implicit bias workshops. They adopt the Black Lives Matter In Schools demands, and some even send teachers to weekend-long lectures on the history of racism in the United States put on by the Racial Equity Institute.

Yet every year, there are still significant disparities in how white students are punished relative to non-white students, non-white students still feel unsafe in schools, and resources remain unevenly distributed. These problems are not the result of individual teachers having racist opinions — they are reflections of social problems.

As Meyerhoff points out, these issues are longstanding problems at the very root of our education system. In his study of the 1960s “dropout crisis,” he shows a cartoon in which young Black people migrating from rural to urban areas were portrayed as so many sticks of “social dynamite,” a dangerous mass with revolutionary potential.

They were a problem to be solved — and the education system still treats its students of color this way. The school-to-prison pipeline, the mechanism by which Black students’ school misbehavior is punished as criminal activity, is unobstructed by merely training teachers to think differently.

The single most effective way to disrupt the school-to-prison pipeline and make schools significantly less racist, is to remove SROs from school buildings. Policing is a racist institution designed to lock up poor people of color. If the agents of this institution no longer have such easy access to this demographic during the school day, they won’t be as effective.

This demand, being pushed by students all over the country, is winning as Denver, Minneapolis and Oakland have already removed SROs from their buildings. Teachers’ unions should get behind this even if they don’t think they can win it right now. The international uprisings resulting from the police murder of George Floyd have unlocked a door in mass consciousness. Teachers should play a role in pushing it open.

Organize the rank-and-file. There are no shortcuts to deep, fighting unions that can exercise power. Throughout Beyond Education, Meyerhoff wages a war on political and philosophical closure, the act of cutting off possibilities through the imposition of too-easy “solutions” that suppress disagreement.

In his study of the Experimental College of the Twin Cities (ExCo), which Meyerhoff himself played a role in organizing, he believes it was precisely this impulse to shut down discussion and paper over contradictions that led to the project’s demise.

Here in the South, where union density is very low, the NEA’s decision to support any Democratic Party politician no matter what serves as a way of papering over the conflicts of the area.

There are a great many teachers, especially in rural areas, who will never vote Democrat and will not join a union that is seen as an unthinking water-carrier for the Democratic Party. The NEA’s position implies that somehow if we can just get the right people in charge, the problems with the education system can be fixed through policy — not militant worker action.

But those teachers opposed to the Democratic Party experience the same workplace conditions as their fellow teachers who support it.

As we saw in West Virginia and Arizona a few years ago, many teachers who won’t vote for Democrats will go on strike —- and win. This is the kind of action teachers’ unions should be focusing on.

Similar to how an unorganized rent strike swept the country during April and May simply because many people could not pay their rent, we might be looking at an unorganized wildcat strike among teachers unwilling to risk their lives for in-person instruction.

In a fascinating study of the black plague in Europe, Meyerhoff examines how non-human actors in history, such as germs, play a significant role in the class struggle. For example, the flu epidemic during the Second World War probably affected the course of world history as much as any fighting.

COVID-19 is undoubtedly playing a similar world-historical role, albeit on a smaller scale. Regardless, teachers should not go back to work if they are being forced into in-person instruction. There isn’t a school district in the country equipped to handle safe in-person instruction right now.

I found Beyond Education to be a thorough and provocative book with plenty to say to our moment. It deserves an equally thorough review, but given Meyerhoff’s political commitments, I am sure he is just as appreciative of the use of his book as a theoretical jumping-off point for militant praxis.