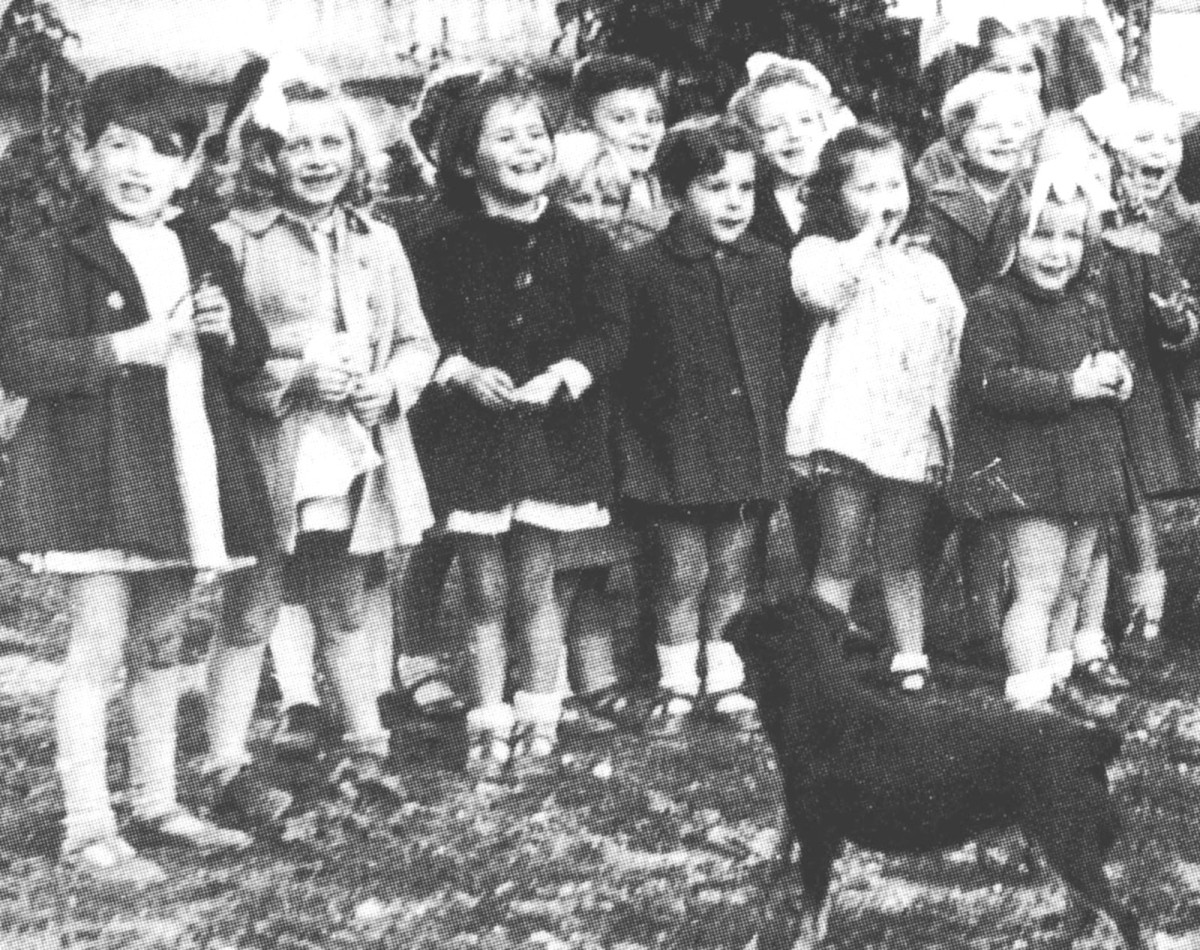 Raincy-le-Plateau orphanage 1946: Suzanne (second from left) with other children and their dog, Zezette.

SUZANNE WEISS’S THRILLING and sometimes harrowing account of her life, from war orphan to immigrant to socialist activist, can be read almost as a catalog of liberation struggles from the post-World War II era through the first decades of the 21st century. Her personal story meshes almost seamlessly with the political history of those years.

For her contemporaries, some of the fascination in reading this account will come from a shared experience — growing up in the stifling 1950s, the sudden expansiveness of the ’60s, the life-altering embrace of radical politics, then navigating a route through the thicket of political life without a compass.

But the core of the story is not one that most of her readers will have experienced — born in 1941, the war refugee child of Polish and Russian Jewish resistance fighters, raised in French orphanages, adopted by Jewish American “progressives,” seeking her place in the world. Nevertheless, the writer’s voice is so engaging that her personal story grabs the reader from the very start, and becomes a compelling guide through her life and adventures, both personal and political, to almost the present day.

On one level Weiss’s story reads as a personal odyssey, and on this level is irresistible.  After the bitterness and confusion of losing both parents at an unbearably early age — her mother to the Nazi death camp at Auschwitz and her father to war wounds — and moving from one French Jewish agency orphanage to another in a mostly loveless early childhood, she put Europe behind her literally and figuratively when she was adopted and moved in 1950 to the United States.

Although she turned her back on the land and language of her birth, the yearning for family, and for information about her parents, never left her. She was able to make contact with surviving relatives and began to glean information about her parents, helping to neutralize the toxic sense of abandonment. And she came to realize that it was indeed love and solidarity that had rescued her from death as an infant and protected her, and that helped her develop a sense of her Jewish heritage.

Without the resistance to Nazism, by Jews and non-Jews, and the solidarity of common people, she and thousands of other war orphans would certainly have perished. It was a lesson that helps throw into relief the importance of solidarity with today’s refugees, fleeing climate catastrophes and political upheavals of all kinds — a lesson Weiss assimilated and has acted upon with conviction.

On another level, Holocaust to Resis­tance is an account of the formative political moments in the lives of many of us who came to political consciousness around the same time as Weiss, as radicalization swept our generation, fostering a new consciousness and new activism on many fronts.

During the ’60s, the U.S. Socialist Work­ers Party experienced dramatic growth because of that new radicalization, and developed some authority and influence in the growing social movements challenging the status quo. Weiss’s youthful entry into the SWP positioned her to be a participant in many of these struggles for justice and self-determination.

Solidarity with the Black struggle for civil rights, the anti-Vietnam War movement, support to the fight against South African apartheid — these were Weiss’s early and enduring commitments. After seven years working in the party’s printshop, and a stint working as secretary to party founder James P. Cannon, she took grueling industrial jobs in New Orleans and Virginia, and learned first-hand the difficulties facing women — and Jews — in much of American life.

When the SWP went off the rails in the early ’80s, Weiss was among the first to notice that its claim that American workers were moving into the center of political life was an illusion. (She does not mention other negative developments in the SWP around the same time — its turn away from Trotskyism to appeal to the Cuban leadership; its turn away from the abortion rights movement to appeal to more socially conservative women in the garment industry, where the party was trying to establish a base; its abrupt ending of democratic norms for discussion of debated issues.)

She became disaffected from the party, and after a decade-long hiatus and a move to Toronto, opened a new chapter in her life as a writer for the journal Socialist Voice and an activist in the movements to keep Canada out of the war in Iraq, combat the fossil-fueled climate crisis, and support Palestinian human rights.

Here she benefited from a lifetime of experience in political liberation movements: her accrued skills at coalition-building, debate and mediation were the glue that helped keep these movements alive and thriving.

Weiss assesses her experience in the SWP frankly. “Was joining the US Socialist Workers Party in my youth a mistake? No, I am grateful to the party that educated and oriented and helped me make sense of a confused and turbulent world. In the 1980s, the old guard passed from the scene, and their replacements derailed the party. But its founding spirit guides [us] as we continue our work as activists in resistance and struggle for a just and better world, and for equality, love, and peace for the downtrodden, for immigrants who seek refuge, for the Palestinians who fight for justice, and for Indigenous Peoples, who teach us to repair our relationship with the earth.” (260)

Some of her lifelong areas of activism included Cuba (the revolution becomes a honeymoon destination); Poland (where she used a visit to her mother’s hometown as an opportunity to meet with leaders of the Solidarnosc movement); Venezuela (where she participated in massive demonstrations in the capital), Bolivia (whose Evo Morales explained the importance of confronting the climate crisis for the benefit of the world’s people).

The Morales connection spurred Weiss to begin organizing with environmental activists, allying with Indigenous groups to oppose the building of a pipeline to exploit Canadian tar sands, and educating about the tar sands industry’s responsibility for disastrous global climate changes.

Many Jewish Holocaust refugees and survivors fled to Palestine before, during and after the Second World War, one of the few places that would admit them — this initially included Weiss’s father, who fled to Palestine from Russia before he went to France to fight the Nazis with the Resistance.

The formation of Israel in 1948 was promoted internationally as a necessary step to give Jews a safe haven from anti-Semitism and genocides for coming generations. This was not a unanimous position by any means. Long before Israel was formed by the United Nations, it became clear that it was not a land without a people.

Much of the international Jewish community, including many outstanding public intellectuals and rabbis, regarded Jerusalem as a spiritual and emotional center, but had opposed putting a Jewish state there at the expense of the Palestinian population.

The Nazi holocaust and the destruction of European Jewry, plus Zionist control over Jewish emigration from the displaced persons camps, put an untimely end to that discussion.

In 1947-48, Jewish militias aided by the new Israeli army violently expelled most of its indigenous population, 750,000 Palestinians whose families in many cases had lived on their land for generations, from their homes and land, demolished more than 500 of their villages, and killed many thousands of people.

To this day Israel prevents the survivors and their descendants from returning, in violation of all international law. Hundreds of thousands today live in squalid refugee camps in Lebanon, Jordan, Gaza and elsewhere. Even within Israel, its Palestinian citizens face restrictions on where they can live and what occupations they can fill.

The theft of Palestinian land has been non-stop in the past 72 years, and has speeded up in the years since Israel occupied the West Bank and Gaza (1967), and above all since the notorious Oslo accords provided the window-dressing of peace for Israeli territorial expansion (1993).

But international public opinion has turned against the Israeli government as its goals have become clear to all — to eliminate as many Palestinians as possible; seize as much Palestinian land as possible; build settlements on that land for Jews only, who can vote in Israeli elections and get the advantage of Israeli protections, while subjecting Palestinians to military law, arbitrary attacks, and shoot-to-kill; deny them control over their water and resources; and strangle their economy.

Suzanne Weiss had never been a Zionist — she had always believed that “Never Again,” the slogan of Jewish defiance to Nazism, also applied to genocidal attacks on others, including Palestinians.

When then-Israeli Prime Minister Ariel Sharon planned to visit Toronto in 2005, there was widespread outrage.

Sharon had Palestinian blood on his hands dating back to his days in the Haganah (predecessor of the Israeli army), conducting hit-and-run terror attacks on Arab villages in 1947-48, and later leading Unit 101 responsible for the infamous 1953 Qibya massacre among others.

As Israeli Defense Minister in 1982, Sharon was known as the Butcher of Beirut for enabling Lebanese militia attacks on the Palestinian Sabra and Shatila refugee camps in Beirut, killing thousands of civilians. He was also a champion of the settlement project in the West Bank.

Weiss signed her name to a letter opposing Sharon’s visit to Canada, and added “Holocaust survivor.” This was the beginning of her outstanding activism as a supporter of Palestinian human rights.

Making the connection with her previous efforts against South African apartheid, she spoke against Israeli apartheid toward Palestinians. And reaching deeply into her Jewish heritage, she pulled out the traditional solidarity of Jews with oppressed people everywhere, paying tribute to her parents’ sacrifice as part of their struggle for human values. Thus, she understood that her support of Palestinian human rights flows directly from the best values of her Jewishness.

It’s impossible not to be moved by this development in the author’s life. At an age when she could have retired from contentious issues, instead she embraced perhaps the most contentious one of all.

Many Jews of her generation — our generation — turn their faces away from the plight of the Palestinians because it challenges long-held beliefs that are too painful to examine. But to Weiss, the solidarity and humanity that saved her life as a war orphan are indivisible — nobody can be excluded — and this recognition provided the strength to take an unpopular stand in favor of Palestinian rights.

The enduring lessons of this book — that justice and human rights are indivisible, that human solidarity can redeem even the grimmest debacles, that people who don’t share all our values can be important allies in a common struggle — these lessons badly need to be disseminated widely. That they can be delivered in such a palatable form as Weiss provides, in a human story of alternating pathos and triumph, should give us hope.

If we can assimilate these lessons, we’ll be in a better position to continue the struggles that Weiss has been part of for her entire life.

As Weiss put it, speaking to French students from the Auvergne region, where as a baby she had been rescued and saved from certain death by a local farm family:

“I want to thank the people of Auvergne who gave refuge to me and so many others, Jews and non-Jews, for their courage in the face of danger. Today, we face similar problems with refugees seeking sanctuary. We need the spirit of those times — of solidarity and humanity — to face today’s challenges. We must follow the example of Auvergne and be true to our humanity.” (291)