Against the Current: Which events of 1968 were you involved in? How did that event/those events affect you personally and politically at the time? 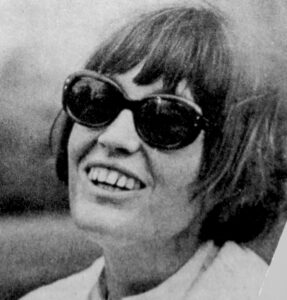 Roxanne Dunbar Ortiz: By the end of 1967, I was a history graduate student at UCLA at the stage of writing my dissertation. I was active in the campus anti-apartheid organization, antiwar protests, and union organizing of teaching assistants.

After three months in London in the summer of 1967 working with the leadership of the African National Congress, I no longer had the heart to continue my graduate work, so, in short, I burned my bridges, and moved to Berkeley at the beginning of 1968 to become a full time revolutionary, particularly in the “Free Huey!” [Newton, Black Panther Party leader] movement.

I had been furious at the suppression of women’s leadership that I observed in the ANC, and even more so in the Black Panthers and solidarity movement. I had been doing historical research into social movements in the United States, and was particularly interested in the abolitionist movement and the spinoff feminist movement in the 1840s and 1850s.

I was studying Marxism and trying to develop a historical analysis of the development of the United States. I had concluded that racism was the barrier to workers’ consciousness. But I was also becoming more and more angry as a woman and seeing that revolution would be impossible without women’s full participation and leadership.

Following the assassination of Martin Luther King, Jr. I freaked out and concluded that nothing less than a revolution that would destroy U.S. imperialism, racism, and capitalism would suffice. I decided to go to Cuba where I would try to learn to be a revolutionary. I spent nearly three months in Mexico waiting for a visa to Cuba, and in Mexico City I got involved in the protests, mainly by students, against their government’s cooperation with the CIA, and they were threatening to disrupt the Olympics to be held in October in Mexico City.

Again, the male supremacy drove me crazy. When I read that Valerie Solanis had shot Andy Warhol and that she had been distributing a call to arms to women, called the S.C.U.M. Manifesto, I was exhilarated. I had no idea that hundreds of other movement women were thinking exactly as I was about the need for women’s liberation.

I decided to go to Boston, a center for antiwar organizing, which also had been the center for abolitionist and feminist organizing in the 1840s, to start a women’s liberation movement.

I started by announcing a course on women’s history at the Boston Draft Resistance Group’s liberation school, and the eight women who showed up there became the core of Female Liberation, Cell 16.

Several of the women were on welfare and active in the National Welfare Rights Union, another was a prostitute, another a lesbian in the Daughters of Bilitis, and another the daughter of the founder of Women’s Strike for Peace, the only one of us who grew up with a feminist mother. We started a journal, the first one in the Women’s Liberation Movement, No More Fun and Games, and began doing militant public events and organizing a conference.

We started a women’s self-defense class in Tae Kwan Do, and mainly recruited from there and from the many college campuses in the Boston area. By December, we had published two issues of our journal and had connected with women’s liberation groups that had formed that year in New York, Gainesville, D.C., and Chicago.

ATC: How did you see yourself as a woman who was a political activist before, during and afterwards? How did you relate (or not) to the rise of the Women’s Liberation Movement?

RDO: I grew up poor, rural and fundamentalist Protestant (in Oklahoma), and accepted strict gender roles, but the women in that setting were tough and hard working. There weren’t many privileges to go around, so I didn’t notice the male supremacy that permeated the culture.

I married young into a family that was a little better off (the men were union carpenters) and continued accepting my (inferior) role. But I was a voracious reader, and began reading Simone de Beauvoir’s novels (this was 1958). My husband and I moved to San Francisco in 1960 after he graduated from engineering school, and he had promised me that he would send me to college since I had mostly supported us while he was in college.

I went to San Francisco State, majoring in history. It was the time of the Southern Freedom Rides and organizing for Mississippi Summer, plus all kinds of actions locally against segregation. I had a baby in 1962, and being married with child made it difficult for me to get involved, and my husband was becoming more conservative and disapproved of the burgeoning movement.

I read Simone de Beauvoir’s The Second Sex in the summer of 1963. It changed my life, not only introducing me to Marxist and Freudian theory, but also to women’s oppression with which I totally identified. However, I thought marriage and family were the problems. A few months later I left my husband. He fought for and won custody of our child.

I entered graduate school at UCLA and quickly became involved in local civil rights (farmworkers’ and African Americans’), anti-apartheid, and increasingly antiwar struggles. Being a free woman, I thought I had overcome oppression. I was also among the leadership in the campus movements and considered an outstanding graduate student (there were only three women among 100 history grad students, and no women professors).

Not until returning from London with the ANC did it become obvious to me that women as a group were oppressed and that I could not free myself as an individual. So, I was one of the founders of the women’s liberation movement, and the rise of the movement signaled to me that there could be real revolution throughout the world and equitable socialism.

ATC: How did you view your particular struggle in relationship to other struggles that were taking place internationally?

RDO: Having worked directly with the African National Congress early in my radicalization, I was always very aware of other struggles internationally. I was also specializing in Latin American history, and the Cuban Revolution was paramount in terms of solidarity.

I was torn after I threw myself into the women’s liberation movement. At first my ANC allies were critical of my militant feminism, as were African Americans and Chicanos I worked with. They made me aware of how reactionary essentialism can be. I was committed to an anti-racist, anti-capitalist, anti-imperialist women’s liberation movement along with a significant number of other WLM founders, but we were never dominant and eventually were marginalized by what became defined as the women’s movement or feminism.

ATC: Were you involved in a movement or socialist organization at the time, or choose to join one subsequently? Do you have reflections on that experience?

RDO: The contradictions in the Women’s Liberation Movement and the crucial importance of the anti-imperialist and anti-racism struggles led me to join the Revolutionary Union (later became Revolutionary Communist Party). That didn’t last long, as the organization split over white and male supremacy being integral to class analysis, and those of us supporting that view left.

I didn’t join another Marxist-Leninist organization until the late 1970s (Line of March). The RU experience was very negative. I definitely concluded that “democratic centralism” was authoritarian and wanted no part of it.

ATC: What are the lessons you’d like to pass along to today’s activists?

RDO: It’s still important to figure out the United States. As activists (or citizens in general) go around the world, we least understand our own history. And until we do, we will not be able to figure out how to dismantle the U.S. empire.