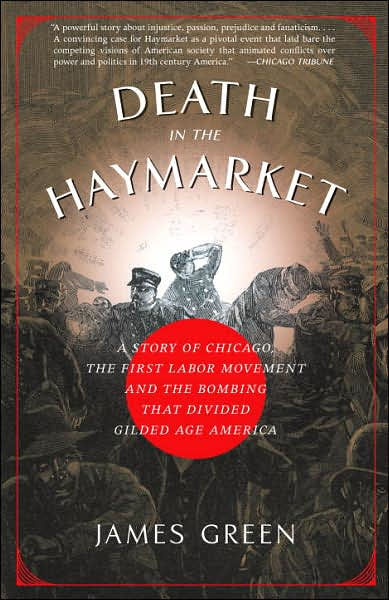 JAMES GREEN’S DEATH IN THE HAYMARKET tells the story of the anarcho-syndicalist militants accused of perpetrating the throwing of a bomb that killed police at a workers’ rally at the Haymarket in Chicago on May 4, 1886. They were subsequently framed, convicted, and four martyrs hanged by the judicial system of Cook County on “Black Friday,” November 11, 1887.

Death in the Haymarket is clearly one of the very best histories of the working class that has appeared in recent decades. Green does much more than recount the story of what happened between May 4, 1886 and November 11, 1887. He situates the events of Haymarket in a much broader context — the social, economic, political, and cultural history of the working class and their capitalist exploiters and oppressors in Chicago from the end of the Civil War through the events of 1886-87 and beyond.

By so doing, Green enables the reader to grasp the enormity of the social forces in conflict in Chicago and elsewhere in the United States during the two decades that followed the Civil War. Green clearly demonstrates that what happened in Chicago in 1886 and 1887 was a significant expression of the titanic struggle between labor and capital during the last half of the 19th century.  The two inherently adversarial key components of modern capitalism — the emerging modern industrial capitalist class and the modern industrial working class in formation — engaged in a monumental battle to establish a relationship of forces.

With the grace and descriptive power of a novelist, Green devotes the first 10 of his 16 chapters to the struggles between labor and capital in Chicago (and elsewhere) in the post-Civil War decades, as the new capitalist class built enormous fortunes by extracting an extraordinarily large amount of surplus value from an increasingly impoverished working class. At the same time, he shows how the working class organized to defend itself by joining and building an unprecedented new labor union movement, hallmarked by the Knights of Labor.

Drawing upon the pioneering methods of the previous generation of brilliant labor historians, such as Herbert Gutman, David Montgomery, Eric Hobsbawm and especially Edward (E.P.) Thompson, Green describes how, beginning with the great national railroad strike of 1877, the industrial capitalists set in motion a combination of tactics designed to defeat and repress the militant workers’ movement.

These methods included the extensive use of scabs drawn from the large unemployed reserve pool of labor; the use of brute force by state militias, federal troops, private armies of hired thugs and the police; the use of the law and the courts; and the middle classes’ inflamed fear of the working class promulgated by pro-capitalist newspapers and other molders of public opinion.

Green describes the formation of the new industrial working class, comprised in the rapidly growing new industrial cities, such as Chicago, of hundreds of thousands of recently arrived immigrants from Europe — most from Germany, Bohemia and Scandinavia. As the 1880s unfolded, many of these workers were organized by the first significant national labor union in the United States, the Knights of Labor.

Within the newly organized working class, a wide variety of political views emerged, including those of socialists influenced by the writings of Karl Marx and Frederick Engels and a smaller, but more vocal, current of radical militants who became known as anarchists.

These militants were not content with piecemeal, incremental improvements in the conditions of the working class, but instead advanced the need for a revolutionary transformation of society that would result in a “cooperative commonwealth” where workers would democratically determine their working conditions.

Chief among the leaders of this vocal revolutionary left current were August Spies, a recent immigrant from Germany, and Albert Parsons, a former Confederate Army soldier from Texas, who had been a partisan of the freed Black slaves fighting racist oppression during Reconstruction. The “anarchism” that Spies, Parsons, and their comrades espoused had little in common with the “anarchism” of Karl Marx’s political opponent, Michael Bakunin, but was more akin to a revolutionary socialist vision of a new society that would replace capitalism.

With their comrades, Spies, Albert Parsons and his wife Lucy, a dynamic militant agitator of African-American origin who was also from Texas, campaigned relentlessly against the abuses of the industrial barons using inflammatory rhetoric that might today be characterized as “ultraleft.” They concentrated their organizing efforts in the struggle for the eight-hour day, which had been a central goal of the working class since the end of the Civil War, and insisted that workers should continue to be paid for a 10-hour day even after their workday hours were reduced.

On May 1, 1886, the first May Day, a massive strike in support of the eight-hour work day occurred in Chicago. Two days later police fired on workers on strike at the huge McCormick Reaper Works, killing six.  Spies, Parsons, and others organized a protest rally to be held the next night, May 4th, at the Haymarket on Randolph Street on the western edge of Chicago’s central business district.

The evening protest rally was almost over, when a large force of police marched toward the dispersing crowd. Somebody threw a bomb into the ranks of the police, killing one of them. The police opened fire indiscriminately on the rally (and in the process on their own ranks), killing rally participants, bystanders and policemen.

The next day August Spies and six other anarchists, Samuel Fielden, Adolph Fisher, Louis Lingg, George Engel, Michael Schwab and Oscar Neebe, were arrested and charged with conspiracy to murder. Albert Parsons had fled to Wisconsin, but returned and turned himself in as the trial of the accused began.

The trial, held in a frenzied climate of fear and hatred whipped up by the press, was presided over by an openly biased judge before a hand-picked jury of 12 men, all of whom stated in advance that the accused anarchists deserved to be hanged. In a gross miscarriage of justice, the eight accused men were convicted and sentenced to death.

Just prior to the date of their execution, the Governor of Illinois, Richard Oglesby, commuted the sentences of three of the eight men to life in prison. On the eve of the execution, one of the condemned men, Louis Lingg, confined to his jail cell, died after a dynamite cap exploded in his mouth. His death was called a suicide, although many thought that Lingg had been murdered by the police.

At noon on November 11, 1887, in a structure behind the Ccurthouse and jail, Spies, Parsons, Engel, and Fisher, clad in white hoods and robes with their hands bound behind their backs and their legs tied together, were dropped through the scaffold trapdoors, where they dangled from their ropes until each strangled to death.

Two days later, the largest funeral procession in Chicago history accompanied carriages carrying the five corpses to the railroad station and thence by train to Waldheim Cemetery west of Chicago, where they were buried.

On June 25, 1893, a beautiful monument honoring the five Haymarket martyrs was dedicated in the Waldheim Cemetery.  One day later the courageous progressive Illinois Governor, John Peter Altgeld, pardoned the three imprisoned men who had not been executed, Michael Schwab, Samuel Fielden and Oscar Neebe.  But as Green notes, the militant labor movement in Chicago never recovered from the impact of Haymarket.

Seven years after Spies, Parsons, Engel, and Fisher were hanged, the great strike of the Pullman Palace Car workers in Pullman, Illinois, George Pullman’s model company town 12 miles south of Chicago, a strike led by Eugene V. Debs, was smashed. The relationship between the capitalist class and the industrial working class in Chicago set by the events of Haymarket was further decisively established.

Like his colleague David Roediger (who co-edited with Franklin Rosemont The Haymarket Scrapbook, Chicago: Charles H. Kerr, 1986), James Green is one of the very best contemporary historians of the working class. His Death in the Haymarket is a must-read for everyone interested in the history of the working class in the United States.