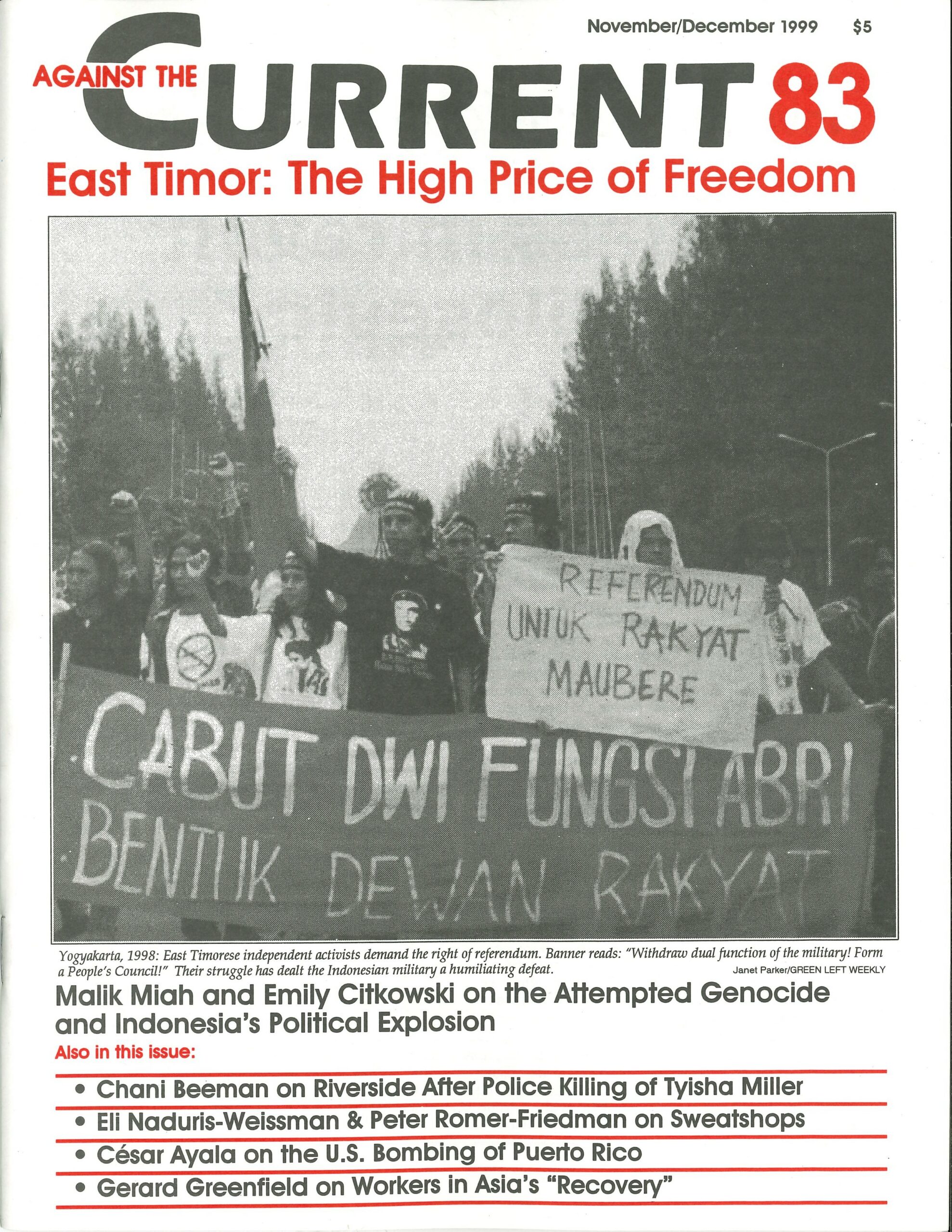 THE MAY 7 “victory” for Ethnic Studies needs to be recognized not as another radical milestone at UC Berkeley, but as a series of political events in which it became a disturbing priority to suppress dissent, concentrate decision-making power, and enforce law-and-order within the twLF movement itself.

It was important as a moment that brought political actors back into the public space and exposed, yet again, the willingness of the administration to use police violence to maintain an unjust status quo. But equally important are the lessons we learned about how we often restrain our own most radical potential for change in action.

The vibrancy, openness and invigorating collectivity spurred by the initial Barrows Hall takeover was effectively sacrificed on the altar of Chancellor Berdahl’s negotiating table, in other words, to assure that nothing essential was changed.

Some recent history on the struggle is necessary for context here. When students on April 14 occupied Barrows Hall, the “home” of Ethnic Studies, a list of demands was issued to the chancellor including provisions for increased faculty positions, funding for research and recruitment, expanded space, a student center, a mural and, perhaps most importantly, full amnesty for students who might be arrested for exercising their First Amendment rights of free speech and assembly in a public space.

When the police did eventually sweep down on students, arresting them with the use of pain holds and wrist locks, tearing one student’s ear and punching another in the face, charges were placed upon nearly fifty students for trespassing. Everyone was cited for this charge and several others (seven in all) received additional charges for allegedly resisting arrest.

Two other students, not coincidentally both Black males, were subjected to even harsher criminal charges (there were only half a dozen Black folks out there and two ended up the most severely sanctioned).

At that point it was noted, publicly, that neither students nor faculty would even consider negotiations if amnesty was not guaranteed in advance—a basic principle of solidarity among those who realized that you simply cannot afford to leave anyone behind.

Following the Barrows Hall takeover were rallies, marches, and even another brief sit-in at Campbell Hall. This rush of activity was based on a collective commitment to non-negotiable demands.

It was said (in group meetings and public rallies) in no uncertain terms that the university would either unilaterally recognize these (admittedly humble) demands or it would have to contend with a student-led campaign that was becoming a principled nuisance, a wrench in the works of the university machine. The motto at the time was “no more business as usual.”

It bears remembering that the emergence of the “first” Third World Liberation Front in 1968 was based on the collective recognition that people of color (“oppressed nationalities,” in the parlance of the time) and progressive whites had no choice but to build political solidarity with one another if they intended to sustain a meaningful movement.

Unfortunately, once the hunger strike had crowded out all other forms of struggle, the “updated” version of the Third World Liberation Front paid little if any attention to outreaching, organizing, and conversing among the different elements of the student (as well as faculty and staff) population, who not only had vested interests in the struggle that was being mounted, but who had much to offer in the way of insight, resources and commitment to the notion of a more radically democratic campus.

The political action that condensed into the twLF did not have any definitive starting point or specific agenda. Those who have their ears to the ground will remember hearing about students wanting to take action regarding the release of admissions numbers for students of color in late March and early April. The focus at that point was about access to education, probably connected to the “affirm with action” walkout/teach-in from the fall (Octoer 1998).

Beyond that, students eventually heard about the $300,000 budget cuts in Ethnic Studies and basically opened a can of worms about the slow death of the department.

This crisis of Ethnic Studies was discussed at different points during the graduate student/faculty joint meetings of fall 1997-spring 1998 and, subsequently, during organizing meetings for “Crossing Over,” the strategy session that marked the thirtieth anniversary of the Ethnic Studies program here at Berkeley on April 9th-10th.

Norma Alarcon, professor of Ethnic Studies and Chair of the Women’s Studies Department, during a panel entitled “The Future of Ethnic Studies” (at “Crossing Over”) coined the phrase about the “starvation” of Ethnic Studies, a phrase that students then utilized in formulating the hunger strike strategy.

While this sort of political quotation is important, it should be noted that Professor Alarcon was very clear in her presentation, in her discussions with the authors of this piece and her subsequently released letter to the community, that a piecemeal approach to transforming Ethnic Studies was going to do very little good.

She clearly made the point that something more significant and fundamental needed to happen (i.e. connections with other departments, community groups, etc.) in order to generalize the critical confrontation with the powers-that-be at this place.

As mentioned, this vision was actually present in the early meetings after the Barrows Hall takeover, despite the fact that the issued demands were extremely circumscribed by a narrow focus on budget allocation and FTEs (full-time equivalent faculty positions).

Folks asserted that the demands as such were only the strategic first step in reassessing the institutional agenda of UC Berkeley and holding its administration accountable to a revitalized public (on and off campus).

To that end, the large group of students (and faculty and staff) that had gathered around these issues, for various reasons of course, voted overwhelmingly to support this approach and planned to conduct a series of actions on campus.

However, this grander, more ambitious and more dedicated approach was cast aside. The democratic vote was overturned by a small group, whose rationale for this was not political analysis but the hue and cry: We’re graduating this semester and we want to go out with a “win.” We’re going on this hunger strike despite the democratic vote and you all will just have to follow us into the world with your mobilized support.

Thus we arrived at the tactic of a hunger strike short-term, high intensity, narrowly focused. And in the end, the priority of amnesty for arrested protesters was subordinated to a concern for the meager departmental changes as outlined in the demands, and abbreviated to meet Berdahl’s “standards.”

It seems ironic that as Professor Alarcon cautioned that more proposals (to Berdahl et al) would be ineffective, we ended up moving from non-negotiable “demands” on April 14 (when amnesty was a precondition to a “settlement”) to a joint (twLF/faculty) “proposal” for the chancellor on May 7, a proposal which was substantially based on the chancellor’s compromise offer of four days earlier.

The hunger strike began with an apology (from the hunger strikers themselves—after they had gone on strike!) to the twLF for subverting the democratic decision making process in the group. It ended with a similar apology as the larger group was never consulted after negotiations. Instead, the victory celebration preempted a crucial group discussion.

The good news, however, came in the aftermath of the hunger strike. After a month of open mass meetings, the twLF was able to come to some political consensus, if not around our analysis of the events between the April 14 Barrows Hall takeover and the May 7 end of the hunger strike, then at least over our common vision and articulation of political desire.

To this end we agreed that the sacrifice of seven comrades (those with criminal and university charges still pending, as well as 150 folks with letters of reprimand still in their files), was an unacceptable mistake that had to be rectified.

We drafted a letter to Chancellor Berdahl calling for his immediate dropping of all of the charges and began plans for a series of campaigns and direct action, which would ensure his compliance by the end of the semester—or precipitate the escalation of events in fall 1999. (At the time of this writing the latter has become necessary.)

The second evidence of a political reassessment that grew out of frank debate and soul searching was our drafting of a Mission Statement, which serves two purposes.

One, it makes coherent and translatable the political desire which prompted the militancy and uncompromising mobilization of the Barrows Hall takeover (not to mention that of the initial TWLF of thirty years ago).

Secondly, it provides us with theoretical and ideological direction, to guide and, above all, sustain us in future actions when the temptations of liberal compromise and sophistry seep in to test our mettle.

We would like to close with the Mission Statement’s text in full:

“The third world Liberation Front (twLF) emerges from an understanding of the university as an oppressive institution in its organizational structure and its essential functions. In our view, the university is not confined to the campus, but spreads out to affect nearly every dimension of social and political life locally and globally. It is both produced by and productive of larger forces of injustices.

“Therefore, we begin with a deep commitment to stop the agenda at the University of California through a broad-based collective effort including students, workers (including faculty), prisoners, and community people while recognizing our different degrees of complicity with its power and privilege. This agenda includes but is not limited to the privatization of public spaces, the downsizing of academic departments in the social sciences and humanities, the mass incarceration of poor and people of color, the creation of technocratic managers, the research and development of weapons of mass destruction, and the manipulation of biotechnology and intellectual property rights for corporate interests.

“We are dedicated to exposing and severing the strategic alliances between the university, private industry, the military and the growing police state. Our struggle reflects and is supportive of larger, interdependent struggles against capitalism, white supremacy, patriarchy, heterosexism, ageism, ableism, and disrespect of the essential symbiosis between humans and nature.

“Together in the spirit of our many histories of resistance, we demand critical education (as opposed to mass schooling) that empowers the people and promotes radical social change.”