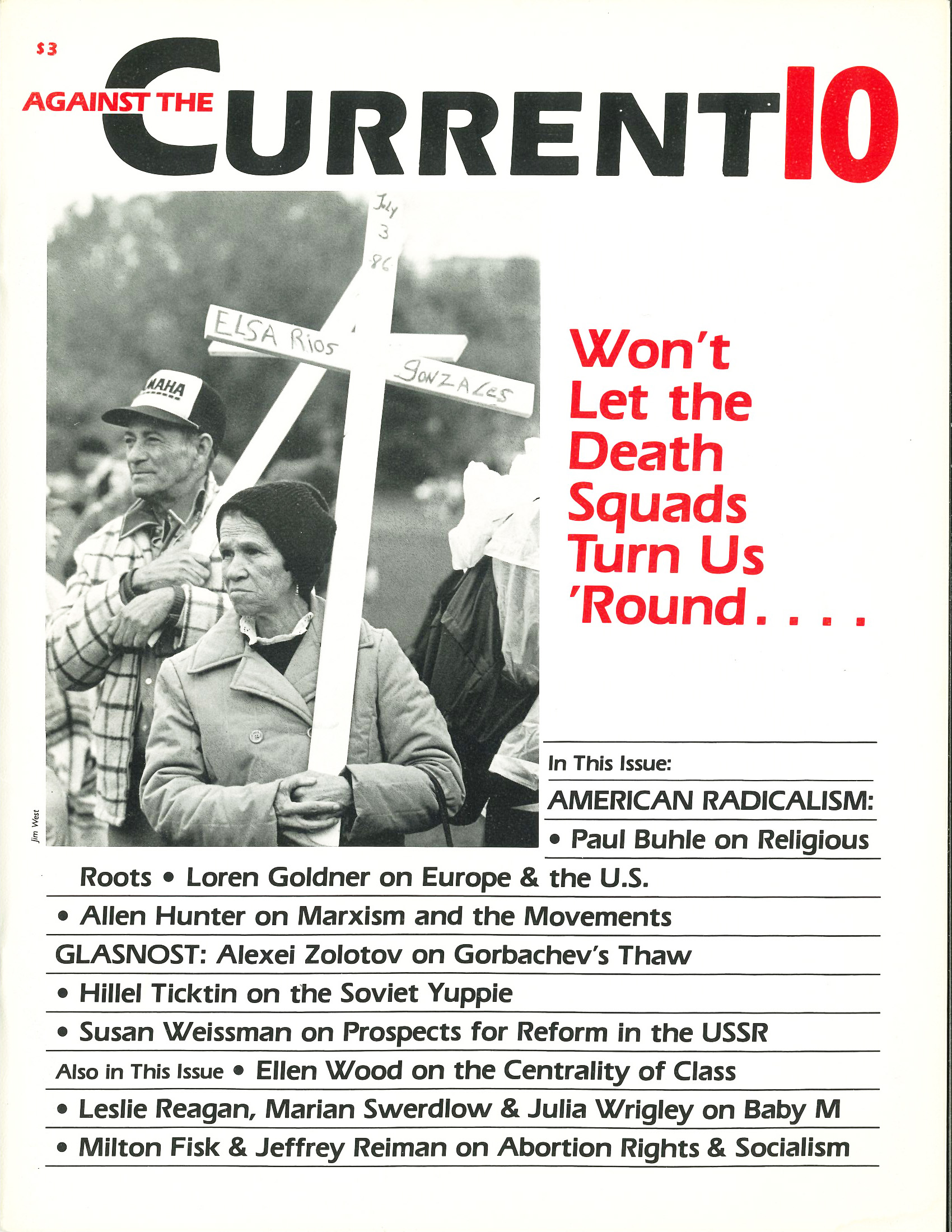 Letter from the Editors

THE SPREAD OF AIDS is one of the Reagan era's most monstrous legacies. Whatever the origins of AIDS, prompt funding for education and research might have contained the disease in its first years. The tight-fistedness of the Administration and Congress in those years makes them responsible for thousands of deaths. The blend of moralism, ignorance and repression that they are now propagating is the best formula to make sure AIDS will haunt and decimate an entire generation....

A NATION-WIDE STRIKE wave by tens of thousands of South Korean workers has brought workers' struggle to the forefront of the mass movement in that country. The struggle first for democracy in the country and then for dignity in the factories shows some of the early signs of a revolutionary situation as the people face fearlessly today the hated government from which yesterday they cringed in terror....

THE CENTRAL AMERICAN community in Los Angeles has been attacked, and threatened with further attacks, by what seems to be the Salvadoran death squad. The violence in Los Angeles coincides with the escalation of military and paramilitary death-squad terrorist activities in El Salvador....

A Strategy for Irish Solidarity

JOE DOHERTY has never been convicted, or even charged with a crime in the U.S. Yet he has spent the past four years in prison in New York City. Why?

Joe Doherty's case represents the latest effort of the United States and Britain implementing the year-old Supplementary Extradition Treaty between the two nations.

Why Class Struggle Is Central

THE QUESTION WE'RE dealing with and let's not forget this-is the centrality, not exclusivity, of class. To the question "is class central?" my answer is that there are two distinct questions involved....

REAGAN'S STUMBLE towards war in the Persian Gulf really requires Kipling to do it justice:

Khomeni has sunk old Reagan's ship,
That was old Reagan's pride.
With a silkworm between the wind and the water,
That left a great hole in her side.
Well Reagan he swore a mighty oath,
And soon made up a plan....

Reflections on American Radicalism, Past & Future

I KNEW WE HAD entered a new period when a handful of Moonies marched around us at a Providence, R.I., Central America rally, chanting not "Go home to Russia!" or "Get a haircut!" but instead, "Down with Liberation Theology!" I had a feeling the era was getting familiar already when I had more meetings to go to-and felt that I should go to -- than any other week in fifteen years. Since then, things have slowed down somewhat. But I recognize the quiet just before a shitstorm strikes.

It's high time to address the new and the familiar in our situation. The Vietnamization of our southern neighbors has dramatically accelerated, with the U.S. internal repercussions already underway. South Africa prepares to explode with worldwide consequences. The domestic Right is making its boldest moves yet, positioning itself to benefit from unrest and a potentially sweeping repression of active dissent....

"Tho' obscured, this is the form of the Angelic land." --William Blake, America

I WOULD LIKE TO endorse the basic perspectives of Paul Buhle's article, yet show how it can be arrived at in terms more familiar to many readers of Against the Current who, like myself, grew up politically within the "immigrant," continental European Marxist tradition.

Ten years ago, even five years ago, I was highly skeptical about the native American radical tradition,...

A Response to Paul Buhle: Limits of Religious Rebellion

PAUL BUHLE'S "Reflections on U.S. Radicalism: Past and Future," radiates optimism in this period of general pessimism and political retreat. His tenacious commitment to a visionary socialism at once democratic and internationalist is complemented by his generous views of diverse social movements and cultural impulses. His unifying, transcendent vision is welcome in a period characterized by fragmentation, retreat, and timidity....

IN ANY STRUGGLE ideas are important; the struggle for abortion rights is no exception. The anti-abortionist op­ position is highly defined ideologically; it manages to keep its ranks solid with the view that the pro-choice camp is indifferent to the value of human life. How can the pro-choice camp best respond on the terrain of moral ideas?

There are two approaches the pro-choice camp might take....

"ABORTION AND SOCIALISM," Milton Fisk sets out to answer the question: "How can the pro-choice camp best respond [to the anti-abortionist opposition] on the terrain of moral ideas?" He aims to articulate a "moral justification for the pro-choice position," which he calls the "group" approach and which he contends is superior to the "liberal" approach of appealing to individual natural rights.

The liberal approach is to be abandoned because it is based on the notion of human beings....

A Rejoinder: The Fallacies of Liberal Rights

MORALITY IS NOT something that comes zooming in out of the blue to control our lives, but is a human institution fashioned to fit human purposes. Where our purpose is the transformation of society, only a morality that allows for social transformation is feasible.

The critical role of morality is then limited by the context of ongoing endeavors....

SOVIET SOCIETY is at last emerging from the post-Khrushchev deep-freeze. The current thaw is proceeding more rapidly than did its predecessor of the 1950's and has indeed already erased some high watermarks of that era.

Cultural developments have been the most dramatic.(1) Boris Pasternak is to be rehabilitated as a great writer of the Soviet tradition, and his "Doctor Zhivago" is to be published after thirty years of banning.(2) The emigre novelist Vladimir Nabokov is to be published for the first time....

AFTER WATCHING Soviet TV fairly steadily over last week, I have learnt what is meant by glasnost. It is the right to express different ways of implementing official policy.

No one expresses a contrary view, no one whosoever....

Who Benefits from Reforms?

SOVIET LEADER Mikhail Gorbachev's glasnost campaign has not only made headlines in the West, but is generating significant changes within the Soviet Union itself, particularly for the opinion shapers: the filmmakers, writers, and journalists.

Films which have been on the shelf for more than fifteen years are being shown; the new head of the Soviet cinematographic union is himself the widower of a once-banned filmmaker. Soviet theatre, static for decades, has come alive and new plays challenge once-sacred cows..../p>

ENCLOSED IS A check for a two-year subscription to Against the Current.

While I strongly agree with Michael Löwy about the need for utopian vision and workers' self-activity as a condition for genuine emancipation ("Marxism and the Utopian Vision," ATC #8, March-April 1987), I want to take friendly exception to his claim that "the Polish events demonstrated that reform of the bureaucratic state is an impossibility."...

FIRST, I'M HAPPY that Justin Schwartz took a two-year subscription to Against the Current and hope many other Marxist scholars will follow his example.

In answer to his friendly criticism I would like to offer a few remarks. I entirely agree that my phrase-"reform of the bureaucratic state is an impossibility"-is wrong. It is obviously an overstatement that does not correspond to historical reality: there have been several reforms of the bureaucratic system, from Khrushchev to Gorbachev, as well as in other post-capitalist societies (Yugoslavia, Hungary, etc.)....

Whose Baby Is It Anyway?

JOHANNA BRENNER AND Bill Resnick's article (ATC #9) on the Baby M case offers welcome thoughts on a tough problem. I don't agree with their conclusion, however, and would like to propose a different way of looking at surrogacy.

While expressing sympathy for Whitehead, Brenner and Resnick support the judge's decision to award custody to the Sterns (the biological father and his wife). They do so on two grounds....

Surrogacy Is a Bad Bargain

THE BABY M soap opera and the rights and wrongs of the case have been hotly debated in saloons and living rooms across the country. In this soap opera, Mary Beth Whitehead has been portrayed as both a bad mother and a bad worker.

From the beginning, she was a bad mother because she provided the use of her uterus and gave up her child for money.....