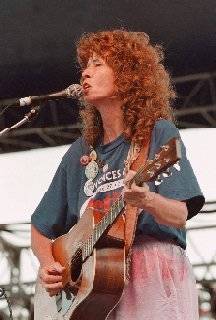 Folksinger-songwriter Anne Feeney, died of Covid on February 3, 2021 at age 69. We are reprinting a tribute from Ellis Boal, another lawyer-folksinger, who met Anne when she showed up to support the Detroit Newspaper Strike years ago.–ATC editors

THE DETROIT NEWSPAPER Strike of the late 1990s electrified the city in a way no labor struggle had since PATCO.

The city has a tradition of militancy.  Media pose as the conscience of capital, so there was a sense of betrayal.  Mid-week meetings of the community strike support coalition numbering up to 300 called for violating the court injunction, sympathy strikes, and a mass action strategy.  The strikers put out their own paper, The Sunday Journal, with as many as 30,000 sold and a press run of 300,000 weekly.

The scab papers’ circulation declined by a third. The corporate owners took over $250 million in losses and missed profits.

Because the papers’ biggest production days were Saturdays for the Sunday edition, strikers and supporters would gather at a UAW hall Saturday evenings, warming up for an all-night picket at the papers’ suburban production plant. Once, to avoid our line, the papers had to land an unlighted helicopter to pick up bundles and get them out for sale.

Unannounced, Anne showed up at the UAW hall one of these chill Saturday nights. She had heard about the vigils and traveled from Pittsburgh. Alone, she took the stage and took command.

I had never heard of her, nor had anyone. But “War On The Workers” knocked me out, as did her “Scab” song. The astonished crowd listened and joined in joyously.

Later, out on the line, she astonished again, by singing all six verses of Solidarity Forever (including my favorite “It is we who plowed the prairies, built the cities where they trade….”).

She allowed me to add “WOTW” to a CD of strike songs I was producing.

Again she returned for a planned strike rally, this time invited. Then in 1997 she sang for ActionMotown97 (pictured).

Later I became music editor for Labor Notes, and organizer of music for the national conferences. Anne attended a couple of these. I came to know she was sometimes difficult to work with. But show her a live mike in front of a waiting crowd and she would step right up. At one of the conferences we had a lunchtime picket against a local employer. Anne stood there on the grass with her guitar inspiring us, having brought her own portable mike and amplifier.

Until Standing Rock I had long thought “This land is our land…” should be an alternative, or perhaps our only, national anthem. But Anne knew the Native American answer, “… but it once was our land.”

Years later she heard I was involved with a nurses’ strike in nothern Michigan where I live now. Unsolicited, she offered to come do a show for the strike. There would have been nothing in it for her. It didn’t work out, but the important thing was she offered.

You can find many remembrances and photos of Anne at “Remembering Anne Feeney” and add your own!