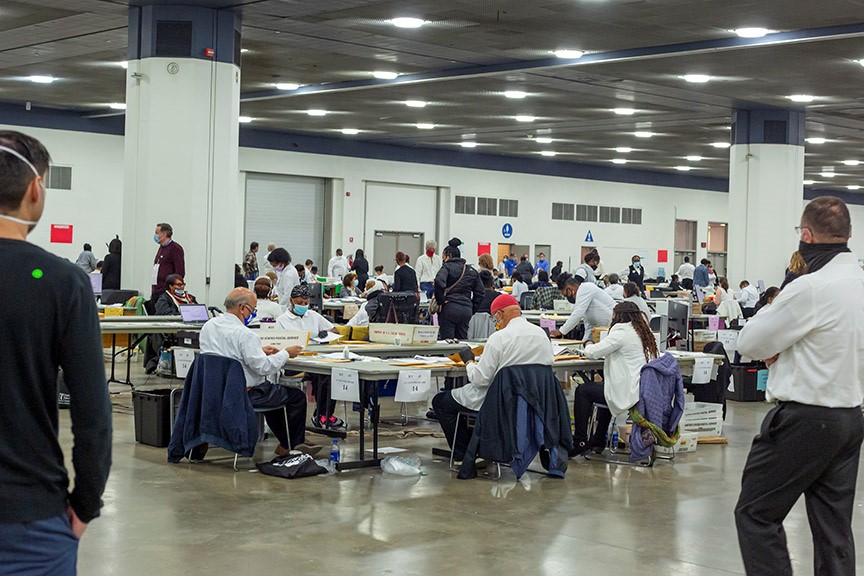 Ballot counting in Detroit, where Trump supporters – and Trump himself – without any evidence, claim “fraud”! jimwestphoto.com

THE ELECTION IS now over except a few recounts, dead-end Trump lawsuits and two Georgia Senate runoffs. Most of America – and the world – is righteously celebrating the end of the Trump-Pence presidency and the specter of another four years of the national and international nightmare.

Thanks to mass early and mail voting turnout by the Democratic base, especially the impressive mobilizations by the African American and parts of the Latino communities, the outcome although closer than expected became clear enough two days later, Thursday, November 5.

The extraordinary (by U.S. standards) 71 percent participation rate – with more than 74 million votes for Biden/Harris and 70 million for Trump/Pence – may be a harbinger of future elections. Both capitalist parties may also be in for some internal strategic battles over their respective failures to win decisive presidential and congressional victories.

With the Saturday, November 7 announcement of Joe Biden’s Electoral College victory, the widely feared Grand Theft Election gambit by Team Trump and rightwing state legislatures appears to fade. The big twit’s disastrous Thursday televised rant, and relatively small although menacing “stop the count” rightwing protests, failed to resonate with most of the Republican leadership and the campaign’s lawsuits fizzled in state courts.

In Michigan, where Republicans have a gerrymandered state legislature majority, an oversight committee is launching an “inquiry” into the state vote count. In some circumstances this might trigger a chaotic chain reaction, but in the present situation it seems vanishingly improbable. By any rational calculation for the Republican Party or U.S. capital, trying to keep Trump in office – after an election he’s lost nationally by more than four million votes – would hardly be worth the risk of utterly shattering the legitimacy of the new rightwing-majority Supreme Court and the core institutions of U.S. bourgeois politics.

What might come next gives little cause for euphoria. First and foremost, the dramatically worsening coronavirus emergency sees daily U.S. cases now topping 100,000 and possibly set to double that horror by early 2021. As dreadful and cynical as his denialism and super-spreading antics have been, as we’ve said before, not even Donald Trump on his own could have screwed up this whole thing so completely. America’s public health infrastructure is a mess decades in the making.

Even if the incoming Biden-Harris administration constructs the most competent pandemic response team, they won’t take office until next January 20 and will confront a likely out-of-control virus, deep structural defects and inequalities in the U.S. medical care system, and probably a deadlocked Congress. Rightwing Republicans, losing the White House but having defeated the Democratic “blue wave” that was anticipated, may be content to leave Biden presiding over an intractable public health emergency and an economy stalled in neutral, if not worse.

The crisis would only become worse if the Supreme Court’s majority overturns the Affordable Care Act, a case to be heard shortly by the full Court, threatening to leave millions more people in the United States without access to health insurance. In that contingency, the Biden administration would have no real choice except to declare a national health emergency and keep the ACA’s provisions in place until Congress passes a viable substitute. That would be clearly within the president’s powers, but would Biden have any political guts for such measures?

It’s pretty much pointless to talk about what Biden and Harris could do to promote a “progressive” agenda (e.g. Medicare for All, sweeping police and criminal justice reform or a Green New Deal) which they clearly don’t support. Biden has explicitly boasted that he defeated advocates of those programs.

While the left by all means needs to continue the fight for all these and more, the reality is that the Democratic Party’s neoliberal-centrist leadership and large donors control the party’s agenda. Furthermore, the state of play in Congress gives them the excuse to avoid anything remotely “radical.”

Accomplishing progressive structural goals requires the kind of break from the Democratic Party that the Green Party, with an openly ecosocialist platform, fought for but was essentially overwhelmed in this hyper-polarized election. Going forward, we hope that differences over the left’s limited tactical options in this election can give way to unity in advancing such a project. (An article of interest, “The Green Socialist Opposition Begins Now.”)

A different matter is how much the incoming Democratic administration will carry out its own promised policies – beginning with reversing literally hundreds of Trump’s executive orders. The Muslim travel ban. The virtual elimination of refugee asylum. Oil drilling in priceless natural wildlife reserves, and massive wipeouts of basic environmental regulations. Sadistic family separations at the border, and terror raids in immigrant communities. Arbitrarily abandoning the Paris climate agreement, inadequate as it is, and the international Iran nuclear accord. The list of outrages to be reversed is almost endless.

In the name of basic decency, the Biden administration should eliminate all the Trump-decreed sanctions that are brutally harming the ordinary people of Iran and Venezuela, without affecting the regimes of those countries at all. Relations with Cuba should resumed and all sanctions lifted. The obscene U.S. relationship with the murderous “strategic ally” Saudi Arabia, including the genocidal war in Yemen, needs to go. And obviously, the vicious extradition proceeding against Julian Assange for revealing U.S. war crimes should end immediately.

Even though all these are basic necessities, we have few expectations for them. As for the real complexities of international politics, the imperialist confrontation with China, and the economic malaise that will confront the new administration, those are for separate discussions.

The defeat of Donald Trump can rightly be viewed as a victory for elementary decency, and for the clear majority of the American people. That means a lot, and we don’t underestimate its importance. The left, however, can hardly regard the return of neoliberal Democratic governance as our own victory. We need to be with the movements as they continue the fights for Black Lives Matter, for preserving reproductive rights against the reactionary assault and saving the future of civilization from environmental collapse.

The welcome defeat of Donald Trump is a setback for white nationalism in this country, but far from a decisive defeat. Most centrally, the left must take its place in rebuilding a U.S. working class movement worthy of the name.

Toward this end, the left needs the most effective politics and organizational forms that we can develop, drawing upon past experiences and contemporary rethinking alike. In this spirit Against the Current continues to advocate construction of a multi-tendency revolutionary socialist regroupment with international ties, and our sponsoring organization Solidarity continues its efforts to be part of the solution.

This is all the more important at a time when U.S. society is so deeply racially polarized, and the working class along with it. Labor’s decline over the past decades, along with the neoliberal Democrats’ cynical abandonment of working class interests, left the vacuum that white racial resentment fills.

Without the revival of the labor movement and politics based on working people’s real interests, the false promises presented by white supremacy and nativist reaction will return with a vengeance. The past four years of Trump must be understood not as a bad dream, but a warning.