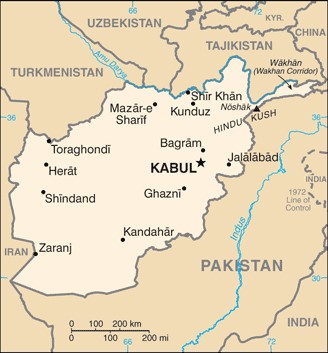 IN LESS THAN a week, the United States-NATO puppet regime in Afghanistan has collapsed, as the militant Taliban march into city after city without resistance. The capital Kabul is now in Taliban hands. President Mohammad Ashraf Ghani has fled the country.

Symbolically, the former Bagram US military base near Kabul was captured by the Taliban. The 350,000-strong Afghani army collapsed. Weapons were turned over to the Taliban. Soldiers and police put on civilian clothes.

It is a total victory for the Taliban.

The US defeat today is the culmination of an unfolding defeat for imperialism that occurred years ago. The US and NATO forces had more than 130,000 troops in the country, after its 2001 invasion. It could not defeat the Taliban.

The decision to finally withdraw was recognition that a military victory was impossible. And there was no stable regime.

The Pentagon is sending in 5000 troops to evacuate citizens. The US embassy has closed and embassy staff shred secret documents. NATO allies are doing the same.

How could this happen so quickly? Why did the defeat of the largest military in the world become inevitable?

In the final year of former US president Donald Trump’s administration, a deal was made with the Taliban for the US to remove its troops from the country if the Taliban agreed not to allow “terrorist” groups to operate on Afghani territory.

The Taliban agreed and demanded the Afghani government resign.

The agreement came after the Taliban agreed two years ago to stop attacking US forces. It focused its war against the Afghani army and police, which was five times larger than the armed militants.

The US still recognised the Ashraf Ghani government as legitimate, but if any proof was needed that the elected government was a puppet of Washington, it was shown by its quick collapse.

The Taliban’s historic support is in southern Afghanistan among the Pushto (Pashtun) ethnic group. Its capital was in Kandahar, where founding leader Mullah Mohammed Omar lived. He died in 2013.

The Afghani people are making clear that the foreign invaders should go, and a stable government is only possible with Afghani forces not beholden to the West.

Despite US military/CIA propaganda, there has been no bloodbath. The Taliban is taking over with agreements with local leaders.

Origins of US intervention

The US first intervened in Afghanistan in the 1980s after the 1978 democratic revolution that brought to power a secular regime whose program was political democracy, land reform, equal rights for women.

That revolutionary government came after the fall of the British-imposed monarch in 1973, and political factional warfare in the new Republic.

The US, through the CIA, sought to bring down that government. In 1979 the Soviet Union sent troops in to back the new regime.

The US and its allies backed the mujahideen peoples force to defeat the urban-based secular government. The mujahideen was made up of different groups, led by landlords that oppressed the peasantry where they ruled.

The regime had little support in the rural countryside where most people lived.

When the Soviets were forced to leave the country in 1989, the mujahideen took power. The Soviet intervention was a disaster.

The Taliban came out of these forces. Its main patron was the Pakistani military intelligence services and it was financed by Saudi Arabia. It used that money to become well armed and defeat competing warlord groups.

It came to power in 1996, after a civil war among factions after the Russian withdrawal. The nationalist Taliban imposed an Islamic regime along the lines of Saudi Arabia’s, where women have few rights.

The US recognised the new Taliban regime, which even had positive ties to some US businesses.

The Taliban allowed al Qaeda and Osama bin Laden to set up operations on its territory.

After the September 11, 2001, attack on US territory, then-President George W Bush invaded Afghanistan, to destroy al Qaeda and bin Laden.

Bush declared the Taliban an “enemy” regime in 2001 and refused to accept its surrender. Its leaders fled to Pakistan.

While the Taliban is not al Qaeda or Islamic State, seeking a new caliphate, its objective is to rule Afghanistan, as it did from 1996?2001.

After its occupation of the country, Washington thought it could “nation build” a country it still does not understand.

The Afghani resistance just had to wait them out. The Taliban knew this would happen.

Biden and the State Department are spinning the collapse as proof that their decision to leave was correct. Biden repeatedly said it was up to the Afghani people to defend their government.

The main victims of the change of regimes will be women and girls, human rights activists and intellectuals. This could be a repeat of what happened after the pro-Soviet government was overthrown by the US-supported mujahideen. That secular government had allowed girls to be educated.

The US did not give a damn then, so long as the “communist” Russian and Ukrainian troops were defeated.

The countries that backed the mujahideen included Saudi Arabia, Egypt and other hard-line Arab rulers.

Women leaders and other pro-democracy supporters face an uncertain future. Many are trying to leave the country or go underground.

Anti-war forces and supporters of Afghani self-determination must tell the truth about the collapse and the imperialist project in Afghanistan and worldwide. It must demand an end to US military bombings and attacks on alleged “terrorists”, as it does in other countries in the region.

The next stage for the democratic forces in Afghanistan is building an independent movement to take on the Taliban and other reactionary forces.