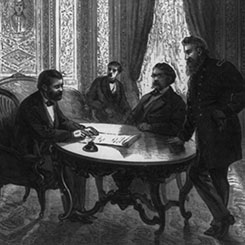 Mississippi Congressman Bennie Thompson filed a federal lawsuit January 16 accusing Donald J. Trump, Rudy Giuliani, the Proud Boys and Oath Keepers of conspiring to incite a violent riot at the U.S. Capitol on January 6, with the goal of preventing Congress from certifying the 2020 presidential election.

The lawsuit alleges that, by preventing Congress from carrying out its official duties, Trump, Giuliani and the hate groups directly violated the 1871 Ku Klux Klan Act.

The NAACP and Thompson, a long-serving and only African American Congressman of Mississippi, filed civil litigation. Thompson, who is chair of the House Homeland Security Committee, filed a complaint in his personal capacity alleging that they all conspired to violate the 1871 Ku Klux Klan Act. The NAACP is representing Thomson in the suit along with the law firm Cohen Milstein Sellers & Toll.

“It should surprise nobody that an anti-Klan statute can be used against the white people who attacked the Capitol, because the Klan itself is just the fairly normal white response to losing political power to a multiracial coalition. Whenever white supremacists feel like they’re losing, some of them resort to violence. The only people who seem surprised by this are other white people who have the privilege of believing that their cousins and friends are “joking” when they share violent memes on Facebook,” wrote Elie Mystal on February 17, on The Nation’s website:

“The adoption of the Thirteenth, Fourteenth, and Fifteenth Amendments to the Constitution extended civil and legal protections to former slaves and prohibited states from disenfranchising voters “on account of race, color, or previous condition of servitude.” Forces in some states were at work, however, to deny Black citizens their legal rights. Members of the Ku Klux Klan, for example, terrorized Black citizens for exercising their right to vote, running for public office, and serving on juries. In response, Congress passed a series of Enforcement Acts in 1870 and 1871 (also known as the Force Acts) to end such violence and empower the president to use military force to protect African Americans.

“In its first effort to counteract such use of violence and Intimidation, Congress passed the Enforcement Act of May 1870, which prohibited groups of people from banding together “or to go in disguise upon the public highways, or upon the premises of another” with the intention of violating citizens’ constitutional rights. Even this legislation did not diminish harassment of Black voters in some areas….

“While these committees were investigating southern attempts to impede Reconstruction, the Senate passed two more Force acts, also known as the Ku Klux Klan acts, designed to enforce the Fourteenth Amendment and the Civil Rights Act of 1866. The Second Force Act, which became law in February 1871, placed administration of national elections under the control of the federal government and empowered federal judges and United States marshals to supervise local polling places. The Third Force Act, dated April 1871, empowered the president to use the armed forces to combat those who conspired to deny equal protection of the laws and to suspend habeas corpus, if necessary, to enforce the act.”

The “Force Acts” it showed an understanding that only military force could enforce the freedom of the former slaves and grant them rights without fear of retaliation by white extremists. The Republicans, then a party of abolition and genuine civil rights, used the military for that purpose backed up by new laws.

The KKK, formed in 1865, engaged in terrorist raids against African Americans and white Republicans at night, employing intimidation, destruction of property, assault, and murder to achieve its aims and influence upcoming elections.

In a few Southern states, Republicans organized militia units to break up the Klan. In 1871, passage of the Ku Klux Act led to nine South Carolina counties being placed under martial law and thousands of arrests.

Six years later most whites in the North and the Republican Party gave up. In 1877 a “Great (Betrayal) Compromise” was made between the Republicans and Democrats to remove all Union forces from the South.

White terror became the de facto law of the land. Elected Black officials were removed from office and gains won after the Civil War in the Constitution were made moot.

In 1882, the U.S. Supreme Court declared the Ku Klux Act unconstitutional. By that time, the Reconstruction Era had been defeated, and much of the KKK had faded away as its leaders became officials of the Democratic Party and local governments and police.

Legal “Jim Crow” segregation became widespread. Lynchings of Blacks without consequences became “normal.” Northern Blacks were put in urban ghettos and could not live or travel to suburbs and other areas without fear.

The idea of using the 1871 law during decades of legal segregation was seen as a waste of resources. The fact that the NAACP sees that law as a weapon today shows the impact of the Black lives matter struggle, even as institutional racism remains strong and growing stronger under the Trump and Republican Party.

The Republican Party under Trump is racist and seeks to go back to the time where domestic terrorist groups rule as they did after the defeat of Reconstruction.

The aim of the far right is to reverse the victories won after the 1960s civil rights revolution beginning with the elimination of voting rights. Since the November presidential elections Republicans have proposed over 100 laws in state legislatures to limit the voting rights of Blacks and other minorities.

Trump’s acquittal of the incitement to insurrection by the Senate has led him and his supporters to go after conservative Republicans who voted to convict. Like all cult and mob bosses, Trump expects total loyalty by “bending the knee.”

The Biden administration and Democrats for the most part stand quiet in fighting Trumpism. They hope old guard Republicans will do so or Trump simply fades away.

African Americans because of history know this will not happen without fighting back legally and by protests in the streets against Trumpism and anti-Black violence.

The NAACP lawsuit is one weapon to do so. It aims to put pressure on the government and courts to act against Trump and his right-wing base.

The NAACP case may be a long shot but combined with the movement of Black lives that has been demonized by the far-right media and Trump, success is possible.