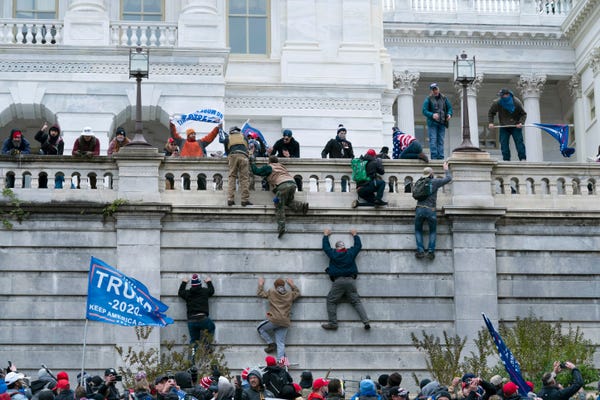 What if Black insurrectionists said: “We’re taking over the Capitol to end racism”?

The question answers itself. African Americans would have been arrested at their homes, and if they made it to the Capitol would have been met by armed police and National Guard units. Blood would have flowed on the streets even without violence from the protesters.

It is the only way to understand what happened on January 6 and how the state has responded to white insurrectionists. It is the only way to see why, three days before Donald Trump’s mob arrived at the mostly Black city of Washington DC, authorities were told to prepare for what occurred and did nothing. The blood is not only Trump’s hands but on the hands of top law enforcement officials and Republican politicians.

Blacks instinctively understand this, which is why their reaction to the white supremacist president was different than for most whites.

African Americans, analysts and academics expected the soft treatment that the white rioters received. When newly-elected Black woman Congressperson Cori Bush, a street activist and nurse from St Louis, condemned white supremacy, she was booed by many white Republican members.

The House adopted a single article of impeachment on January 13, voting 232 to 197 to charge Trump with “inciting violence against the government of the United States”.

The 100-member Senate will decide by a two-thirds majority if Trump should be convicted, and by majority vote on any other penalty such as banning him for life from public office. That trial will likely happen in the coming weeks.

The decision, while significant, has not brought calm or confidence that the white domestic terrorist threat is winding down or is in retreat. Most of the invaders saw the event as a “victory” against the government and planned new threats in all 50 states to impose Trump’s permanent rule.

The host of white-supremacist You Tube show America First declared at a rally after the November elections: “Our Founding Fathers would get in the streets, and they would take this country back, by force if necessary. And that is what we must be prepared to do.”

Far-right and white nationalist sites were planning to carry out that “take back America” deed. Establishment Republican groups supported the effort with money and calls for action.

For tactical reasons, these groups called off armed protests planned in state capitals on January 17 because of strong state police and National Guard presence. In Washington, DC, 25,000 troops will guard the Biden inauguration on January 20 — many times more than deployed in Afghanistan and Iraq.

African Americans, however, do not feel safe from the new white extremist climate of domestic terror. They are the primary targets of the “Make America White Again” thugs. They are the ones most concerned about what lies ahead under a Democratic Party presidency.

In the days after the white nationalist, pro-Trump, insurrectionist failed coup attempt, the reactions from African Americans was deep concern and in some cases fear about the future.

Dahleen Glanton wrote in the Chicago Tribune: “There is one thing on which most of us can agree regarding the insurrection. White rioters were treated differently than African Americans. Black men — and women — likely would have been shot down for taking over this sacred building, the preeminent symbol of American democracy.

“But white people, for the most part, were allowed to roam freely. When one of the rioters was done breaking the law, an officer held her arm and assisted her down the Capitol steps….

“A caste system allows such a miscarriage of justice. It is not always intentional. It is simply inherent and most importantly, invisible. According to [Isabel] Wilkerson, its very invisibility is what gives it power and longevity.

“Perhaps the most unseemly reward granted to those at the top of the hierarchy is entitlement. The caste structure sustains it and everyone, including some at the bottom, accepts it and sometimes, seemingly inexplicably, helps it to thrive.”

Police, Veterans and Others

Trump urged his supporters to come to the Capitol and urged them to march to it. It was a call for insurrection.

It turns out that the thousands of white thugs who took over the Capitol included police, military and local elected officials. Yet none were arrested at the scene. They were escorted by Capitol police out of the building. No handcuffs. No name taking. Nothing.

Three days before the riots, the Capitol police’s own intelligence unit said white supremacists were coming to the Capitol with guns and military weapons to target and kill certain House and Senate members, as well as Vice President Pence.

The police and the White House declined the request for National Guard help. They were concerned about the optics of police facing off against Trump marchers.

Six months earlier, at Black Live Matters protests, the police and National Guard came out for war against peaceful demonstrators.

Although an Article of Impeachment was approved by the Congress one week after coup attempt, 197 Republicans voted against it.

Those on the left who say that the coup attempt was not that significant, because the military did not lead it, miss the dynamics of race and demographic changes in the country. It is a misjudgment to focus now on the new Biden administration, disregarding what has been revealed by January 6.

If the white nationalists retake full power, white skin will protect most whites, whatever their political views. This is what happened in the Jim Crow South. African Americans of all classes lost their rights and were driven underground or into exile (known as the Great Northward Migration).

While Blacks were excited by the first African American president elected in 2008, and the first Black woman vice president in 2020, the white backlash elected Trump.

An historical lesson, not far from African Americans’ memory, is the Radical Reconstruction, which only lasted 12 years after the Civil War.

Blacks were elected to office in the former slave-holding South. By the end of the 1800s, all gains were wiped out. Racist extralegal gangs, such as the White Citizen Councils and Ku Klux Klan murdered and lynched thousands of Blacks.

Although the 13th, 14th and 15th Amendments to the constitution gave freed slaves citizenship and voting rights, it was up to the states to implement these rights.

The defeated slaveholders took back power after the 1877 Great Compromise that removed Union troops from the South. The white power structure in the North did not care anymore. The victims were the former slaves. (Indigenous peoples had already suffered genocide by white settlers.)

Can history repeat? Fascism is built on big lies and terror, which Trump is known for today. His supporters strongly believe him.

Keeanga Yamahtta Taylor is an assistant professor in the Department of African American Studies at Princeton University, and author of Race for Profit: How Banks and the Real Estate Industry Undermined Black Homeownership.

She told NewPolitics: “So, capitalism divides people along the lines of the invented category of race. And all these categories are invented — religion, nationality, gender, sexual orientation. These are all bases upon which people had been divided in the United States.

“It happens along the lines of race, but you know, there’s the example that Marx himself used about Ireland and England, where you can have just as vicious caricatures and demonisation of people who look exactly like you, and thus you are forced to find some other fault line to divide people along. And so there it’s religion.”

Race has always been the underbelly and driver of the capitalist system in the US. It is how the wealthy have ruled and convinced working class whites to back a state that primarily serves the capitalist class.

White power is the continuity of the system. Blacks and others have fought it as a minority. Whites, except a progressive minority that has grown as the Black Lives Matter movement shows, have gone along with the pro- white nationalist majority.

Recognising January 6 for what it was, and that it marks the new stage, is crucial to building a movement to defend BLM and the working class.

The bottom line is: Black skin means oppression. We are treated as inferior people and second-class citizens. People with white skin privilege do not fear the cops. They see them as allies. A rioter at the Capitol told one cop: “You’re treating me like a Black.”

National oppression of African Americans, rooted in structural racist institutions, is the touchstone policy for American ruling class rule. There can never be full freedom for the white working class unless this fact is understood.

There can be no compromises with pro-Trump forces. Future workers’ unity is only possible with fully enforceable justice.