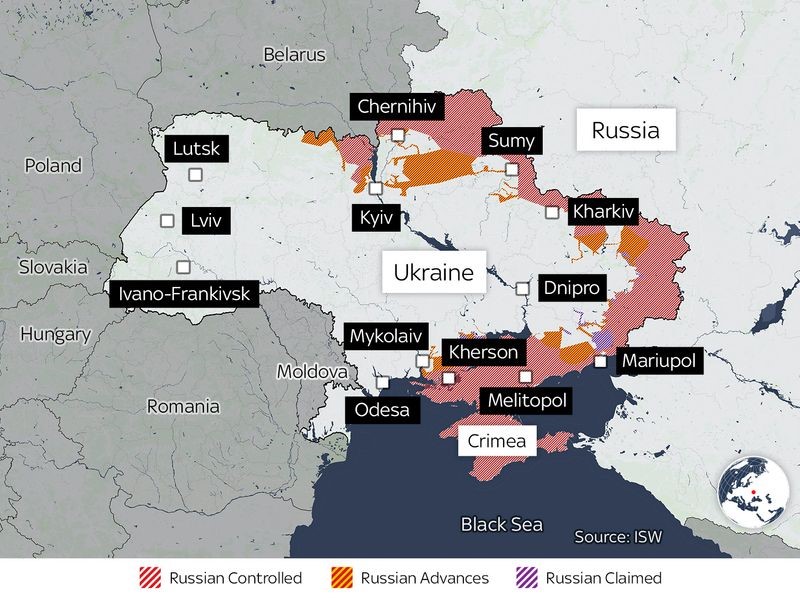 FOUR WEEKS INTO the invasion of Ukraine the advance of Russia’s ground forces has been halted by a determined resistance. Russia’s air force has been unable to take control of the airspace over Ukraine. Ukraine’s air force is still attacking Russian planes and helicopters and its ground troops are targeting them with surface to air missiles.

Russia originally intended to make a swift assault, apply overwhelming force that encountered little resistance and resulted in minimal damage to the civilian population. Russia’s leaders thought that would then allow them to install a government in Kyiv of their own choosing, one that could gain begrudging popular acceptance over time. However, practically all its expert analysis and expectations have proved wrong: no submission or surrender by the Ukrainians, no crowds bearing bread and salt to greet them, and the outbreak of anti-war protest in Russia.

Russia’s armed forces have been in the field for a month, many of them subsisting on dry food rations and water. In Kyiv oblast soldiers have been ransacking villagers’ homes, demanding hot food and samohonka (moonshine) to keep them warm. They now face difficulties getting fuel, munitions and food to their troops as the war drags on. The Armed Forces of Ukraine (AFU) claimed on 22 March that Russia had three days of ammunition and food supplies in reserve for their forces across the Ukrainian fronts. They appear unable to resupply them with fuel as expected from installed pipelines because so many of them have been damaged; they must resort instead to deliveries by road tankers.

They also face problems of low morale and inadequate military training of their soldiers. Some are refusing to fight, surrendering or deserting after little or no engagement with their enemy. On 20 March the newspaper Komsomolskaia Pravda cited a Russian Ministry of Foreign Affairs official admitting that 9,861 Russian soldiers had been killed in action and 16,153 were wounded. According to Eliot Cohen writing in The Atlantic, some 30,000 Russian personnel, or double that number, have been killed, wounded, have surrendered or disappeared, a rate of 1,000 a day. This suggests that Russia has already lost 15% of its original invading army. At least three top commanders have been killed in action and Putin has arrested or fired eight of his key intelligence officers for misleading him about what his army should expect in Ukraine.

Russia deployed Chechen mercenaries at the beginning of the campaign. On 28 February Magomed Tushayev, commander of the crack Kadyrov legion, was killed on the outskirts of Kyiv. Chechens are now fighting on both sides. There have been reports in the press that Russia may deploy mercenaries from Syria and the Central African Republic. It is difficult to see how such forces could be integrated into regular Russian army formations or engaged in coordinated action with them.

Taken together, these unexpected difficulties for the Russian armed forces help explain why they are now attacking civilians, destroying their homes, cultural monuments, civic institutions and public utilities, and why they attack them mainly from the sky rather than engage Ukrainian soldiers on the ground. Once they have advanced close enough to a large town or city the Russians encircle it and try to cut off or destroy its inhabitants’ access to food, water, heat, medicines and escape routes. Then they focus on repelling Ukrainian forces who are trying to break the encirclement. This strategy is designed to sow panic, fear and alienation from their own central and local governments that are seemingly unable to free them from the grip of siege.

Some analysts see in this new approach a repetition of the destruction of Syria by Assad and his Russian allies. Such a destructive and cruel campaign as unleashed in Ukraine generates intense hatred for the invading forces. Where they have actually captured town centres and tried to establish a functioning civil administration of their own, the Russians face a near universal refusal of the residents to collaborate or co-operate with them.

On 12 March Russian soldiers kidnapped Ivan Fyodorov, 33-year-old mayor of Melitopol, an ethnic Russian governing a 95% Russian speaking city. They took him to Donetsk where he was arraigned on charges of terrorism. Melitopol residents responded with unarmed street protests, demanding Fyodorov’s release and return to them. Verkhovna Rada, the Ukrainian parliament, adopted a law on 24 March making co-operation with a foreign power punishable by 10-12 years’ imprisonment.

Ukraine’s successful resistance, Russia’s subsequent change in military strategy and its failure to extract any notable surrender, desertion or collaboration by Ukrainian civilians or soldiers led some European politicians and quite a few more analysts to conclude that Russia has already lost this war. Ukrainian mass media and social media draw the same conclusion, vowing defiance, continuous resistance and readiness to destroy the invaders.

In their daily report on 21 March the Armed Forces of Ukraine expressed cautious optimism that they have prevented Russia’s ground forces from breaking into Ukraine’s largest cities. Their optimism may be premature as cities close to the border with Russia like Kharkiv and Chernihiv or those on the coast like Mariupol and Melitopol are facing such relentless bombardment that they could be destroyed altogether before their remaining inhabitants can escape or surrender. Mariupol now presents everyone with a demonstration of how far Putin is prepared to go to achieve his “victory”. Zerkalo tyzhnia, the respected Kyiv newspaper, reported on 24 March that phosphorous bombs were dropped on Luhansk oblast that day. Phosphorous is banned as a weapon under international law but has been used since World War One, most recently by the Turkish army in 2019 against Kurdish fighters for independence.

Resorting to still more cruel and inhumane methods of warfare is Putin’s way of denying that Russia has suffered any military defeat. He will continue to make war by more terrifying means because now he wants to make Ukraine pay for his own humiliation and shame as a war criminal. He will go on until he is brought down.