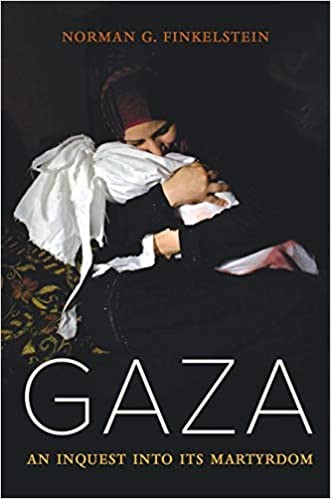 [This review was written and initially posted in 2018 on the Solidarity website. We present it here because Norman Finkelstein’s book, Gaza. An Inquest into Its Martyrdom (University of California Press, 2018). remains absolutely essential for understanding the repeated destruction of Gaza, its society and its population. As of this moment – May 18, 2021 — the United States plays the same role it has always done: calling for “restoring calm” while blocking any meaningful UN Security Council cease-fire resolution until Israel signals its willingness to suspend the current military round. Here is a current video interview with Norman Finkelstein on the present mass murder of Gaza.]

NORMAN FINKELSTEIN’s LIFETIME of scholar-activism includes a long record of skewering highly acclaimed pundits and propagandists of the “pro-Israel” and media establishments. His first target was the fraudulent “demographic study” of Mandate Palestine by Joan Peters, purporting that the Arab population were newcomers attracted by Zionist economic development. Finkelstein’s demonstration of this fakery was published in his Image and Reality of the Israel-Palestine Conflict.

He went on to take apart Daniel Jonah Goldhagen’s Hitler’s Willing Executioners (see A Nation on Trial, by Finkelstein and Ruth Bettina Bern), the pompous hypocrisy of Elie Wiesel among others in The Holocaust Industry, Alan Dershowitz (Beyond Chutzpah: On the Misuse of Anti-Semitism and the Abuse of History, a book whose publication by University of California Press Dershowitz denied attempting to suppress), and the “liberal” star Israeli journalist Ari Shavit (Old Wine, Broken Bottle: Ari Shavit’s Promised Land).

In response to these powerful indictments, Zionist organizations exerted extreme pressure on DePaul University resulting in the termination of his academic appointment there in 2007. Substantially excluded from academia since, Finkelstein has made his living as an independent scholar and lecturer.

In his newly published Gaza. An Inquest into its Martyrdom, Finkelstein extends some of his previous work including Method and Madness: The Hidden Story of Israel’s Assaults on Gaza; “This Time We Went Too Far:” Truth and Consequences of the Gaza Invasion; and Knowing Too Much. Why the American Jewish Romance With Israel is Coming to an End.

As he states at the outset: “This book is not about Gaza. It is about what has been done to Gaza” (emphasis original). It’s deliberately modeled, he writes, after the 19th century “searing requiem” of Helen Hunt Jackson, A Century of Dishonor, which “chronicled the destruction of the Native American population by conscious, willful government policy.” If that work was long ignored and then discovered, Finkelstein hopes that what’s happening to Gaza will be known, hopefully sooner than later.

Finkelstein was not in a position to conduct field research in Gaza, nor for that matter inside Israel, as his body of critical work has attained the distinction of getting him barred from entering the self-described “Jewish state” and “only democracy in the Middle East.” As in much of his previous research, he digs into the details of on-the-ground reporting, human rights records and available data, contrasting these with official government and elite pronouncements to reveal their cynical lying character.

The reader must be forewarned that getting through this work is not easy. The writing is entirely direct and clear, but the reality is that Gaza by official United Nations accounts is rapidly becoming “uninhabitable” with the collapse of potable water and basic sanitation services. What meager coverage Gaza used to receive in mainstream media has been sidelined by the colossal catastrophes unfolding in Syria, South Sudan, Yemen (itself woefully under-reported) and the mass expulsion of the Burmese Rohingya people – and of course, by the convenient opportunity to cover up the fact that the Israeli state is the perpetrator of Gaza’s misery. To be sure, none of these horrors receive adequate attention within the small and shrinking space budgeted to global news by the corporate infotainment media.

Mostly, Gaza gets into the news these days when Israel, asserting “the right to defend itself,” launches a raid, a bombing run or full-scale assault. Taking two cases,

The reason for the 2014 carnage? It was “yet another reckless display of Hamas pragmatism,” in which “the Islamic movement and its secular Palestinian rival Fatah formed a ‘consensus government.’” That move posed the unacceptable (to Israel) threat of eventual European and American “diplomatic engagement with Palestinian leaders on a trio of pre-conditions: recognition of Israel, renunciation of violence, and recognition of past agreements.” For the crime of their rulers seeking a potential pathway to peace, the people of Gaza paid another horrific price.

Finkelstein goes beyond these facts, and the absurd disparities between mass death and destruction in Gaza and the tiny numbers of Israeli military and civilian casualties, to dig into the hard truths of western government, media and even human rights organizational bias. Thus, he devotes closely argued and detailed chapters to “betrayals” in the reports issued by the respected Amnesty International and United Nations Human Rights Council (UNHRC).

In a lengthy exchange with Amnesty, Finkelstein poses the question: “Did Israel primarily set out to target Gaza’s civilian population or legitimate military objectives during Operation Protective Edge?” (emphasis in the original). His conclusion: “Whereas Amnesty’s factual evidence overwhelmingly affirmed the former, its legal analysis of this evidence consistently presumed the latter. In other words, its legal analysis repeatedly contradicted its own evidentiary findings and effectively exonerated Israel of the most explosive charge leveled against it.”

As for the UNHRC report, “it did chronicle, often in harrowing detail, the horrors that Israel inflicted on Gaza. However, it then proceeded to render legal analyses that methodically and, in many instances, comically buffered the gravity of Israel’s crimes (and thereby) conveyed a wholly misleading, distorted picture of what happened in Gaza.”

A careful reading of these chapters gives important insight into how human rights reporting is constrained and politicized, if not in the fact-gathering stage on the ground then in the interpretive conclusions drawn in executive offices. Further, drawing from some of his previous work, Finkelstein recounts the story of judge Richard Goldstone’s UN report on violations of international law in Israel’s Operation Cast Lead (chapter 5, “A Zionist Bears Witness”) followed by Goldstone’s shocking ethical collapse under Zionist pressure (chapter 6, “The Star Witness Recants”).

Finkelstein is painfully aware that the people of Gaza and the rest of occupied Palestine have few if any strategic allies in global halls of power today. But his concluding hope, expressed here and elsewhere, is that a massive Palestinian resistance using nonviolent but defiant Gandhian methods of struggle might “draw from huge reservoirs of international public support, including in recent years wide swaths of Jewish opinion estranged from Israel’s rightward lurch and leap into the moral abyss.”

Again, fair warning: While Norman Finkelstein’s exposures of Joan Peters, Daniel Goldhagen, Elie Wiesel, Alan Dershowitz, Ari Shavit and others have had their humorous and delightfully entertaining moments, none of that is to be found in this “inquest into the martyrdom” of a whole people. This is not the kind of book you want to read. But you really, really need to.