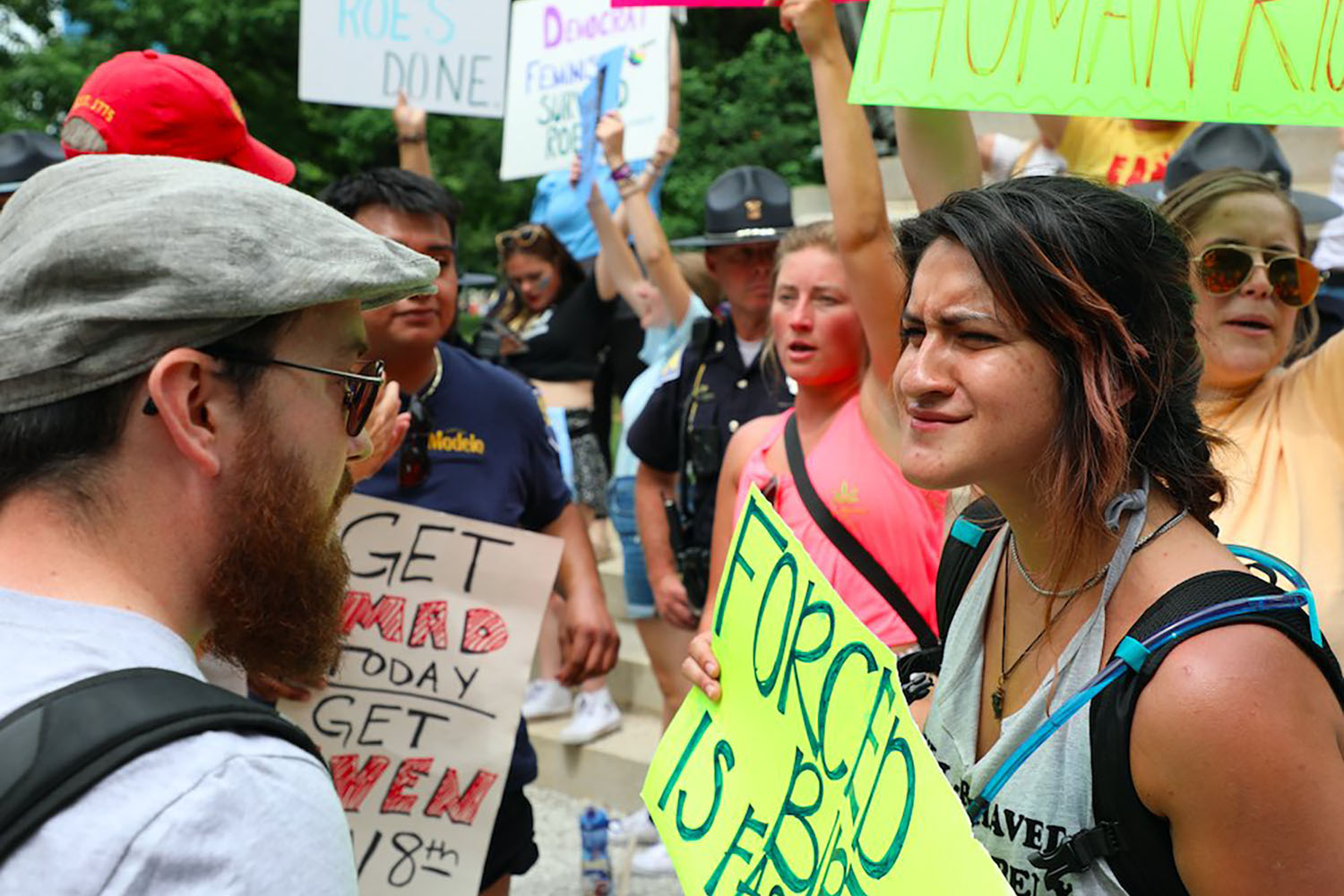 I GREW UP as the effect of a near-total abortion ban. In the 1970s, Communist Romania under Nicolae Ceausescu briefly experienced a bumper crop of children like me, who came about because, starting in 1967, women could have legal abortions only after raising five children into adulthood.

Most of my friends were single children or had at most one sibling. Contraception of any kind was either unavailable or of poor quality (especially condoms). In rural areas, where more than 50% of the population lived, abortion was de facto the only means of controlling fertility long before the Communist takeover and remained so throughout the period of the ban.

Nobody talked about sex as a normal component of our humanity. Sex education was relegated to the realm of obfuscations and double-entendres. Even among loving heterosexual couples, sex was a source of fear for women and anxiety for men.

The justification for the restrictive abortion legislation was the fear that the decline in birth rates would diminish the potential for growth of the labor force. Modernization and productivism demanded more people working to build the workers’ paradise.

While women had come to be seen as necessary participants in the labor force, their reproductive capacity rendered them a particular set of workers who also needed to engage in reproductive labor.

Legislation that provided paid maternity leaves up to two years and a growing network of state subsidized creches and kindergartens reflected this outlook. But women ended up performing a double workday, with little change in men’s behavior in regard to parenting and household unpaid work.

The abortion ban failed to accomplish the pronatalist goal that had anchored it. The fertility rate went up for a few years and then back down. By 1983, the birth rate had gone down to pre-abortion ban levels.

No research that can be trusted was undertaken to understand this vexing outcome. But I speculate that illegal abortions and a lessening of sexual intercourse were the root causes. This explanation points to women as willful agents of their own reproductive potential and to the society wide consequences of an abortion ban.

Significantly, the quality of women’s lives went down significantly during that period: “by 1989, Romania had the highest recorded maternal mortality ratio in Europe (170 maternal deaths per 100,000 live births), 87% of which were attributed to abortion complications.”

In this context doctors, prosecutors and law enforcement, professions dominated by men, became closely entangled with survival. Surviving a regime that forced you to criminalize your wife and daughter’s sexuality. Managing your love life and familial ties to protect those very women from the brutal consequences of their love for you or your son-in-law.

Would a prosecutor be willing to send to jail the doctor who helped their daughter get an abortion? Would a policeman arrest the person who might help their wife get her next abortion? There are stories of both undermining the enforcement of the law as well as manipulative use of one’s power in order to protect one’s own women, but turn a blind eye to others, or worse.

Margaret Atwood’s dystopian novel, The Handmaid’s Tale is a faint echo of the reality I and millions of other women lived for two decades.

From Romania to Indiana

The trauma of those decades of treating people with uteruses as objects of biopolitical control has continued to affect Romanian society — so much so that arguments about the beginning of life at conception and the notion that a fetus is a person do not hold water even with a population that has become more and more religious in word and practice, during the intervening period.

As I watched first the Dobbs v. Jackson SCOTUS decision and more recently the debates over and passing of the SB1 abortion-ban in Indiana, my initial disbelief turned into anger and quickly into the realization that a low-grade biological war has started in the United States.

This war posits those of us with a uterus as persons with lesser rights, because a small minority of dedicated religious radicals have decided that their version of what a person is should prevail over any other version of personhood.

In Romania the arguments were about purposing cisfemale bodies for the benefit of the proletariat, within a larger context of understanding rights as always connected to needs of state and not to any definition of personal autonomy.

In Indiana, the arguments have been about the criminal nature of a medical procedure because a subgroup of evangelical Christians believe not only that a person begins to exist once a fertilized egg comes into being in a uterus, but also that such a belief vacates all other possible scientific or religious concepts of personhood.

The separation of church and state is, in fact, the underlying problem for these individuals. And that makes the SB1 abortion ban in Indiana EVERYONE’s problem, not the problem of just people with uteruses who are premenopausal.

The abortion ban solves no social problems that most of the electorate actually understands as such. Forced births have consequences that Republican state legislators have been unwilling to name or confront: while the reproductive labor of women is normalized as necessary to support the growth of a fetus, child raising is relegated to the realm of private responsibility that the state needs to police but has no obligation to actually support.

The Republican legislative supermajority seems just as content with the duplicitous notion that the well-being of that newborn and their mother is no responsibility of the state. No testimony from those touting the personhood of a fetus (Republican legislators and evangelical testimonies from citizens) acknowledged that women need to work to pay for the cost of raising a child.

The Indiana legislature was silent on reproductive and caretaking work, under the assumption that both are the private responsibility of the mother, even as the state is to control the same private responsibility during pregnancy. No maternity leaves beyond the unpaid 90-day FMLA were contemplated by the legislature. No extra funds from the federal relief package for better pre- and neonatal care, despite Indiana’s abominable rate of being third highest in the nation in maternal mortality rate. No support for daycare.

Hidden in the silences of the new forced-birth bill are assumptions about women’s function in society. Women as workers is not what frames how Republican legislators imagine pregnancy and parenting.

Even though hundreds of employers signed an open letter opposing SB1 based on how it would affect women’s participation in the workforce, the legislature was unimpressed with those concerns. So how are women to take care of the rent, utilities, feed their kids, clothe them, and pay for medical bills?

There is another obvious hidden assumption here: that all women should be in heterosexual marriages where, just as in the 19th century version of white womanhood, they would be staying at home and raising kids, while their husbands would be out in the world working.

The absurdity of this scenario flies in the face of all facts about women’s participation in the economy and trends in terms of marriage. More and more women are working fulltime, or even more than one job. Fewer people are getting married. More women are becoming economic heads of household, both as single parents and as a part of a couple.

These social trends have developed out of longer structural changes and have generated an enhanced quality of life for women overall. Education, the shift of the economy away from manufacturing and towards services, and contraceptive technologies have all facilitated women’s higher levels of employment and away from the norms of family formation that featured the traditional male as breadwinner.

In fact, at this point the only category of persons who still overwhelmingly thinks that the nuclear family with the male breadwinner should be the social norm are married white men ages 39-65, who make up a minority of people living in the United States. But this category also happens to be hugely over-represented in politics, and especially in the Republican supermajority of the Indiana legislature.

What will Indiana look like five years from now, if this legislation remains in force without any additional measures to mitigate the economic impact of the consequences I’ve mentioned above?

As an educator at the largest public university in Indiana, I can point towards some likely outcomes. The gender make-up of the undergraduate population is currently tilting towards more female students, and that trend will end. Only parents who cannot afford to send their daughters to Illinois or Michigan, meaning those with fewer economic means and likely less white, will continue to send them to institutions in Indiana.

The large numbers of out-of-state students at Indiana University, for instance, who have hailed especially from the east coast, Illinois and California, are likely to become less female. What sane parent would send their daughter to Indiana University, a party school, for four years of “college experience” when they could send her to a state where abortion is legal?

Graduate students, who have become somewhat more diverse in terms of gender in the past 20 years, will likely become more cismale as prospective female graduate students seek states which respect women’s reproductive rights. Moreover, some of the most promising candidates, whatever gender and other demographic they may be, will have an additional reason to choose another program in a state where all individuals enjoy the same rights.

It may be that some programs will continue to thrive regardless of this trend. But medicine will not be one of them. The dire consequences of that trend are already visible.

Nursing and medical students have been on the frontlines of opposing SB1. A survey of the IU School of Medicine fourth year interns reveals that 85% of them intend to leave the state after graduation now that SB1 has passed.

Indiana already has 27% of its counties designated as health care deserts. That percentage is likely to increase in the future.

Indiana University has made great efforts to recruit a more diverse faculty, but it has a dismal record of retaining them. The new legislation creates a structural problem that is particularly thorny for female faculty. Women ages 25-45, at the peak of their fertility years, will have to consider the advantages of employment at Indiana University against the possibility they will have to deal with unexpected/unwanted pregnancies.

Given the expectations of high academic productivity within a set number of years at the very beginning of that period as a condition for a longterm contract, the abortion ban generates added risks that one might not want to take, especially if other employment opportunities exist. In short, we are likely to see a decrease in the number of female faculty in all programs.

For those affected by the abortion ban who do continue to work or study at Indiana University, added stress factors and thus mental health problems will be a likely outcome. Without additional resources in that area, women will be forced to shoulder those problems either on their own or through informal networks of support, just as they had to shoulder the COVID crisis in the past two years as mothers of children who were participating in school activities from home.

The level of satisfaction among female faculty is already substantially lower than that of male faculty; without mitigating measures to counter the trend into the future, it will go down.

While the term “social justice” has somewhat fallen out of fashion, “social injustice” seems like a fitting term for what is happening in Indiana after the passage of SB1. Without a massive effort to call out legislators in the way that electorate turned out in Kansas, the current injustices will only grow and hurt our well-being as a society.