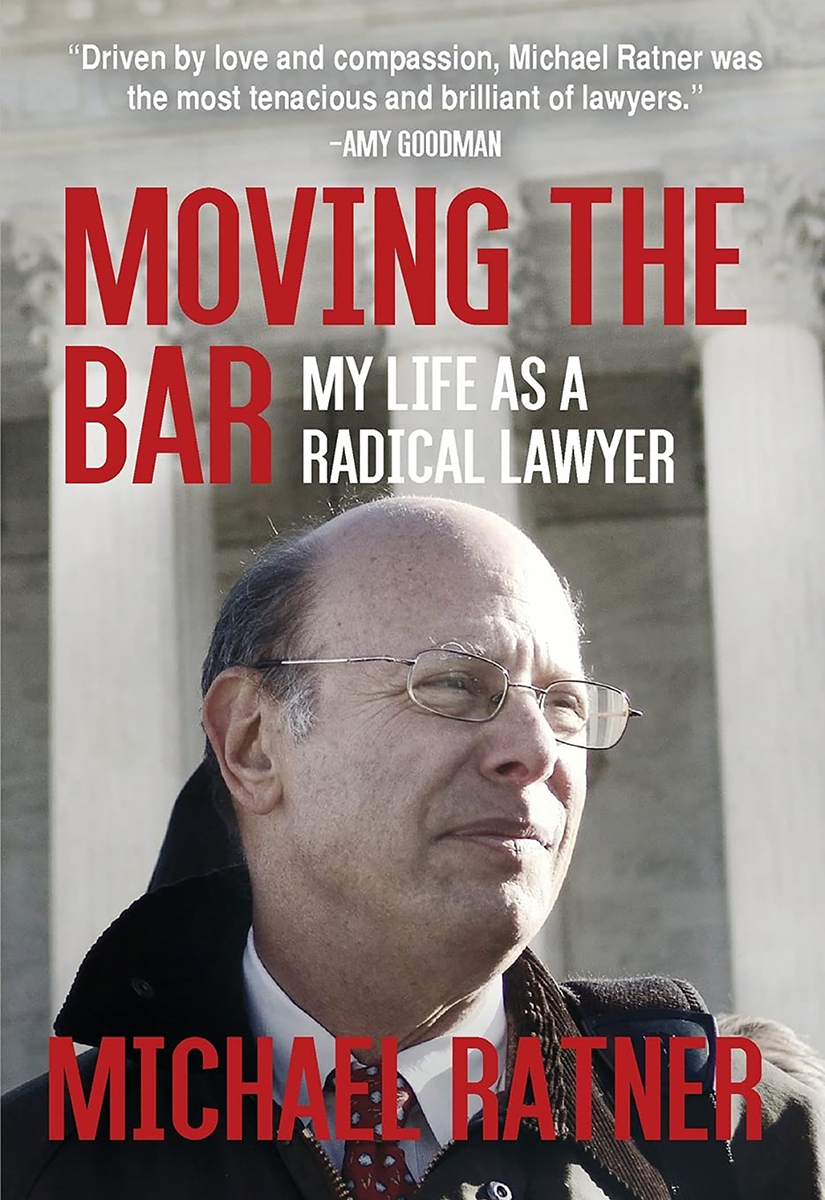 MICHAEL RATNER (1943-2016) was a trailblazing radical human rights lawyer whose work sets a standard for a lawyer’s role in left political movements. His autobiography Moving the Bar, published five years after his passing, is a story of his life and legal work. It is a valuable guide for activists and attorneys looking to use the law as part of larger movements for justice.

A more traditional lawyer’s autobiography might open with high-minded rhetoric about the sacredness of the law and the Constitution. Ratner immediately shows he is not that type of lawyer, opening with the story of his client Julian Assange, who perhaps more than anyone else in the 21st century has exposed the hypocrisy of “the West” and the values its legal systems claim to uphold.

Ratner details the viciousness of U.S. war crimes and other machinations exposed by Wikileaks and Assange, the savagery the government unleashed upon Assange under the imprimatur of the law, and the monumental uphill battle of serving as Assange’s attorney.

Ratner similarly describes whistleblower Jeremy Hammond, arrested at age 27 and sentenced to 10 years in prison for hacking into servers from the corporate spy firm Stratfor and turning over millions of their emails to WikiLeaks. He describes the military’s horrific torture of Chelsea Manning, all facilitated by the legal system, in retaliation for her exposing U.S. war crimes, and the wider increasing state repression against whistleblowers under the Espionage Act.

Ratner’s opening illustrations show the legal system not as some neutral forum but itself as an instrument of state repression. It takes a special brand of tenacity for a radical lawyer to use the law, designed in so many ways to codify unequal power relationships, as a battleground to challenge those power relationships. Indeed, Ratner has shown that a radical lawyer must face often impossible odds, and get back up to keep fighting. His autobiography provides valuable insight from his role as part of the legal arm of movement.

“Law was logical. If you understood the relevant precedents, there was always a right answer that could be worked out. A judge’s job, it seemed to me then, was straightforward: to understand the law and then apply it to each new set of facts. The notion that other factors might enter into decisions never occurred to me.”

Ratner soon acquired a very different view of the law, organizing as a student against Columbia’s cooperation with federal agencies in the Vietnam War, and against Columbia’s construction of a gymnasium in Harlem that essentially segregated students from the predominantly Black neighborhood residents. He was assaulted by police while peacefully demonstrating.

Students shut down the University, and the Center for Constitutional Rights (CCR, the powerhouse legal advocacy organization founded in 1966 by the legendary William Kunstler and Arthur Kinoy) filed suit against the University on behalf of disciplined students. While ultimately unsuccessful in court, this lawsuit was very effective in granting political legitimacy and support to the students’ struggle.

Ratner would later become the longtime President and Legal Director for CCR, where he utilized this style of activist lawyering to great effect.

The hallmark of Ratner’s work was to use litigation as a political tool, to provide a platform to shift political consciousness and power. With his understanding that the larger struggle supersedes the narrow confines of a lawsuit, even longshot cases that were “unwinnable” on the legal merits can serve this wider political purpose.

Of course, taking difficult political cases in an often inherently regressive judicial venue requires a radical lawyer to take a punch and get back up again. Ratner describes his very first court appearance as a lawyer, representing prisoners in the 1971 Attica uprising. After his meticulous preparation for oral argument, the reactionary judge immediately ruled against him without even allowing him to present his arguments.

Ratner recounted another punch in the case of Palmer v. Thompson, where CCR challenged the constitutionality of Jackson, Mississippi’s closing of its public pools rather than opening them to Black residents, and then giving its last open pool to the YMCA in order to preserve segregation. The U.S. Supreme Court refused to find this obviously racist act unconstitutional.

Ratner attributed this regressive decision largely to the fact that the civil rights struggles in the South had largely died down by 1971 when the case was decided. Without the pressure of an organized mass movement, the Supreme Court quickly regressed from its positive civil rights decisions in the 1950s and ’60s.

Later in the 1980s in Crockett v. Reagan, Ratner challenged the legality of the United States sending its military to assist the rightwing government of El Salvador in committing atrocities against Salvadorans. While the court acknowledged the validity of Ratner’s argument that the government lacked the required congressional approval to take this action, it dismissed the case — because the plaintiffs failed to meet the impossible task of identifying precisely where in El Salvador the U.S. military was sent, or exactly what they were doing.

Ratner’s work often yielded great political and legal advances, which deserve both celebration and study. In the reactionary post-9/11 political climate, CCR was one of the few legal organizations to stand up for civil liberties of Guantanamo detainees (in fact, Ratner details how he represented unjustly imprisoned Haitian Guantanamo detainees long before 9/11).

When other left-leaning organizations shied away from accusations of “defending terrorists,” CCR’s principled stand elevated this freedom struggle, and exposed the prisoners’ shocking torture and the military’s sham “combatant status review tribunals.” CCR led a massive pro bono recruitment of attorneys from all sectors of the legal profession to represent Guantanamo detainees, which ultimately freed many from unjust detention.

CCR even won a landmark legal victory in Rasul v. Bush, where the Supreme Court ruled that Guantanamo detainees had the right to challenge their detention as unconstitutional.

In another unorthodox victory, Ratner details suing the ex-Guatemalan defense minister Héctor Gramajo for atrocities he committed against Indigenous Guatemalans. Gramajo, a close U.S. ally on a fast track to fulfilling greater rightwing political ambitions, was then attending Harvard, and CCR served him with the lawsuit in dramatic fashion at his Harvard graduation ceremony.

CCR eventually obtained a $47.5 million judgment against Gramajo for his crimes. Although the judgment was not collectible, the lawsuit succeeded in sinking Gramajo’s political career.

The Clarence Darrows of the world often take much of the legal spotlight for their dramatic jury trial advocacy. Less appreciated is Ratner’s style of legal brilliance — the ability to craft powerful unorthodox legal strategies in service of the movement. Nowhere is this better illustrated than CCR’s 1979 defense of Puerto Rico anticolonial activists convicted of “trespassing” during a protest outside a U.S. naval base on the Puerto Rican island of Vieques, where the Navy conducted unpopular practice bombings.

The activists were sentenced to prison for the six-month maximum for these misdemeanors, with one prisoner, Angel Rodríguez Cristóbal, dying in prison by “suicide” under highly suspicious circumstances. CCR’s appeal of the convictions rested on an unorthodox technical argument about where the property for the military base began, which according to maps and the old property deed from Spain, was delineated by the “high water mark,” an ambiguous designation dependent on the difference between wet sand and dry sand and the highest winter tide over the previous 18 years.

CCR raised a serious question whether the protests actually occurred on the naval base property, and the court reversed the convictions on appeal. It is harder to find a more impressively unorthodox case of “getting off on a technicality” than this.

Moving the Bar is also a story of left political eclecticism, both in Ratner’s own development and his work within the broader legal community. Early in his career, Ratner clerked for Judge Constance Baker Motley, then the only Black woman on the federal bench. Although the newly radicalized Ratner was to the left of Judge Motley’s liberal institution-minded politics, he admired her jurisprudence, informed by her opposition to the firsthand racism and sexism she faced throughout her life.

In one unexpected degree of connection, Ratner recalled working closely with the Judge to grant an emergency motion filed by young incarcerated Black Panther Afeni Shakur, who challenged the prison’s denial of access to her own doctor to treat her pregnancy. Recognizing the prison’s unjust actions, Judge Motley ruled for Ameni Shakur, who soon after gave birth to the legendary rapper Tupac Shakur.

Ratner describes the wide scope of his own development and his role in important debates within the left legal community. He charts his movement from a Zionist who “fundraised for Israel in the wake of the 1967 [Six Day] war without a second thought” in law school, to a stalwart voice for Palestinian solidarity, playing a key role decades later in the formation of the important advocacy organization Palestine Legal. He recalled his reconsidered respect for the struggle of the Indigenous Miskito people of Nicaragua, which in the 1980s he had considered counter-revolutionary due to their opposition to the Sandinista government.

Ratner recalled the debates within CCR whether to pursue legal action against the Serbian war criminal Radovan Karadži?.

Although Ratner believed Karadži? was guilty of war crimes, Ratner opposed CCR bringing a case against him because doing so aligned with U.S. imperialist efforts to exploit and fracture the former Yugoslavia’s ethnic divisions, efforts that had nothing to do with human rights.

Others in CCR disagreed, and CCR took the case, although the dispute was serious enough for CCR advisory board member Ramsey Clark not only to be removed from the board, but to directly represent Karadži? in opposition to CCR.

Ratner’s explication of these difficult disputes shows he did not intend his autobiography to be a simple cinematic narrative, but rather the honest considerations of a serious activist immersed in the struggle. We should respect his sincerity and learn from it.

Moving the Bar is filled with a lifetime of wisdom, inspiration, lawyers’ war stories, and movement activism, of which this review only scratches the surface. While this book is accessible for anyone interested in movement work, it provides particularly valuable guidance to radical-minded attorneys seeking to navigate the tension between working within the law and serving the radical politics that seek to break through the legal strictures of white supremacy and capitalism.

Ratner exemplifies the ability to do this without subordinating radical politics to the regressive tendencies of the legal system, and to fulfill one’s full potential as a movement lawyer.