THE FULL FRONTAL assault on public workers and their unions in one state after another — stripping collective bargaining rights and dues checkoff, slashing wages and pensions and health benefits, abolishing seniority and tenure for teachers, mandating yearly decertification votes, threatening jail terms for strikers — is as massive and instantaneous as it was unexpected by the labor bureaucracy and many union members. To say “the class war is back” is an understatement. It’s an authentic firestorm sucking the oxygen from labor rights, from Wisconsin to Ohio, Michigan, Indiana and other states.

In an act of symbolic vandalism, Maine’s governor proposes has removed the mural depicting the state’s labor history and will purge the name of Frances Perkins, Franklin Roosevelt’s New Deal-era Secretary of Labor, from the state’s labor department building....

A Whiff of Jim Crow

THE REPUBLICAN PARTY and its rightwing base are on a concerted drive to suppress the vote in coming elections. The targets are African Americans, other ethnic minorities, the elderly and young.

Bogeyman reasons are given to justify these broadside attempts to suppress the voting rights of these groups. The number one tactic is to charge “ID fraud” aimed at poor Blacks and Latinos, and so-called illegal immigrants.

The Republican governors and state legislators (now aligned with the most extreme elements of the Tea Party movement) made this a priority after the 2008 presidential election....

One Year of the BP Blowout

IN THE YEARS after Hurricane Katrina, I saw New Orleanians suffer from lack of health care. The storm and subsequent flooding caused immediate illness, with infections from the foul flood water and debris. As time passed, ever-present mold exacerbated respiratory conditions and mental health deteriorated in the face of immense stress.

We are far from healed: a report in April 2011, well over five years out, shows hospitalization rates for heart attacks still above pre-Katrina levels....

Tokyo Letter: After the Disaster

They want us to believe
that none of this could have been foreseen
but the sky has a familiar feel,
like the itch of black rain.
It was all just a goddamn lie,
Now I feel like I’ve gotta do something.
—Saito Kazuyoshi, “Zutto Uso Datta”
(It was all just a lie.)

(Facebook status update) Friday March 11, 3:26pm: Everybody in our family fine, but things got a little shaky.(1)

JUST BEFORE 3PM on March 11th, I was standing in the intersection of two small streets in central Tokyo, saying goodbye to my partner before leaving for a work trip....

WHAT DID THEY know and when did we know it?

At a cost of over ten billion yen, the Japanese government created a system for detection and prediction of the spread of radiation in the event of a nuclear accident. Known by its acronym “SPEEDI” the System for Prediction of Environmental Emergency Dose Information was up and running when the earthquake struck. It had been used to monitor North Korean nuclear testing and gases from erupting volcanoes. But the government did not release any of its information until late in March and then only in bits and pieces. The full, hour by hour data for the nuclear crisis from the first hours on was not released until late April....

AGAINST THE CURRENT interviewed Canadian author and activist Todd Gordon on April 29, 2011, shortly before the May 2 national election in Canada. Gordon is the author of Imperialist Canada (Winnipeg: Arbeiter Ring Publishing, 2010). We followed up with additional questions after the election.

Against the Current: Broadly speaking, does Canada act pretty much strictly as a junior partner of the U.S. empire, or does it have its own partial agenda in certain arenas?

Todd Gordon: I think Canada is an imperial power in its own right, and although it often follows the American lead (though not always, such as with the 2003 Iraq War), its foreign policy is driven by the objective interests of Canadian capital....

Brief Theory of the Present Crisis

THIS ARTICLE IS is a summary and development of the argument that I have been writing in the journal Critique, both in the Critique Notes and a number of articles. I have left out two issues discussed in Critique, that of the case against the falling rate of profit as the only or fundamental cause and why the ruling class has opted for austerity.(1)

The Marxist theory of crisis has languished in the post-World War II period, largely because there was no real crisis until now. As Marx famously put it: “The world trade crises must be regarded as the real concentration and forcible adjustment of all the contradictions of bourgeois economy.”(2)... 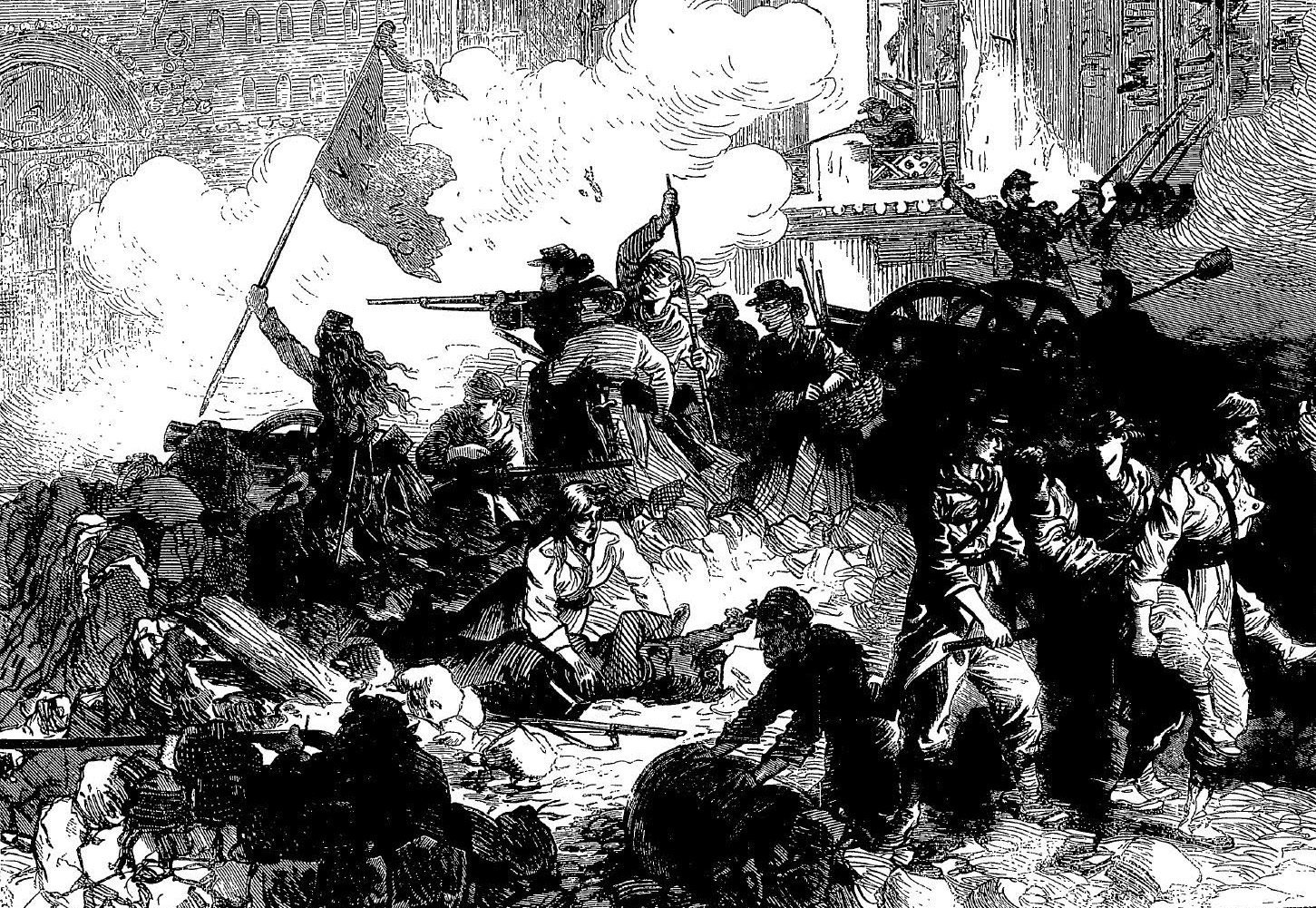 ATC IS REMEMBERING the 150th anniversary of the Paris Commune with this article from decade ago.

THIS SPRING MARKS the 140th anniversary of the revolt that led to the establishment of the world’s first workers’ government, the Paris Commune of 1871. The Paris Commune has always had a special place in the hearts and minds of revolutionaries, and can inspire today’s activist generation with the potential for “power to the people.”

Anniversaries of the Commune, like other anniversaries of notable events in socialist and labor history, have been occasions to celebrate working-class struggles and recall their lessons. The articles, books, pamphlets and public meetings produced on these anniversaries help preserve the memory of these events. In this way, these historical experiences and their lessons become part of the collective memory of the working class, even part of an oppositional working-class culture.

Women in the Paris Commune

DURING THE SEIGE of Paris, women organized their own Vigilance Committee in Montmartre, the political center of the working class. La Révolution politique et sociale devoted a major portion of its pages to reporting on the Vigilance Committee and a variety of women’s clubs and societies. This included the Union des Femmes, the women’s union that was a section of the First International.

Topics ranged from the role of women in the revolution, women’s right to divorce, to discussions on how bosses defrauded women of their wages and how women were subjected to the authority of the Catholic Church....

A Winter's Tale Told in Memoirs

THIS ESSAY IS dedicated to the memory of George Breitman (1916-86), who taught me never to take anyone's word for it.

THE SOCIALIST WORKERS (SWP), now a curious sidebar in the history of radicalism, is a linear descendant of the political movement initiated in the United States by pro-Bolshevik followers of Leon Trotsky on the eve of the Great Depression.(1) For 45 years, until the mid-1970s, the movement associated with the SWP was at the crossroads of the Far Left.

Although smaller in numbers than the Communist Party, and often the Socialist Party, the SWP enjoyed a moral authority, political acuity and signal professionalism that brought it disproportionate influence in the union movement and Marxist culture that lasted for decades....

IN CITIES ACROSS America, young men from low-income communities are ending up in prison more than they are making it to college — at the rate of seven to one. And during the nation’s protracted economic slump and high rate of unemployment, especially among African Americans and Latino Americans, we can expect that ratio to grow.

In light of the proposed budget cuts, educational funding is expected to suffer some very deep cuts. Those hit the hardest will be children and young teens from poor and minority school districts throughout Pennsylvania. While many parents are fearful of the consequences from such drastic actions, few have offered alternative solutions to help fund educational opportunities for the children....

THE DEBATE AMONG antiwar activists on the necessity and movement-building effectiveness of mass demonstrations has been ongoing since the mid-1960s during the Vietnam War, and is not likely to be settled soon. I want to comment here on a related but different argument raised by David Grosser in his stimulating article on antiwar organizing strategy (ATC 150).

The author proposes, in partial counterposition to the tradition of coalition-sponsored “mass demos” whose energy seems to dissipate in the aftermath, the need to “build a real national organization” that can undertake nationally coordinated campaigns, whether that means Congressional pressure or other concentrations, as well as enabling “wide-ranging democratic discussion and debate” resulting in decisions that are carried out....

A Rejoinder on Antiwar Strategy

LET ME FIRST restate as concisely as I can the main points of my essay “A New Strategy for Antiwar Organizing: Going Where the Millions Are” (ATC 150, January-February 2011).

First, despite its current low ebb, antiwar activists can rebuild the movement because the wars and occupations are, in fact, already opposed by a majority of the population. Rebuilding the movement requires mobilizing that up-to-now inactive opposition. However, the movement’s continued exclusive reliance on periodic “mass” mobilizations in a few big cities (like the recent April demonstrations in New York and San Francisco) is poorly suited to that task....

ACROSS THE COUNTRY corrections department officials and captains of the incarceration industry are in crisis....

BACK IN 1937, as fascism seemed poised to seize power in much of Europe, George Orwell noted in A Road to Wigan Pier that a “genuinely revolutionary socialism” would have no chance of reversing the tide unless its supporters put aside their factionalism....

The SEIU as Case Study

The Civil Wars in U.S. Labor
Birth of a New Workers Movement or Death Throes of the Old?
By Steve Early
Chicago: Haymarket Books, 2011, 440 pages,
$17 paperback.

ABOUT 40 YEARS ago I had a job in a rubber molding factory in Easthampton, Massachusetts, where the union in the shop was the IUE (International Union of Electrical Workers). We all knew that there were negotiations going on between the Company and the Union, but we were never told what was happening.

This was at the time when there existed rank-and-file union caucuses fighting for democracy. I began to circulate a petition asking the union to let us know what was happening....

The Union in Academia

CARY NELSON IS a distinguished professor of English and the president of the American Association of University Professors (AAUP), a group that is part professional association and part union. This book is perhaps half about academic freedom and half about the AAUP, and Nelson’s struggles to have it become a less staff-dominated institution.

Very much to his credit, Nelson has an expansive conception of academic freedom....

LEN WAS NOT a ’60s radical. He was something more unusual, a ’50s radical. He developed his values, critical thinking and world view in a time when non-conforming was rare. He told a newspaper interviewer in Santa Barbara in l980 that “I would classify myself as a radical American. I am anti-capitalist in this sense — I don’t believe capitalism is now compatible with democracy.”

The third of four children, Leonard Weinglass grew up in a Jewish community of 200 families in Bellville, N.J. and attended high school in nearby Kearney, where he was a star end on the football team and Vice-President of his high school class. He went on to George Washington University in D.C. on a scholarship....

[The numerous works of the late Manning Marable are listed at http://www.ranker.com/list/manning-marable-books-and-stories-and-written-works/reference. We will present a review of his study of Malcolm X in a coming issue. We’re pleased to present this brief tribute here. — The editors of Against the Current]

MALCOLM X HAS been getting quite a bit of the attention lately, especially with respect to A Life of Reinvention — and deservedly so — but as Professor Marable himself would tell you, no one shaped his intellectual development more than W.E.B. Du Bois....

THOSE WORDS, AMONG the most famous uttered by him, accompanied by congas, ushered Gil Scott Heron into the public consciousness. Perhaps his best known work, it was not his best. But even though the track and the album are marred and dated by its sexism (“hairy armed women’s liberationists”), homophobia (“The Subject Was Faggots”), and references to TV ads that haven’t been seen since the days of the rotary dial phone, the essential message of “The Revolution Will Not Be Televised” is still relevant: the revolution can be commercialized....